When I was a wee lad (way back in the ‘90s), I wanted to be like Michael Jordan. With my Air Jordan sneakers tied tight, I’d jack up buzzer-beaters like try-hards at the Y, “3...2...1...EHH!” Brick. Airball. Nothing but backboard. Now, I’d sink one of those Hail Mary’s eventually. After all, it’s nothing that moving the goal post can’t solve, but motorcycling can definitely have the same effect on full-grown adults.

Whether you feel like Charley and Ewan exploring remote regions on a BMW R 1250 GS (we won’t even get into the LiveWires) or trying to drag an elbow like Marc Marquez on a CBR1000RR, we all daydream sometimes. Of course, when I got my hands on a Honda CRF250L Rally, it was no different. Fantasies of sending it over sand dunes and conquering the Dakar Rally like Ricky Brabec instantly flooded my brain. Call it arrested development, call it Walter Smitty syndrome, but the quarter-liter dual-sport promptly filled me with images of grandeur, even if I didn’t have the off-road chops to back it up.

Starting with the base CRF250L, Honda upgraded the suspension, increasing travel at the front by 1.2 inches and .9 inches at the rear. The equipment still resides in budget territory, but the extra length results in a towering 11 inches of travel fore and 10.3 inches aft. No, neither fork nor shock offer adjustability, and the Flubber-soft springs wouldn’t stand up to actual rally raid conditions, but they certainly recall those long-legged desert sleds in the Dakar.

To complete the rally aesthetic, Team Red added a larger 2.7-gallon gas tank and some surprisingly accurate fairings and HRC graphics. From the belly pan to the windscreen to the fork covers, Honda nailed the styling on the CRF250L Rally. Aside from missing a few Monster Energy and Motul decals and a race number slapped on the side, it's spot on. The 250 Rally isn’t a replica model but most wouldn’t be able to tell the two apart at a glance.

Yes, the bike undoubtedly looks the part, but it differs from the race rig it’s imitating in countless ways. Retaining the same DOHC, four-valve 249.6cc single from the CRF250L, the Rally doesn’t gain any extra power but certainly gains extra weight (25 pounds to be exact) thanks to the larger tank, extra bodywork, and taller suspension. In addition to the suspension swap, Honda relaxed the rake to 28 degrees but the seat height gets more aggressive at a lofty 35.2 inches (+.8 inches).

The CRF250L Rally also gains a beefier front brake setup with a 296mm rotor replacing the 256mm disc and a two-piston caliper stepping in for the base model’s single-piston clamper. The rear’s 220mm disc and single-piston caliper stay consistent across the two variants and the six-speed transmission carries over as well. While the dual-sport’s adherence to road regulations hampers its performance figures (compared to the CRF450 Rally), the street-legal bike has just that on its competition counterpart—road access.

By its nature, a dual-sport motorcycle is a compromise. Some sacrifice street handling for dirt worthiness while others opt for the opposite. If Honda’s tire choice is any indication, the engineers believe CRF250L Rally riders will spend more time on the tarmac than the trails. The IRC GP-21 (front) and GP-22 (rear) tires come rated at a 70/30 road bias and my time with the 250 Rally reflected that ratio. As a car-less city dweller, getting to the trail was more than half the journey and the CRF got a steady diet of asphalt in our time together.

Most of the mile-munching occurred in the labyrinth of Los Angeles freeways. The quarter-liter single generated just enough oomph for highway speeds but keeping up with speed-happy Angelenos was another story. At 70 mph in sixth gear, the 250 Rally chugged along at just over 7,000 rpm. That seemed to be the sweet spot because a speed wobble developed soon after at around 75 mph. It’s nothing that clenching the tank with my knees couldn't remedy, but it certainly discouraged me from pushing to the 10,500 rpm redline.

For that reason, I kept my interstate stints as short as possible. Luckily, Los Angeles has just as many canyon roads as freeways and they quickly became my preferred route on the power-starved Honda. Despite the soft suspension and knobby tires, the Rally tackled the twisties quite well. I fully expected the spongey suspenders to lack feel and wallow in the corners. Instead, the fork was responsive when tipping side to side, and only pavement undulations activated the rear shock’s buoyant behavior.

The larger gas tank also provided the perfect perch for my knee when the bike was at lean. No, you’re not going to drag parts (body parts or bike parts) while riding the 250 Rally through the esses but it sure delivered more confidence than most knobby-shodded dual-sports. Unsurprisingly, the front brake lacked initial bite. Surprisingly, it provided a progressive feel and was quite communicative beyond the first lever pull. Of course, once you’ve reached the trailhead, you’ll want to switch to using the rear brake primarily and the switchable rear ABS makes that transition nearly seamless.

Stopping to ask for directions. Photo by Gideon Perez.

The CRF250L Rally is in its natural habitat off the beaten path. Standing on the pegs, the handlebars come up to prevent the rider from hunching over too far. The 2.7-gallon tank bows outward to meet the knees in their natural position. The 249cc engine keeps things manageable for green off-roaders such as myself. All those features contribute to a package that’s ultimately user-friendly even if it comes at the expense of sex appeal.

Honda’s reputation for making “vanilla” bikes could easily apply to the CRF250L Rally—if it weren’t so much fun off-road. Let’s be honest, it’s not ripping power wheelies in third, second, or even first for that matter. It's not sporting top-of-the-line suspension or high-performance tires, but if you can’t have a blast breaking the rear end loose on a 346-pound dual-sport, I’m not sure what bike isn’t “vanilla”.

Living out my Dakar dreams. Photo by Gideon Perez.

At El Mirage Lake, a six-mile-long dry lake bed in San Bernadino County, the 250 Rally lived up to its name. The supple suspension soaked up terrain irregularities like a sponge and the enduro ergonomics put me in complete control. It’s here that I felt like a Dakar champion, battling the elements, the clock, and fellow competitors for desert supremacy. I envisioned myself as Ricky Brabec completing the 12th stage in the 2020 Dakar and bringing the first Dakar trophy home to America. Like a pair of Jordan sneakers, the CRF250L Rally offers a small dose of vicarious living, and out in the desert, the Rally delivered on its promise.

After racing along the hardpack surface for a few hours, we decided to explore the paths along the lake bed’s periphery. That’s where we encountered the CRF’s nemesis: deep sand. On tarmac and fire roads, the Rally’s soft suspension rose to the occasion, providing just enough response in spite of the cushy damping. Faced with loose sand, however, the fork felt like riding atop two pool noodles. Though my friend was navigating a 410-pound Yamaha XSR700 (with Pirelli Scorpion Rally STRs) through the same sandy conditions, I could only go marginally further on the trail before turning around in defeat.

The problem only compounded when I hit some local trails plagued with the same treacherous washouts and sandpits. Adding steep inclines to the equation not only tested the 250 Rally but also my limited off-road skills and resolve. After descending what seemed to be an impossibly steep trail, I found myself at the bottom of a bowl with the only option of climbing back up or taking the long way around. For what seemed like hours, I repeatedly tried—and failed—to surmount the dune-like hill.

Each attempt ended with a tip-over that left me hoisting the 346-pound dual-sport upright on the side of a precipitous hill and retreating to the bottom for another go. Those 25 extra pounds sure made their presence known then. Attempt after attempt ended with the same result. If the front end didn’t tuck the back spun up. If I found a good line, the whoops and sand traps gobbled up my momentum. Eventually, I had to give up the ghost and take the long way out. The combination of my remedial off-roading skills and the budget suspension was just too much for the little road-legal bike to overcome.

On the other hand, my crestfallen trundle down the hill provided ample opportunities for testing the rear brake. Of course, I typically slammed on the pedal when I wanted to slide the rear around but controlling the grip required a more nuanced application. Descending the steep grade, I could instantly tell when the rear tire started breaking loose, and it wasn’t one of those nail-biting, back-end coming around moments either. In this case, the slide helped me guide the CRF around the bend, controlled and confident.

Now, you wouldn’t be wrong if you thought the 250 Rally’s rear brake was on the chintzy side. However, the budget caliper does its job admirably despite the lack of Brembo branding. It sure doesn’t have the strength or feel of high-spec binders, but it’s predictable and doesn’t produce that on/off dichotomy in other equipment. Returning to safety, I thanked my stars for that rear brake before switching the rear ABS back on and hitting the road.

At $6,249, the Honda CRF250L Rally is a viable option for getting into off-road riding. Everything from the tractable power delivery to the compliant suspension caters to the budding adventurer. However, the Rally version doesn’t quite justify its $1,150-markup over the base CRF250L. The longer suspension doesn’t tackle terrain more aggressively, it just perches the pilot higher in the cockpit. The stronger front brake doesn’t help much on the trail and the rally-esque styling is more of a design exercise than anything else.

The windscreen and larger tank may help if long stretches of highway separate you from the trailhead, but the 250 Rally isn’t that great on the interstate either. The Rally’s limitations are nearly the same as the base CRF and customers might be better off saving the extra coin for an upgrade to the CRF450RL (when they’re ready, of course). On the other hand, if you love the rally look and don’t see yourself moving up to a full-size dual-sport anytime soon (if at all) the CRF250L Rally is a solid all-arounder. After all, the base CRF250L won’t deliver on those Dakar daydreams and sometimes we all just need a bike that provides a little escape. 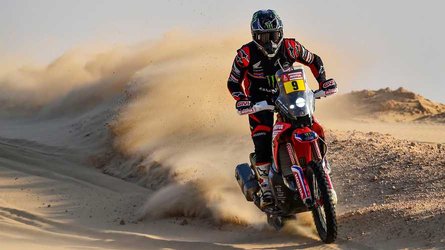 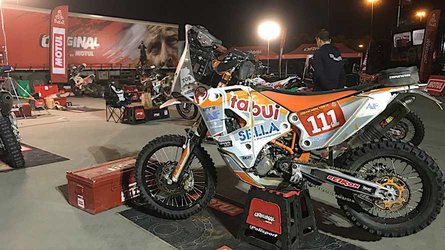 Dakar 2021 Is Coming To Your Phone In Augmented Reality
By: Dustin Wheelen
++
++
Got a tip for us? Email: tips@rideapart.com