Two weeks ago, if you'd asked me to pick the perfect bike to do a 1000 mile week on, through some of California’s best roads with stints of highway in between, the new 2013 Honda CB500F ABS probably wouldn’t make the list of potential bikes. It’s a bike we journalists have found trendy to include in top 10’s for beginners or top 10 for under 6K. So how did it become one of the best bikes for this particular job. 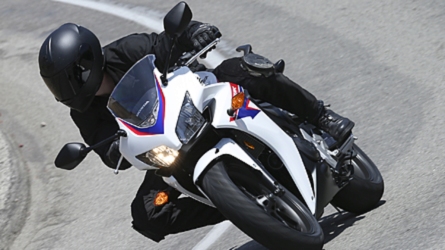 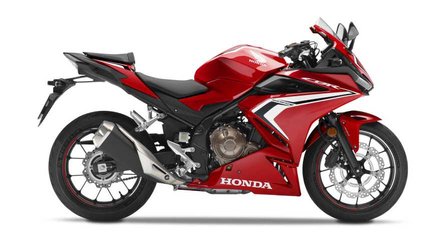 By now, you should have already read Wes’s review on the 2013 Honda CBR500R from the same trip. If not, go read it; if so you know that Honda just released three motorcycles based on this new 471cc, 47 bhp, liquid-cooled parallel-twin engine. 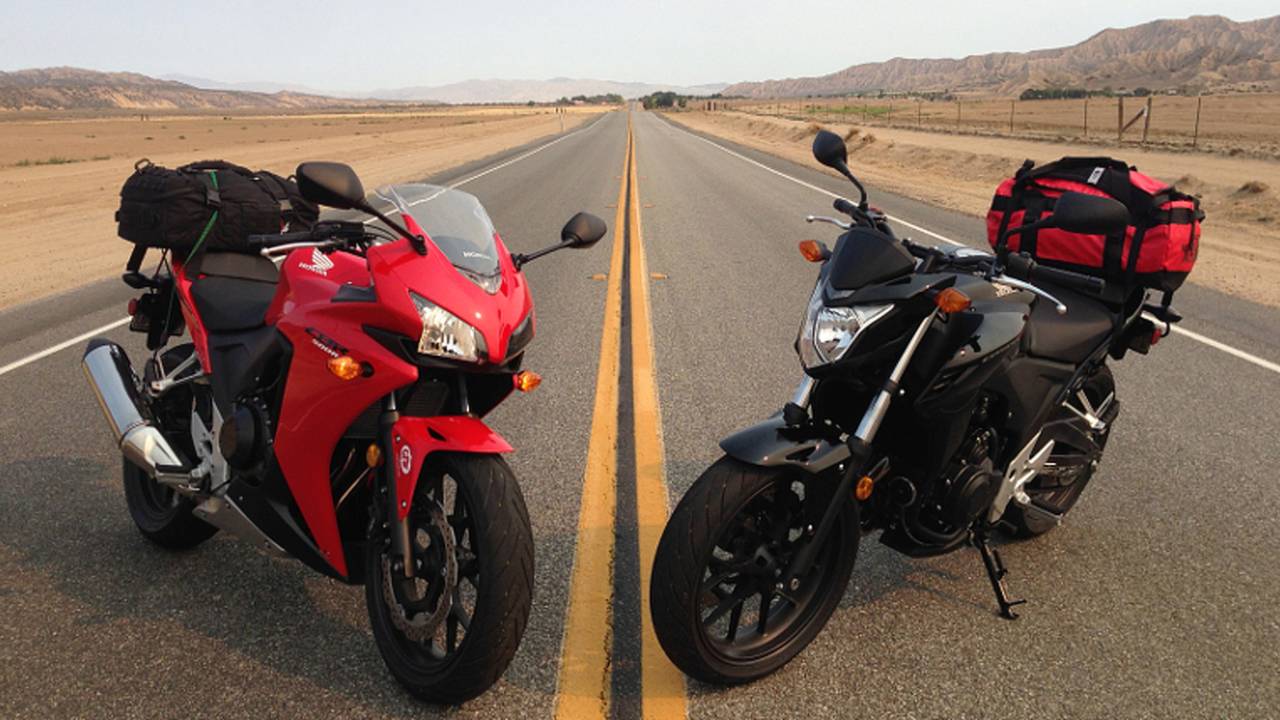 The only differences from CBR to CB are the lack of a windscreen, lack of fairings, and more upright bars. If I’m splitting hairs, the seat felt a little more plush as well than the CBR500R, but may have also been that I only road the 500R at the end of one of the nights and my butt was already plenty sore by then.

Would you believe me if I told you this was the first motorcycle race I've attended? To be honest, I’d never really been interested in going. I’d seen the races on TV and the view looked terrible, you’re so far away and can only see one tiny portion of what’s happening.

Plus, I’m so much more interested in the tech side of motorcycles. I love watching companies produce better and better products and try and compete for market share and I get super into new bikes or gear that find innovative ways to make our experience as riders better. I don’t really care about who wins a race, and the culture of it all doesn’t seem that far removed from NASCAR or a Sturgis rally. Just with Rossi fannypacks in place of foam fingers or facial hair.

Wes promised a fun time, plus it was a good chance for us to hang out with the teams from various companies and brag about how we have the best readership profile in powersports media. Oh, and my family is from Monterey and they are a blast and I figured if everything else sucked I could just go hang out with them. 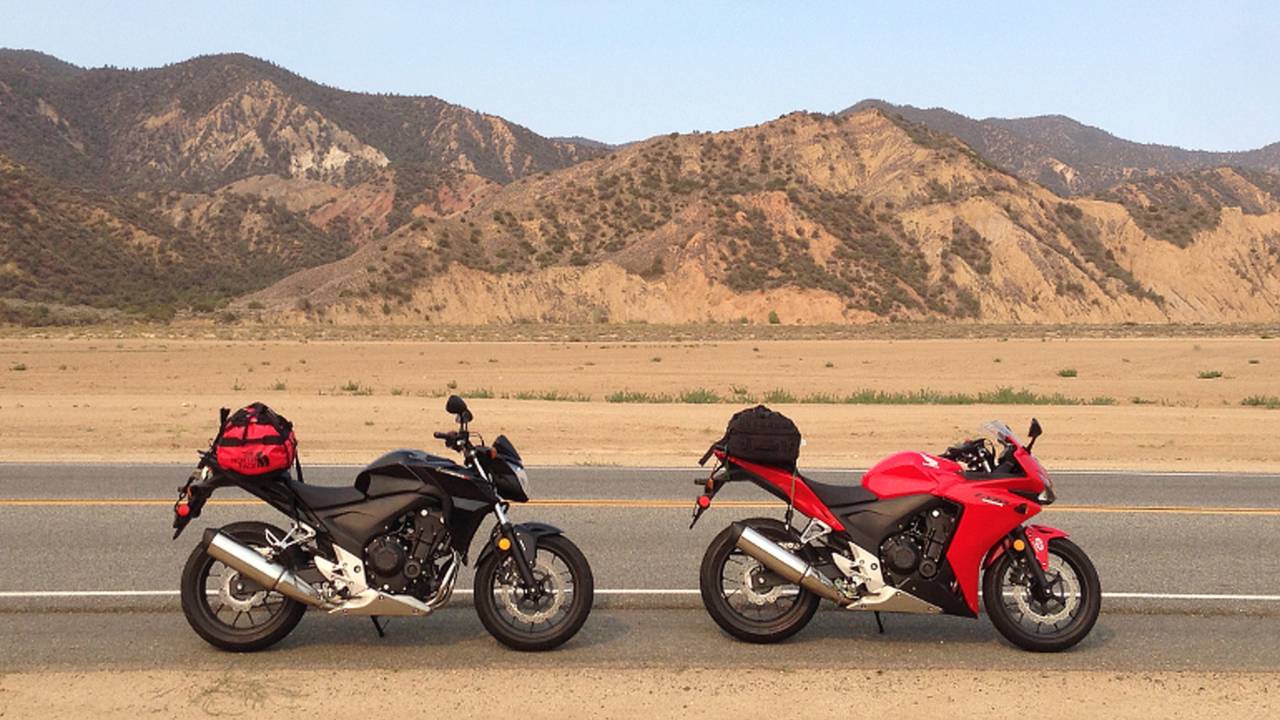 This was also my first ride on the “MotoGP route,” as I usually take the coast up or just get on the freeway and try and get it over with. I packed up my bags early, texted Wes to make sure he was only going to be a little late, and got on the road to meet him in Ojai. We had just picked up the bikes a day or so before and I hadn’t spent any time on it, and was a little worried about how such a small engine would do packed down and with a rider in full gear. While the CB500F has a relatively low top speed, and therefore puts you relatively high in the RPM range while cruising at 80-85mph, I had no problems with my initial highway stint outside of dressing for 100 degree Taft, yet riding through 57 degree Ventura.

From Ojai up the 33 to Taft, then back out the 58 to the 101, then up the 101 to Carmel Valley Road and my family’s place in Monterey, the ride was absolutely stunning. I was mad at myself for never having ridden that route before and was amazed at how beautiful each section of road was.

I can tell I’m already running long, so I’ll just be brief and say I was wrong about MotoGP and it was an awesome weekend and I can’t wait to go to more motorcycle races. I finagled my way into the pits when Marquez was in there, got hooked up huge with a pass onto the track during the two up rides (the most terrifying thing ever), and, even with my GA pass, was able to find a great view of the race.

From there, Wes and I parted ways. He headed back to LA with our friend Cody while I took off to see more family at our cabin near Lake Tahoe.

The ride from Monterey to Pinecrest Lake basically just cuts northeast across the valley, up the 120 and 108 into the Sierra Nevadas. That is the ONLY time during this trip where I actually wished I was on a larger, faster motorcycle. The roads are all two-laners through incredibly flat farmland, and you can literally see any and everything for 30 miles in between the infrequent bends. It was the first time I wished I were one something like the Hayabusa, as I would have been able to sit at 130mph+ for miles without the slightest hint of being unsafe. 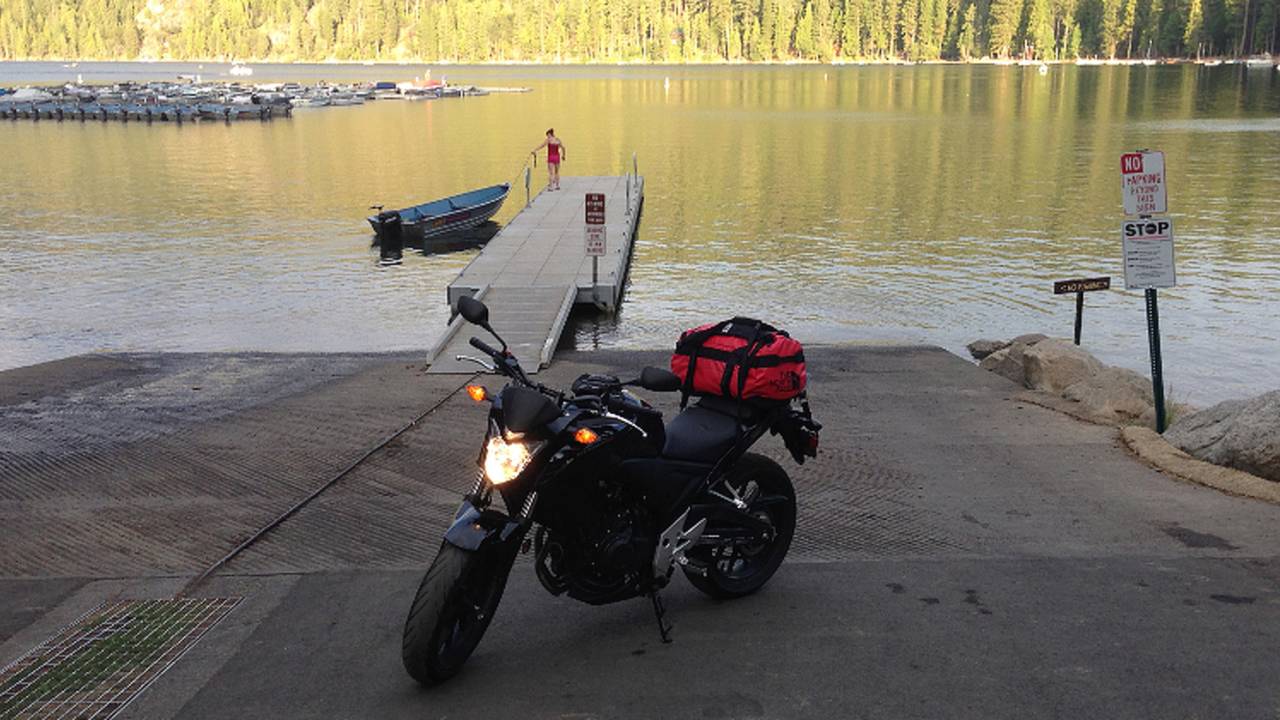 Alas, that isn’t what the CB500F is all about, and as I soon as I hit the base of the mountains I was completely content with it again. As the hills turn to mountains, the long sweepers get tighter and tighter, and the little Honda was equally as happy flat out around a fast sweeper as it was in 2nd when it got really twisty (the fact that the logging industry lobbyists manage to have the roads repaved every other year or so didn’t hurt either). When I arrived, I was happy I had declined Wes’s suggestion we swap for the ride home, as the upright seating position on the CB was perfect for managing the dirt and rock parking lot.

48 hours later, I was back on the bike heading up over the Sonora pass. At almost 10,000 feet and with grades as steep as 26 degrees, it was some of the craziest pavement I’ve ridden. The Honda was absolutely brilliant on all of it, except for their decision to leave off the optional hang glider to make my decent faster. Down the other side, I connected with the 395 and headed for LA, wherein I discovered that there is not a limiter (as Wes suggested) when I hit 107 with a little help from a helpful breeze and the slightest of declines in the pavement. 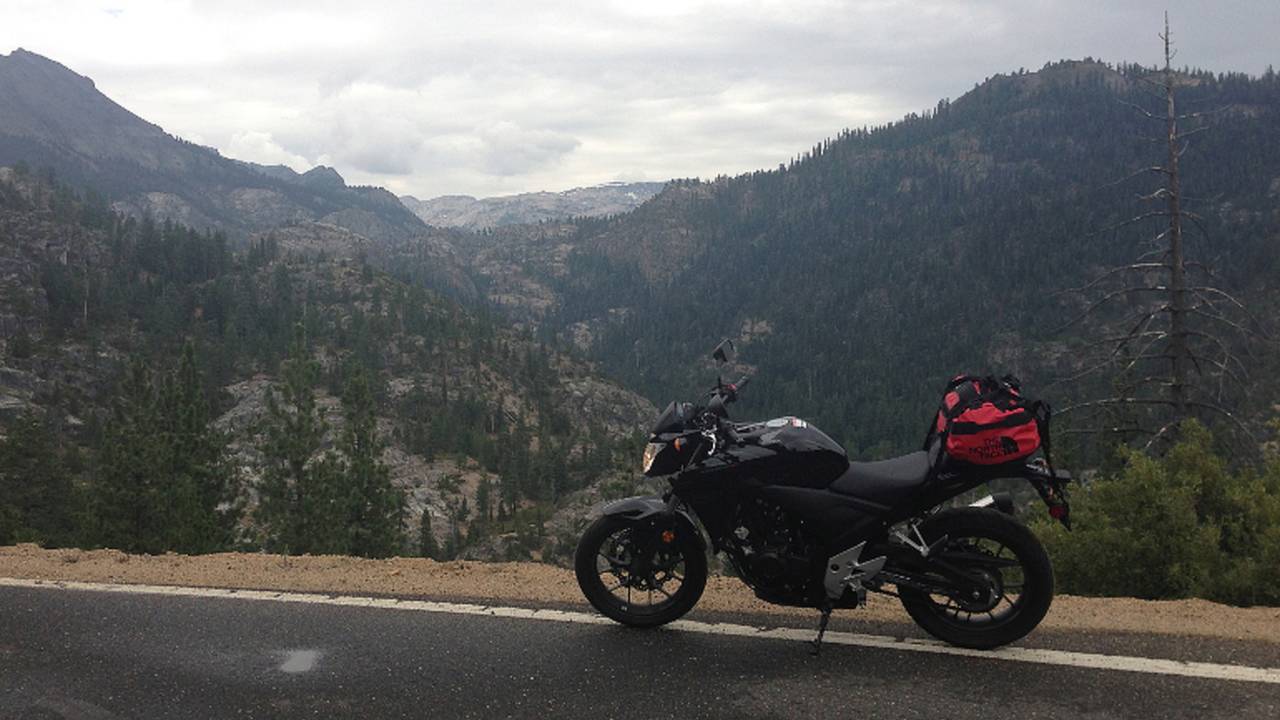 It took me just over 8 hours to make it home from the lake, and while I cannot say I got home feeling comfortable and fantastic, I can say that the only other bike I’ve been able to do that kind of range on is the Goldwing. I’m just a big sissy and pretty much uncomfortable even in a lounge chair or hammock if left for any amount of time, and was incredibly impressed with how well the little Honda met my comfort needs.

I hate agreeing with him, but I think Wes hit it perfectly. The bike is incredibly comfortable. It’s fun to ride and can tackle pretty much every job, from around town to the canyons to long trips. I let a buddy ride it around the block who learned to ride a few months ago and is bike shopping and he couldn’t believe how easy it was to ride; while he was still able to keep up with us on much larger bikes, even when we went on the freeway.

The engine is not huge and does not make a ton of power, but the power is accessible and responsive. The CB500F is incredibly agile, while feeling stiff enough to hold your line in long, fast, sweepers. The brakes do a wonderful job at slowing the bike down and the ABS is incredibly unobtrusive until you really need it.

Personally, I think the size, fit, and finish are all incredible for a bike at this price point. Every person who has ridden it since we’ve had it has commented how they saw their reflection in a window and were struck by how they didn’t look huge on it, and were surprised by how nice it looked.

As Wes mentioned, the instruments were clear and easy to read, and included a number of additional useful measures. The headlight was also a nice surprise, when my ride home to LA turned dark and I was still able to see potholes and debris in our wonderful Los Angeles freeway system.

The CB500F doesn’t have liter bike power or torque.

No one will be impressed that you bought a smart bike instead of a fast one (that’s the whole point, right?).

Preload is nearly impossible to adjust without some wacky tool that is not included, and the tool kit they do include is basically worthless since you need to add so many additional pieces.

Touring would be way more awesome if they could come up with some kind of windscreen accessory to help get some of the wind off your chest. It’s not the kind of thing I would want to leave on unless I was doing a ton of miles, but it would help make the bike better for that sort of application.

Being the data nerd that I am, I too would love to see a temperature gauge. I like to look and see what it says when I can feel a slight shift and it’s nice to have, especially when you’re on a long trip.

Personally, I prefer the CB500F to the CBR500R, as I felt it was a little bit roomier because of the bars and I think it looks the nicest. Plus, it saves you $500. On a bike this fuel efficient, that'll pay for around 8,000 miles of epic trips like this one.

If you want to impress other motorcyclists, this is not the bike for you. If you want something that will run forever, get great gas mileage, stop when you need it to, and still be fun at reasonable speeds, this is an absolutely fantastic option. I agree with Wes that I would choose this over most of the other entry level options for pretty much everyone except the people I know who want to do zero city riding or commuting and just want to be able to come along when we take long trips.

When we first decided to take the 500s to Laguna, I thought it was a really cool story idea and I would put up with any of the bike’s shortcomings for the story’s sake. In hindsight, The CB500F can rub shoulders with any of the other options I would consider with arguments that can be made supporting it. I had a blast riding it and would happily turn around and do it again. 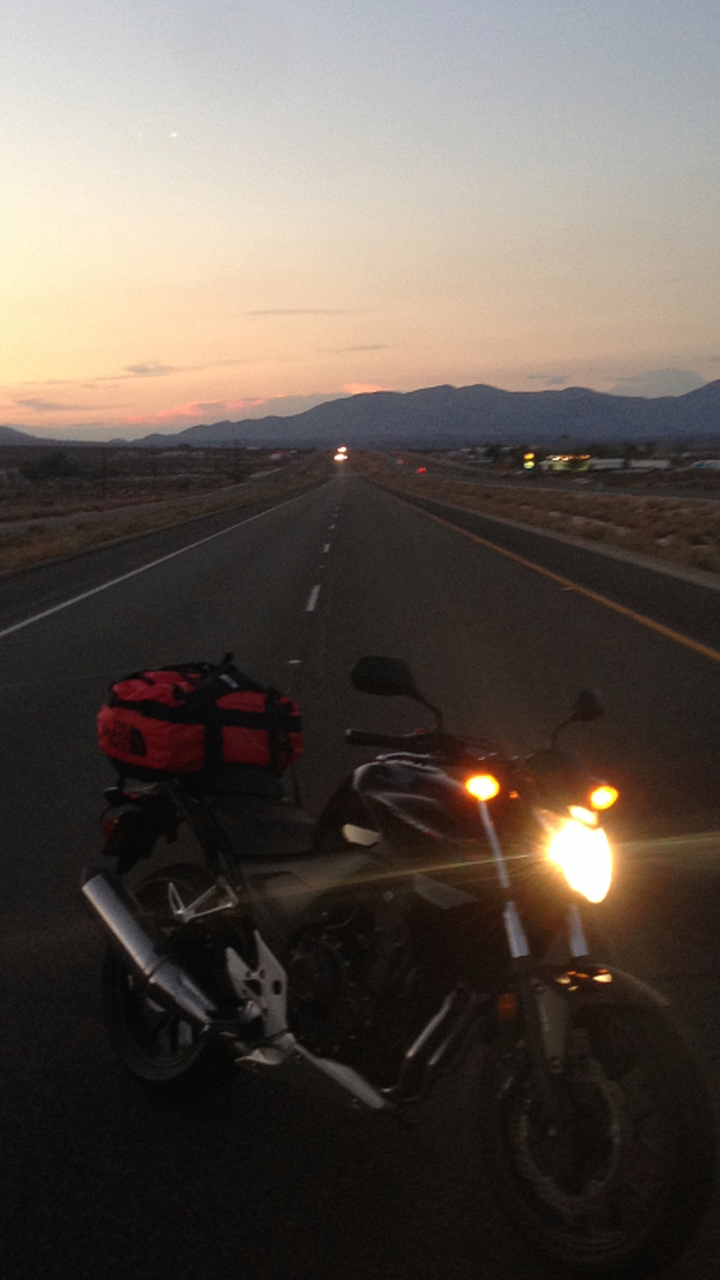 1000 miles on a $5,500 motorcycle that’s completely competent at high speeds, that stops when you need it to and provides tons of fun when the roads allow? I’m sold.

RideApart Rating: 10/10 (I hate giving bikes a perfect score unless I can unequivocally say it can’t be improved but, for 5k, I honestly don’t see how it could be any better).