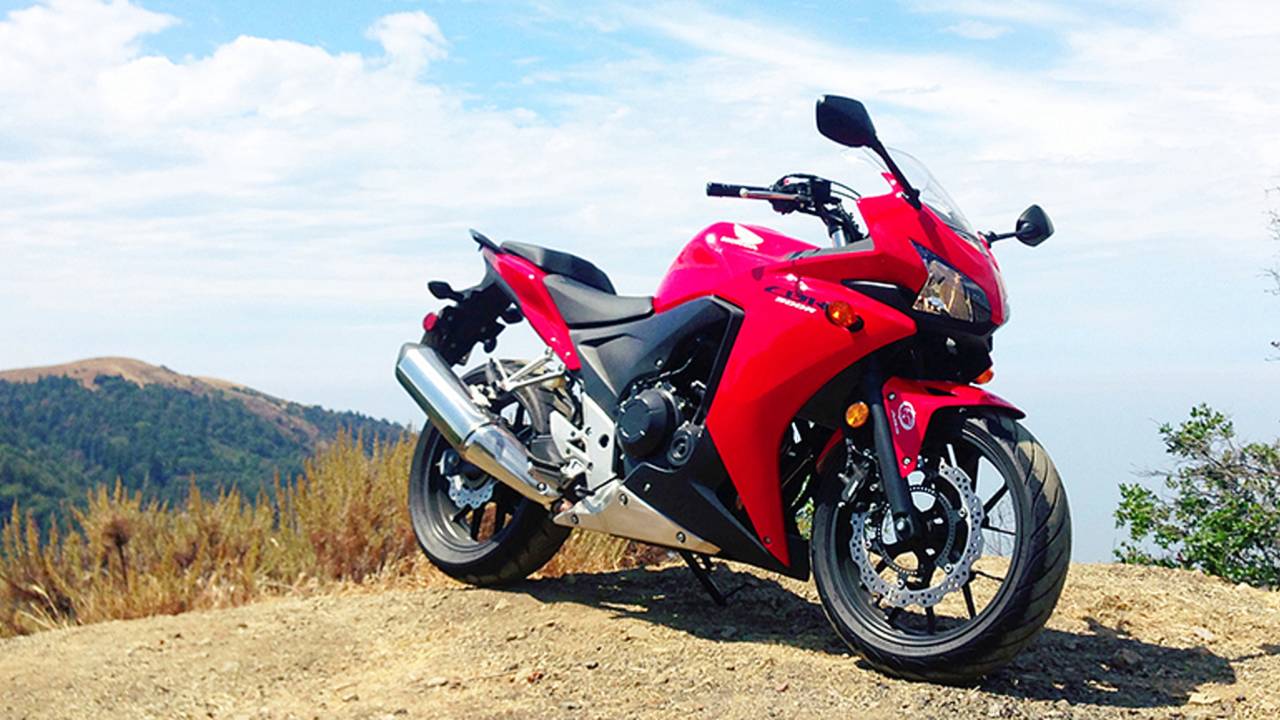 There’s a lot of things this new 2013 Honda CBR500R isn’t. It’s not very fast and it’s not very light. Riding it from Los Angeles to Laguna Seca to watch MotoGP this weekend, it didn’t draw a lot of admiring looks. But, it’s also very fuel-efficient, very cheap and very fun to ride. Is that enough to make you want one?

The CBR500R is an all-new motorcycle and the sportiest model in Honda’s new 500 range. It was made to meet Europe’s new A2 license tier for new riders, which specifies both a maximum power output (47bhp) and a power-to-weight ratio. It was also designed to be extremely affordable, both to buy and own.

It’s no coincidence then that the 471cc, liquid-cooled parallel-twin develops precisely 47bhp. That motor only revs to a relatively low redline of 8,500rpm, where it develops that peak power. Max torque of 32lb-ft arrives at 7,000rpm. On paper, that may not sound like the most flexible motor ever, but it’ll actually pull fairly strongly from 1,500rpm or so, all the way up to the limiter.

That engine is housed in a fairly basic, tubular steel frame, suspended by non-adjustable, 41mm, right-way up forks and a preload adjustable, Pro-Link monoshock.

So far, so humble. The kerb weight (including a full tank) isn’t particularly light, either, at 425lbs.

Aside from the ABS (a $500 option), there’s no new tech features or surprises. It’s a motorcycle, plain and simple. But a brilliant one. Why?

Every year since I moved to America in 2006, I’ve made riding from LA to Laguna Seca an annual ritual. Sure, the race is fun to watch and it’s a good place to catch up with old friends, but really, it’s just an excuse to take in some of the best riding roads in the world alongside a few buddies. Typically, I try and take something that fits a conventional idea of fun — an Aprilia RSV4 last year, a GSX-R1000 before that.

The route typically remains the same too. Cruise up to Ojai on the 33, take that to the 58. By the time that dumps you back out on the 101, we’re usually tired and hot, so we cruise up the 101 to Carmel Valley Road and arrive in Monterey exhausted and sore. But also satisfied, because those are three of the most scenic and challenging riding roads around. 33 is all high-speed sweepers, 58 is 2nd gear hairpins. Carmel Valley doesn’t have lane markers, but it does have bumps and blind corners; lots of them.

The Monday after the race, I like to head down the PCH through Big Sur, passing hoards of poorly-ridden sportsbikes while enjoying the view and, this year, headed over Nacimiento Fergusson road for the first time. That’s more single-lane hairpins, these covered in sand and loose rocks.

All in, it’s one of my favorite motorcycle trips of the year and a chance to let my hair down and go fast on fast bikes. Believe it or not, but I actually had more fun riding this little CBR than I have on any other bike yet.

33’s high speed sweepers should have proved a major challenge for a slow, basic bike. Climbing up the TopaTopa mountains, they’re typically one of the rare opportunities to use a liter bike’s full power on the road. Could 47bhp enough to make them fun? Well, that limited power output is complimented by fairly limited suspension, so it was fun. Full throttle, peg scraping, knee down fun, all at about half the speed I’d normally be travelling.

58? More of the same. Turning onto it, I’d hoped to hang with a group of fast guys on powerful sport tourers a Hayabusa and even an old Yamaha GTS1000, but they left me for dead on the road’s long, straight beginning. In 6th, the little Honda redlines at 102mph.

By the time I’d reached the corners, I was on my own and, again, spent most of the ride grabbing huge handfuls of throttle, then trying to take enough lean out in corners that hard parts wouldn’t drag. The CBR’s ground clearance is fairly limited, displaying a centimeter or so of unused rubber on both edges of the rear tire, even after removing the peg feelers, then dragging the pegs through almost every corner.

Stopping to grab knee down shots, a group on a 2013 Honda CBR600RR, Ducati 848 Evo and 900SS passed. The girl on the CBR was a friend who’d been asking about the 500, so I pulled on my helmet, hopped on my bike and chased all three of them down, passing each through subsequent corners. I was flat out with a huge smile on my face, they were a long, long, long ways from their bike’s limits.

And that difference — to and beyond the CBR500R’s full capability compared to maybe a third of the CBR600RR’s — is what makes riding the smaller, cheaper bike so much more fun. The 500 makes 71bhp less, the 500 is 15lbs heavier, the 500’s suspension is far less capable. But riding it on the street, that simply means you get to use full throttle, you get to use full lean, you get to ride the bike absolutely as hard as it will go, in safety, often while staying under the speed limit.

Then there’s the 500’s other benefits. All in, this trip totaled 780 miles. All in, I spent $46.18 on fuel, averaging 54mpg. That’s pretty good considering the type of riding described above.

Also unlike previous years, I also arrived in Monterey without any numb limbs and without back spasms. The little CBR is also the most comfortable CBR, with low pegs, a large, flat seat and a spacious cockpit. It’s also the only CBR with enough space for large luggage.

Yesterday’s ride back down Big Sur wasn’t the flat-out, high speed blast it’s been in previous years. It was cold and foggy, so we just cruised along at a reasonable pace. The CBR’s upright riding position afforded excellent views and it remained calm and confident, even in sketchy conditions. Turning up through Nacimiento Fergusson, the extreme agility created by the narrow, 160/60-17 rear tire made the tight road and limited traction easy, too. A larger, faster bike would have been ponderous there.

But perhaps the best illustration of the diverse capability of the CBR500R came at the very end of the trip. A tractor trailer had flipped on the 101 near Topanga Canyon Blvd, blocking all four lanes and halting traffic completely. Even after riding all the way back from Monterey, I was sharp and mentally acute enough to navigate 20 miles or more of totally stalled freeway traffic with the same ease as I’d had anywhere else on the trip. The CBR500R is as good in tight traffic as it is dragging knee as it is cruising down the highway.

And it would have been just as easy and fun in any of those places or on the entire trip for a new rider as it was for me. Taking that into account, this is the most diversely capable, fun bike that Honda makes.

Flexible, responsive motor. The top speed is governed by gearing, not a limiter, so it pulls strongly up to 100mph.

The ABS brakes are so unobtrusive, you won’t know they’re there until you come to a sharp, confident halt in bad conditions. They remain sensitive enough to trail to an apex, with your knee on the ground.

Heavy on paper, but you’ll swear it weighs 75lbs less as soon as you swing a leg over it; that weight is totally hidden.

Very confidence inspiring, encouraging you to push as hard as possible.

Looks like a much more expensive bike than it is.

Powerful highbeam works well at night on back roads.

A helmet lock positioned so your helmet rests upright, on the center of the rider seat.

A taller screen will add comfort on long journeys.

Preload collar impossible to reach without specialized tool (not included).

This is an exceptionally affordable motorcycle, something aided by the 71mpg fuel economy rating; you can basically drop fuel bills from your budget.

What do you want out of this whole motorcycle riding thing? Bragging rights? Flashy graphics and fancy components? Speeding tickets? A literal pain in the butt? Instead of that, what about a bike that’s insanely good fun at legal speeds? One that’s all-day comfortable, one that you can afford to buy and afford to run? One that’s as good in traffic as it is on a mountain road?

And here’s the thing about motorcycle riding: it’s a sport, not a purchase. It’s something you have to work hard at getting good at. The CBR500R is the perfect tool to develop the skills that you’ll need to ride something faster. It’ll help you learn about brakes, handling and power, all while providing you with a comfortable, confident, practical, economical form of transportation.

But as my trip proves, it’s not just n00bs who’ll find something to love in the CBR500R. Experienced riders will appreciate the cost and the fuel economy, of course, but will be surprised by the handling and performance and fun, too. It’d make a great commuter or just a great economical all-rounder for when the fancy bike needs to stay in the garage.

The CBR500R isn't the fastest bike out there, it isn't the sharpest and it's probably not the sexiest. What it is is one of the most accessible, friendliest, practical, most fun motorcycles you've ever been able to buy.

RideApart Rating: 10/10 (the buyer’s guide will update to reflect this shortly)