This 2015 Mercedes-Benz GLA 45 is a sport, all-wheel-drive, turbo wagon and we can't get enough of it. Read our latest trip and review.

You’ll likely see a fair number of stories talking about the hoontastic fun one can have in Mercedes-Benz’ latest steroid-injected crossover, the GLA 45. This, sadly, isn’t one of them.

It’s not for a lack of desire to push this 355-horsepower hatchback-crossover thingy (we don't know what else to call it) to its limits. The Mercedes-Benz GLA 45 has everything this writer could want: big, turbocharged power; all-wheel drive; and more wings than the first Fast and Furious movie.

READ MORE: 5 Cars That Wish They Were Motorcycles

The problem is that I’ve been cursed with the uncanny ability to always find myself behind the slowest vehicle possible, and in this case, it’s a somewhat old, teal-ish Chevy Silverado, with a rack in the bed and a gaggle of kids in the back seat, calmly trudging along at 10 mph under the speed limit, blithely ignoring any and all turnouts. 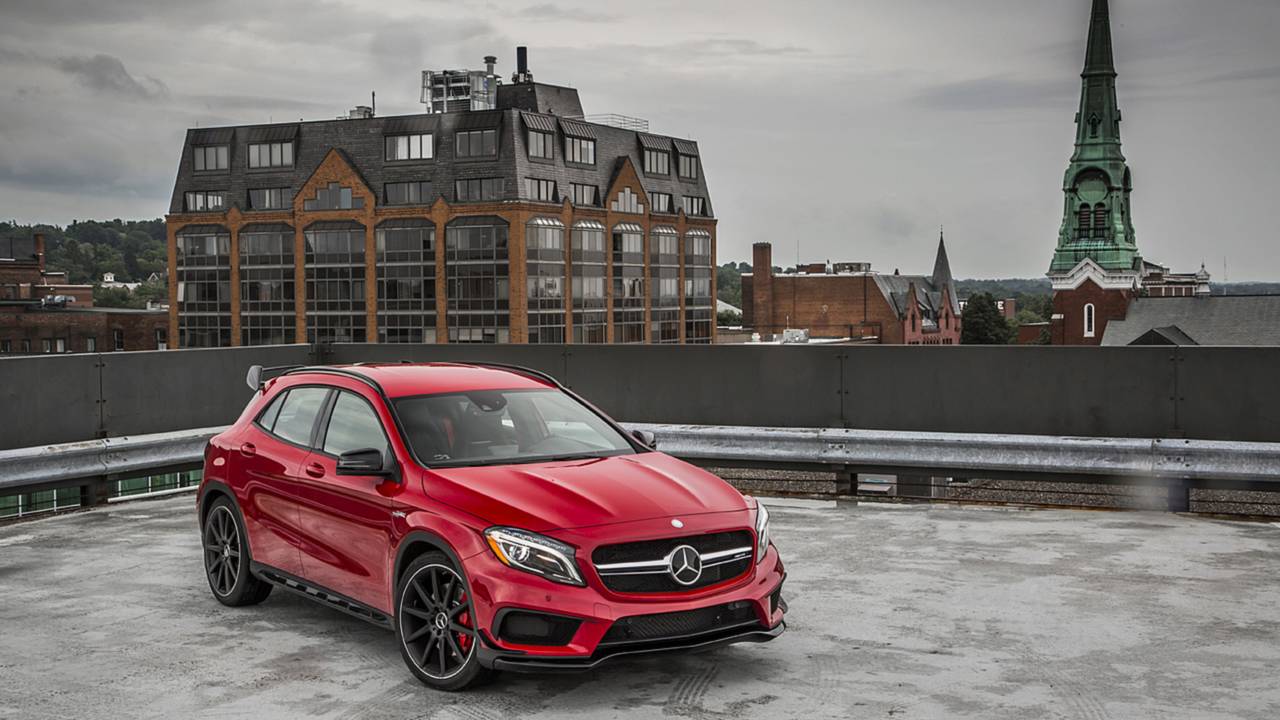 Some of you are likely shouting, “why don’t you just pass?” at your monitors right about now. Well, I’d love to, but there are no clear passing zones, and the road is full of blind corners. The last time I got fed up enough to pass someone under these conditions, I found myself speeding head-first at an oncoming motorcyclist, and that’s an experience I’d prefer not to repeat.

So while other journos are tearing down this same road, exploring how the specially tuned 4MATIC system sends up to half the 332 lb-ft of torque to the back wheels, I’m left to ponder what makes this vehicle special.

It’s kind of a confusing vehicle, this GLA 45. On one hand, it does signal the future of Mercedes-Benz, with the standard GLA 250 projected to the brand’s sales leader, and by a very large margin. Which means with a starting price under $70,000, this hopped-up version will just as likely become the de facto face of AMG.

From an engineering standpoint, this GLA 45 does its AMG badge proud. Its 2.0-liter 4-cylinder turbocharged engine adheres to AMG’s “one man, one engine” mantra, and according to M-B’s engineers, is basically the AMG GT’s V8 cut in half. It’s built by hand and features an air-to-water intercooler, forged internals and produces all of its 332 lb-ft of torque from 2,250 to 5,000 rpm. It still gets a combined 25 mpg, and thanks to that AMG-tuned AWD wizardry, can run from 0-60 in just 4.8 seconds. 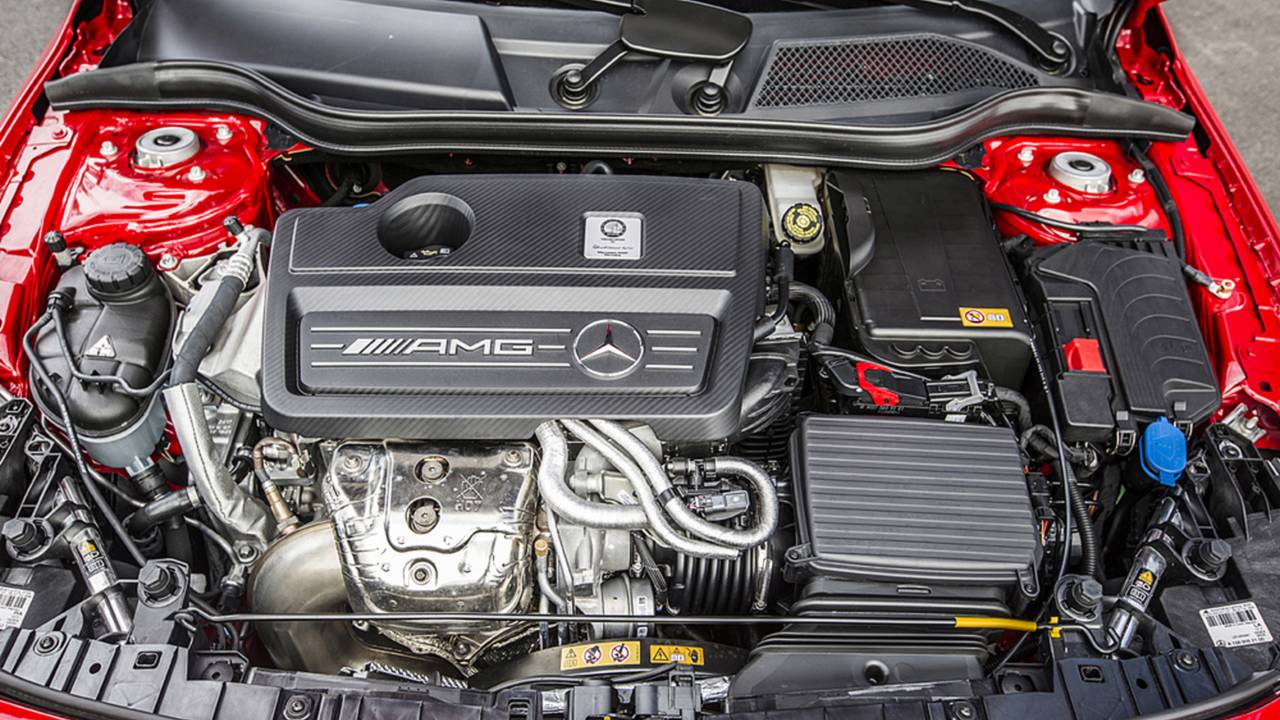 Visually, this is probably the wildest AMG yet – it looks like something out of a tuner magazine versus the “brawler in a tuxedo” look of the higher-end AMG machines. All performance-minded surfaces are finished in a stark, contrasting black, and ride height has been dropped to the point of wheel tuck. Wheels are appropriately oversized and help show off the bright red brake calipers. The optional rear wing – which I unashamedly love – looks like it was ripped off of a Subaru STI.

The cabin is appropriately sporty, with snug, aggressively bolstered sports seats; an Alcantra-clad, flat-bottomed steering wheel; red stitching everywhere; and carbon fiber trim. While these all add an element of excitement compared to the standard GLA cabin, after a few hours of leisurely cruising, the two cabins don’t feel wildly different. Both versions feature a sizable cargo area and fold-flat rear seats, there’s still plenty of room to carry your stuff – whatever it may be. 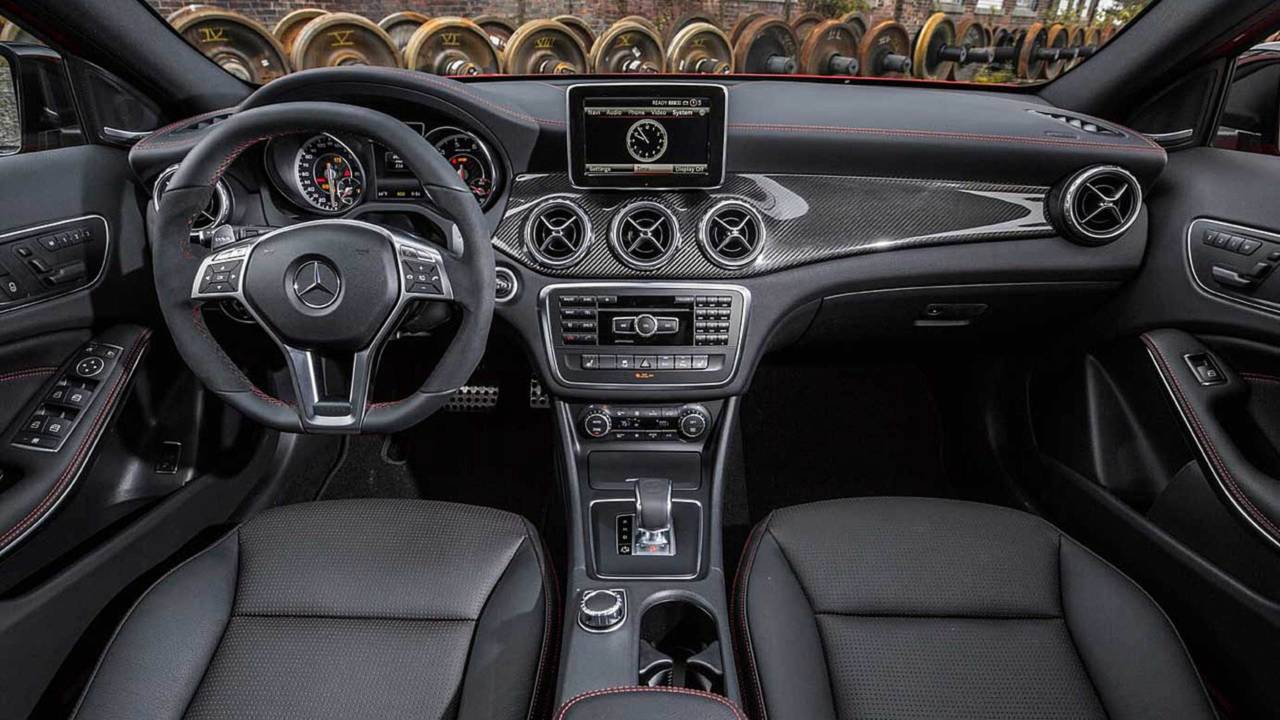 With the rear seats down, you have 54.9 cubic feet of cargo area. Keeping them up reduces the space to a still-useful 31.8. Granted, that’s a fair bit less than other CUVs, but it’s still enough to haul camping gear, snowboard clothes or tools for tuning your mountain bike. If you want to haul anything larger, though, you’ll need to spring for a proper roof rack. And even with the different seat trim, the AMG is still just as practical as the 250.

And that's where my confusion regarding the AMG lies. In the big, V8-powered cars, you always feel like you’re driving something extra special. Even the E63 wagon seems to always feel like a kid-hauling sledgehammer. But here, at normal speeds, there’s not a whole lot to differentiate this ride from the normal GLA. It’s kind of a detached experience and lacks a communicative, pure sense of fun.

Both cars offer a comfortable, if slightly stiff ride. Steering feedback is good, but not immediate. And with only four cylinders, there’s no audible bark to speak of. The standard GLA itself has some excellent brakes and a 7.1-second 0-60 time, so at these speeds, the AMG doesn’t feel that much faster – not fast enough to justify the $30K premium, but that's not really the point of the AMG. The point is it's an AMG and it's more awesome than the awesomeness of a non-AMG model. You can't argue with logic now, can you? 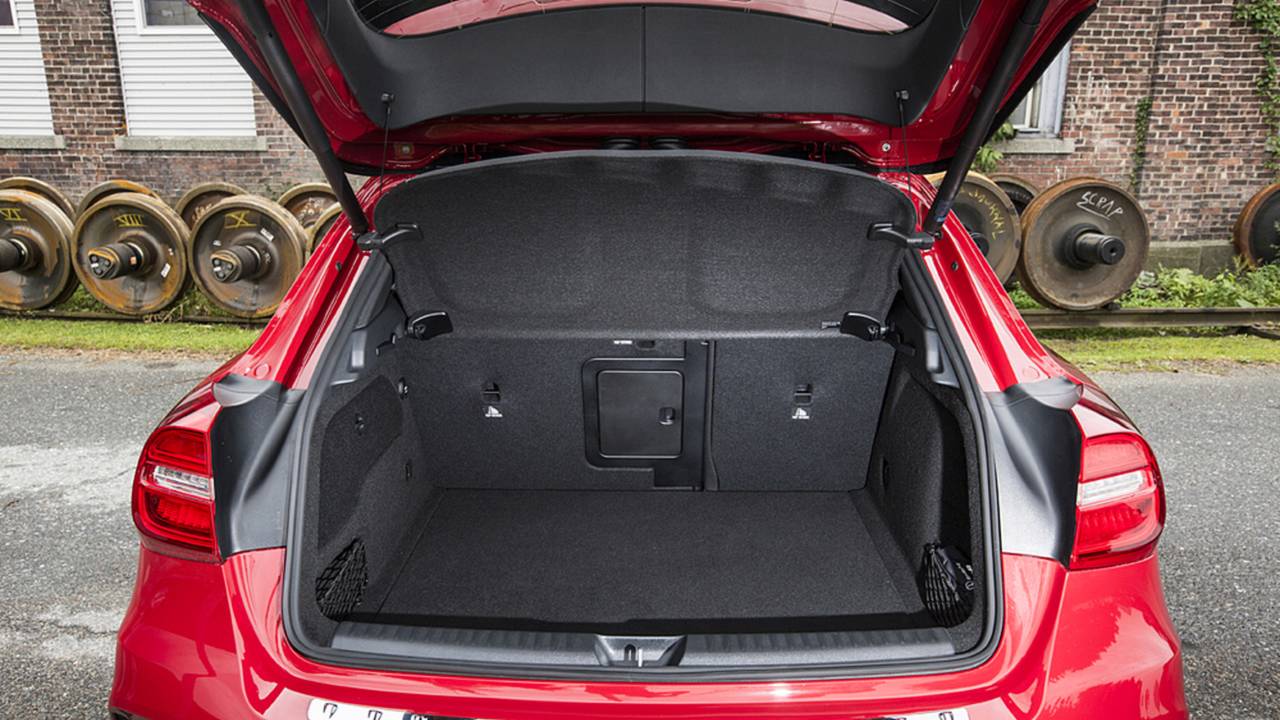 And just as I start to wish I stuck with the standard GLA 250, that Sliverado finally turns off onto a side street, the road opens up, the turbo hits full boost and the GLA 45 gets its chance to shine. Acceleration is instant – basically a full-force kick to the head. My peripheral vision becomes a blur and it’s all I can do to focus on the road ahead.

Only light braking is needed for corners as the AMG 3-stage ESP torque-vectoring system does an amazing job of keeping me on my line. And when I do need to brake, the massive discs bite instantly, causing my eyes to bulge slightly out of their sockets, relief only coming when I push them back into place with another stab of the throttle. And the popping that occurs on overrun is such a treat, I can’t help but open the GLA up any chance I get.

But then I hit a stop sign and, out of nowhere, that same teal Silverado comes back and places itself right in front of me. I guess he took a short cut while I took the long way around. And now I’m back to driving 10 under the limit, desperately searching for any opening, and wishing I wasn’t born with this curse. 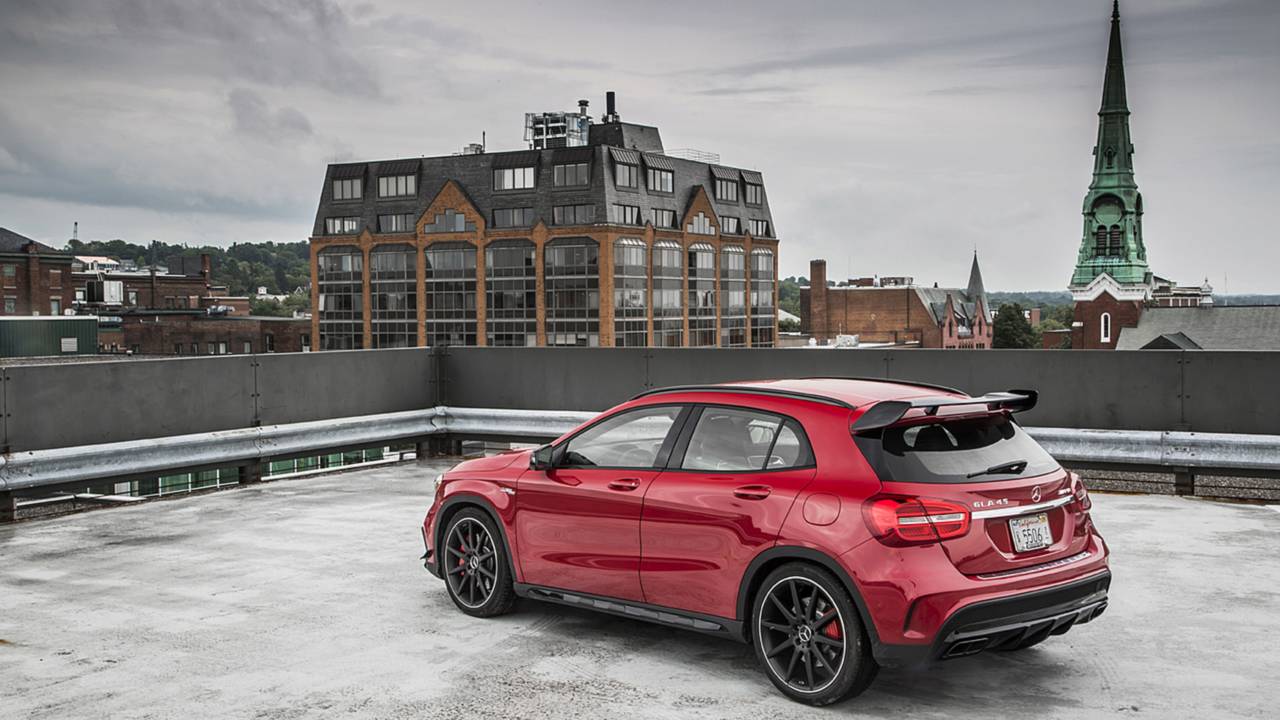 By: Justin Kaehler
++
++
Got a tip for us? Email: tips@rideapart.com