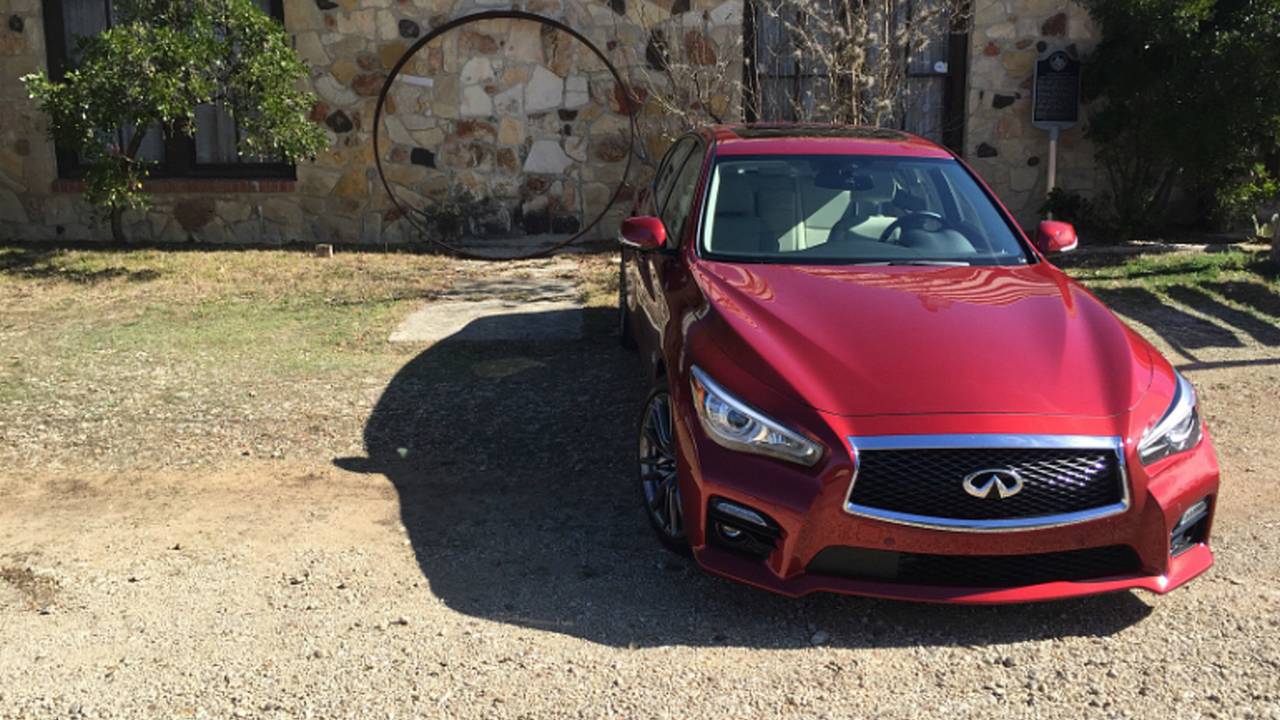 The entry-level luxury sports sedan arguably makes up the most competitive segment in the industry today. With contenders such as the BMW 340i, the Mercedes-AMG C43, and the Audi S4, the bar is constantly set even higher with every update. To improve performance and reduce emissions, the Germans have all downsized their engines and adopted some form of forced induction. In a major update to its Q50 sports sedan, Infiniti has finally followed suit, replacing its vaunted-but-aging 3.7-liter V6 with a smaller and lighter turbocharged V6 that comes in two flavors. The more powerful of the two, dubbed the Q50 Red Sport 400, has entered the fray with a new weapon: 400 fire-breathing horsepower.

The Red Sport 400's all-new 3.0-liter twin-turbo V6 is Infiniti's most impressive engine to date. In development, Infiniti's engineers placed a lot of focus on mitigating turbo lag, implementing technologies such as an integrated exhaust manifold and water cooled air-charging to improve engine response. Rated at a best-in-class 400 horsepower, maximum power output in the new Q50 is, of course, significantly greater than the 328 horsepower put out by the old 3.7. Without a doubt, the new Q50 is stupendously quick. But what stood out while driving was the new engine's highly elastic power band. While the old 3.7 produced a not-insignificant 269 lb-ft of torque, you needed to rev the engine to a lofty 5200 rpm to reach it. Meanwhile, the new turbo'd Q50 can produce its peak torque of 350 lb-ft. from 1600 rpm-5200 rpm, meaning that there's ample power available at all times.

The new Q50 truly has a multitude of personalities, and you can choose what suits you based on what you're in the mood for. Thanks to the Red Sport's Drive Mode Selector, a noticeable change in the car's temperament can come with the turn of a knob on the center console.

You can choose from five pre-programmed settings, or create your own personal combination of preferred steering, suspension, traction control, and engine settings. In Comfort mode, the Q50 is content playing the role of smooth operator, reminding us that it's still a luxury car. Turn the knob to Sport +, which selects the angriest of all settings, and the Q50 becomes your own personal smile generator. Sport + does not fully deactivate traction control, something that purists will likely complain about. But for most drivers, Sport + is enough to have fun and play with the back end without fear of losing control, which can easily occur due to the prodigious amount of power going to the rear wheels.

Although the new engine is an incredible improvement over the award-winning 3.7, the greatest surprise of our drive with the Red Sport 400 was Infiniti's updated Direct Adaptive Steering (DAS) system. DAS is an industry-first steer-by-wire system, meaning that drive inputs to the steering wheel are completely electronic. The optional system made its debut on the Q50 in 2014, and was widely criticized for an artificial feel.

Infiniti's engineers worked tirelessly to imbue a more natural feel, and the end result is spectacular. We had the chance to sample cars equipped with the standard electric power steering system to compare the two setups, and while the standard system is decent, it's overshadowed by the DAS system. The DAS system is more precise, has a sportier, more direct feel, and translates far less road vibration to your hands. On our test, which featured everything from empty country roads with high-speed sweepers to a tight autocross track, DAS and the Q50's willing chassis showcased the breadth of their versatility, performing well in every setting.

The new updates to the Q50 are primarily mechanical, so exterior and interior changes are minimal. The Red Sport 400 gets new 19-inch wheels that look especially premium, along with exclusive staggered-width tires and unique exhaust tips. Otherwise, it's standard Q50 all around, which isn't necessarily a bad thing, because the Q50 has always looked and felt luxurious both inside and out.

The new Q50 features Infiniti's full suite of Driver's Assist systems, some of which are useful and convenient, others of which can be quite intrusive, such as the lane departure prevention system, which is too sensitive to detect lane drifting and will abruptly apply the brakes, occasionally causing an unwanted jolt.

Although pricing has not yet been announced, we expect the Q50 Red Sport 400 to be competitive with similar cars in the segment. If this is true, the Q50 makes a very compelling value proposition. With the newly turbocharged engine and updated DAS system, Infiniti has addressed the shortcomings of a fantastic platform that was already brimming with style, luxury, and technology. The new Q50 is finally a complete package, and a seriously dangerous contender in its segment.