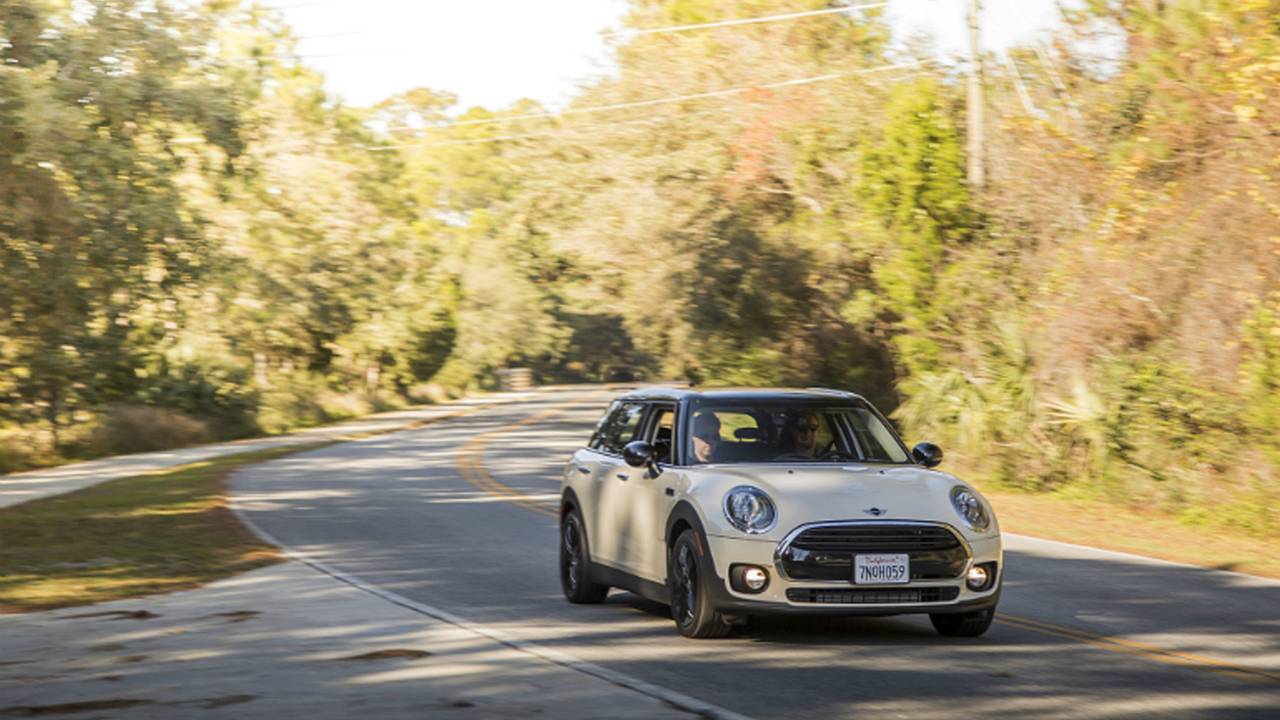 The 2016 Mini Cooper Clubman boasts a smooth ride and sleeker features than we're used to seeing from Mini. But is it a new staple, or merely a placeholder?

Heritage. Heritage. Heritage. That was the name of the game for the 2016 Mini Cooper Clubman First Drive in Savannah, Georgia. And, considering the brand, heritage is never a bad point of emphasis, but in whose heritage did the collected automotive reporteratti skirt the southern swamps? And was said skirting done in a new tent pole vehicle for the millennially-resurgent British brand’s line-up?

Well, on the outside at least, this is still unmistakably a Mini Cooper. Given the aforementioned emphasis placed on “heritage” throughout the presentations, the 2016 Clubman adheres pretty strictly to what the casual eye would consider classic Mini characteristics.

The ovular body, slab top, and bulbous side mirrors remain immediately apparent, if slightly streamlined. And that’s the main takeaway: this is not quite the bouncing, remarkably quirky subcompact alternative we’re used to, but like, it basically is.

1) The taillights, longtime adherents to the vertical life, have been tipped horizontal. For the more Mini-manic attendees this was a big deal…maybe it is to you too.

2) You’ll now be fueling up on the right side. Again, the heads may fret, but will in all likelihood be fine. Everyone is usually just fine.

Of course I'd be remiss to omit the classic "barn" doors' presence. Don't worry, gang, they're there. More on those in a minute though...

Spacious. Shockingly spacious. In my experience (essentially limited to a 36-hour haul from Chicago to LA, a 20-hour dash down from Seattle to LA, and scattered city-bound trips following that), Mini isn't always give-y with the elbow and trunk space.

This time around, I had no problem throwing a few 'bows and, had we needed it, the trunk's 47.9 cubic ft. (rear seats not in use) would seem downright cavernous considering what we're dealing with.

The rear seats themselves, as the Mini Cooper design reps informed us, were inspired by the classic Chesterfield couch. To the untrained eye they may look like fairly ordinary rear seats, but hark, dear reader, they're apparently so much more than that.

Tuck that factoid away, nothing impresses chicks/dudes/anyone to whom you'll ever show off your backseat like semi-specific couch design banter.

And, finally, the front seats. I'll admit, southern hospitality had me slightly bleary that morning, so my driving partner took the first leg. His first reaction (beyond a look of concern/deserved condescension) was that the driver's seat was sat atop, rather than in. I nodded and pretended to pour over the specs. That being said, my unimpeachable professionalism came roaring back in the afternoon and my guy was spot on; it was a definite perch, not a lounge. He had mixed feelings about it, but, in keeping with a theory I was developing about the 2016 Clubman, I was thoroughly on-board.

And, if that uninspired stat doesn't give you even moderately serious pause, here's another. Vis-i-bil-i-ty, baby: it wasn’t there. The Clubman’s spacious interior and aesthetically sleeked-out body fail to match perhaps the most important visual of all.

My issues with the Clubman’s visibility are these:

1) The curvature of the back windshield doesn’t line up with that of the rearview mirror. It’s not only distracting because your field of vision appears even smaller than it actually is, but also because you find your eyes drawn to the frame of the windshield rather than what’s beyond it.

2) Speaking of which, the frame seems excessively thick. I understand that the barn doors (told you I had more on those!) require some sort of central divider, but I’m at a loss as to why said divider is so large. While shaving off a few millimeters on either side might change the aesthetics juuuu-uuuu-uuuuuu-uuuuust a bit, it would open up the back view significantly. That’s, you know, pretty important when you’re, like, driving.

3) Because the Clubman retains a similar height to its millennial predecessors, the rear seats (another callback, 'member? From before!), filled by anyone over 5’6 (give or preferably take an inch), would obstruct the rearview even further, if not almost entirely.

So there's that... Probably (hopefully!) correctable, but an issue all the same.

Okay, time to top off this compliment sandwich.

Oh, it's smooth. And quiet. Lord, is it quiet. Going anywhere between 60-90mph on the highway, windows rolled down, the volume of conversation was, well, conversational. Granted, once the windows gave in to the almighty buffet, at various other angles, the effect was as expected, i.e. we got loud in the Coop. The point remains, however, that natural ventilation and chitchat are not mutually exclusive here. That's pretty cool, and padded my now nearly, dare I say, robust theory even further. This theory, you guys. Oh, man.

Georgia's swamp perimeter has its fair share of windiness. And, being the sporty little number it appeared, we expected the Clubman to snake its way through with ease. Not so much. The wheels slid out just enough for discomfort on tighter curves. Gravel was handled with an equally-awkward gate. The disc and disc ventilated rear and front brakes, respectively, also took a little getting used to. Not a deal-breaker or true hazard by any stretch, but something to keep in mind behind the wheel.

Inline 3-cylinder with TwinPower Turbo technology, turbocharged and direct injected. This baby has a little zip to it and, depending on your preference (or in my case competence/lack thereof), the 6-speed manual and 8-speed automatic both welled-up with a satisfying kick underneath both passenger and driver. It should be noted that those speeds, and this review in general, are for the "Cooper S" model. The just plain "Cooper" model features a 6-speed automatic option, but, unfortunately, I was unable to get into one during the test day.

I suppose this is an appropriate time to discuss the much-ballyhooed trio of modes. "Sport," "Mid" and "Green." As you might expect, Sport is the one where you really feel revved up and ready to go, Mid is the standard setting and Green is ostensibly more fuel efficient.

1) Sport certainly sounded the part, especially accelerating into it, and that was neat, but failed to produce the RPM-spike to match...I'll leave it at that. Other reviews may use stronger, more targeted language.

2) Mid mode, well, I mean, it was fine. No complaints. Not too bad. We all drive along happy, if not particularly rah rah about it.

3) Green mode was a little confusing. We weren't really on the road long enough to gauge the actual efficacy of this supposed improvement in fuel economy, but we did notice one little quirk. When we stopped the car in Green Mode (without parking mind you) it shut the engine off until the brake was released. Or something like that, it was oddly difficult to replicate. I guess that's a point for the about-town-under-threat-of-having-to-idle crowd.

I think the 2016 Mini Cooper Clubman would be a better road-tripping car than anything else. Exciting stuff, right??

But road-trips aren't all that frequent for most of us, so here's the deal. The 2016 Clubman has a smooth ride, heritage-conscious compact size, a heritage-conscious but tweaked slightly sleeker design, and its flaws are more obnoxious than fatal. I wouldn't be surprised if, heritage aside, the 2016 Clubman marks another transitional moment for Mini; a step further into the realm of the sports car and, naturally, its parent company.

For me, its not necessarily the right vibe, but then again, I drive a 2000 Volkswagen Beetle because my needs and car budget are pedestrian at best, so to speak. Shout to Courtney Barnett.

The Clubman should be in US dealerships this month.