Is Indian Prepping Another PowerPlus-Powered Bagger For Launch?

In pursuit of bagger dominance.

When Indian Motorcycle released the Challenger in October, 2019, it quickly made an impression in the big-bore bagger market. Touting the brand’s new liquid-cooled, DOHC, eight-valve, 108 cubic-inch (1,768cc) PowerPlus engine that produces 122 horsepower, the new bagger on the block was ready to make waves in the American V-twin market.

After proving its mettle in the King of the Baggers Invitational, the Challenger remains a fixture in Indian’s lineup, but it won’t be the only PowerPlus model for long. Back in 2020, Indian filed a trademark application for the Pursuit name. While information was scant at the time, U.S. National Highway Traffic Safety Administration (NHTSA) Vehicle Identification Number documents reveal that the Pursuit will indeed harness the brand’s latest powerplant.

Joining the Challenger Elite and Challenger Jack Daniel’s Edition in 2022, the new Pursuit model will come in two different flavors. Based on Indian naming conventions, we expect the Pursuit Dark Horse as the standard model while the Pursuit Limited throws the kit and caboodle at the platform’s touring ambitions.

In addition to the NHTSA documentation, patent drawings also divulge several Pursuit design elements. Unlike the Challenger, which features a frame-mounted fairing, the upcoming bagger will boast a fork-mounted fairing. The instrumentation also resembles the equipment found on the Chieftain and Roadmaster while the tall windscreen defies comparisons. The drawings do depict lower leg fairings up front, but there are curiously no bags mounted out back.

Of course, we fully expect panniers on the Pursuit once Indian launches the new liquid-cooled bagger, but the firm is withholding those designs for now. When the Pursuit does hit the market, we anticipate it going head-to-head with fellow fork-mounted fairing models such as Harley-Davidson's Street Glide and BMW’s R 18 B. The Chieftain may be Indian’s resident model in the category, but it looks like they’re in pursuit of even more performance with the new bagger.

Battle Of The Baggers: 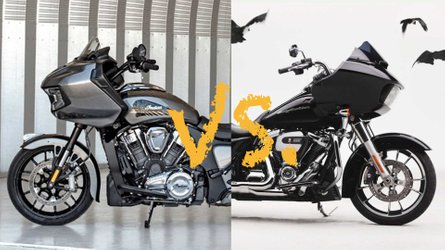 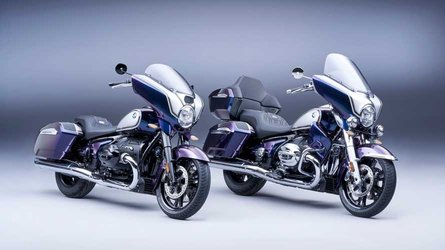