Nothing's standard on this standard.

A Universal Japanese Motorcycle (UJM) is as basic as they come, and a dream for customizers to make into anything they want to. That being said, MR Martini's custom ZRX1100 is a absolute looker of a "lightly-modified" custom bike.

The base bike used in this project is a 2001 Kawasaki ZRX1100. The model was produced from 1997 all the way until 2001. It produced 96 horsepower from its 1,052 cc inline-four-cylinder engine with a healthy 69.3 lb-ft of torque, and it had a top speed of about 140 miles per hour. The bike will also run the quarter mile in about 11 seconds. Its zero to 60 time can even compete with modern machines at 2.9 seconds.

Now back to the bike. Martini says that it's a "soft special," which means that the build is quite restricted—at least in comparison to his other projects. Those familiar with Martini's work will note that the Kawasaki isn't that custom. It still retains most of the bodylines of the stock ZRX1100, especially from the tank to the tail section of the bike.

The paintwork is absolutely sublime. The metallic teal harks back to the era that this bike was from, and the brown accent adds a bit of that café flavor. One of my favorite details would have to be the painted Kawasaki branding on the tank. It's by no means a standard logo, but the font reminds us of the original Kawasaki logo that first appeared in 1961—even the rear shock's KYB logo is period-correct. Other than that, the bike has been thoroughly detailed and cleaned to give it a factory-fresh vibe. The engine and running gear have all been detailed, and MR Martini also slapped on some modern Metzeler Roadtec 01 tires to pin all those horses to the ground.

While a good serving of elbow grease and paint looked like the main ingredients, what ties the bike together is the striking offset headlight, which happens to be an LED lamp, that sits outside its custom cowl.

If you like what you see, the bike is currently for sale, and interested buyers can get in touch with him on his website, but like most customs this particular bike could've caught someone else's eye already. Act fast while you can. 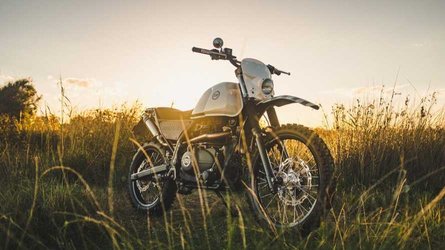 This Custom Royal Enfield Himalayan Is A Classic Enduro Dream 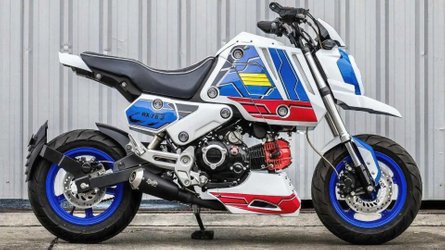