Vmoto’s Super Soco brand has finally set a date to unveil its 2021 bikes. The electric scooter and manufacturer teased the TC Wanderer and Street Hunter earlier this year and the brand will officially reveal its lineup on February 23, 2021. The Vmoto Soco YouTube channel and social media accounts will live stream the event at 14:00 CET (8:00 am EST).

The Vmoto Soco World Première will include three new motorcycles along with a futuristic concept and an un-named MotoGP champion (oh, the suspense) will help announce the new electrics. While the Chinese electric mobility brand currently offers four electric motorcycles with the TC, TC MAX, TS, and TSX, we fully expect the new “models” to be additional trims of existing platforms. 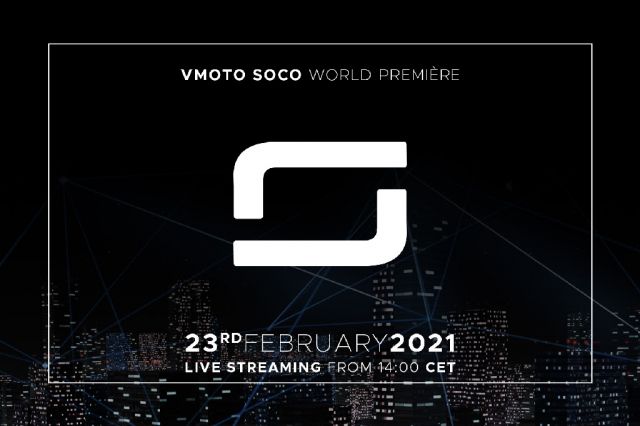 The company already released a teaser for the TS Street Hunter in mid-January. The video cast the naked electric as a city-bound commuter with edge. Taking more than a few cues from Yamaha’s Darkside of Japan campaign, the upcoming Street Hunter should appeal to those that want a little grit in an electric motorcycle.

On the other hand, the Wanderer will fall under the brand’s TC banner and adopt the scrambler aesthetic. Unlike the highly-digital TS Street Hunter teaser, the TC Wanderer video revealed a few more details about the upcoming bike. The circular headlight contrasts with the transformer designer of the Street Hunter and the flat saddle communicates a much more relaxed ride aboard the retro-styled electric.

Though the TS and TC variants differ in looks, the technical underpinnings of both are very similar. The two merely wear different skins, but boast the same range, top speed, and electric powerplant. Despite what we know of the TC Wanderer and TS Street Hunter, Vmoto hasn’t supplied any clues of the final two pieces of the puzzle. I guess we’ll have to tune in on Tuesday for the payoff we’ve been waiting for since December 2020.