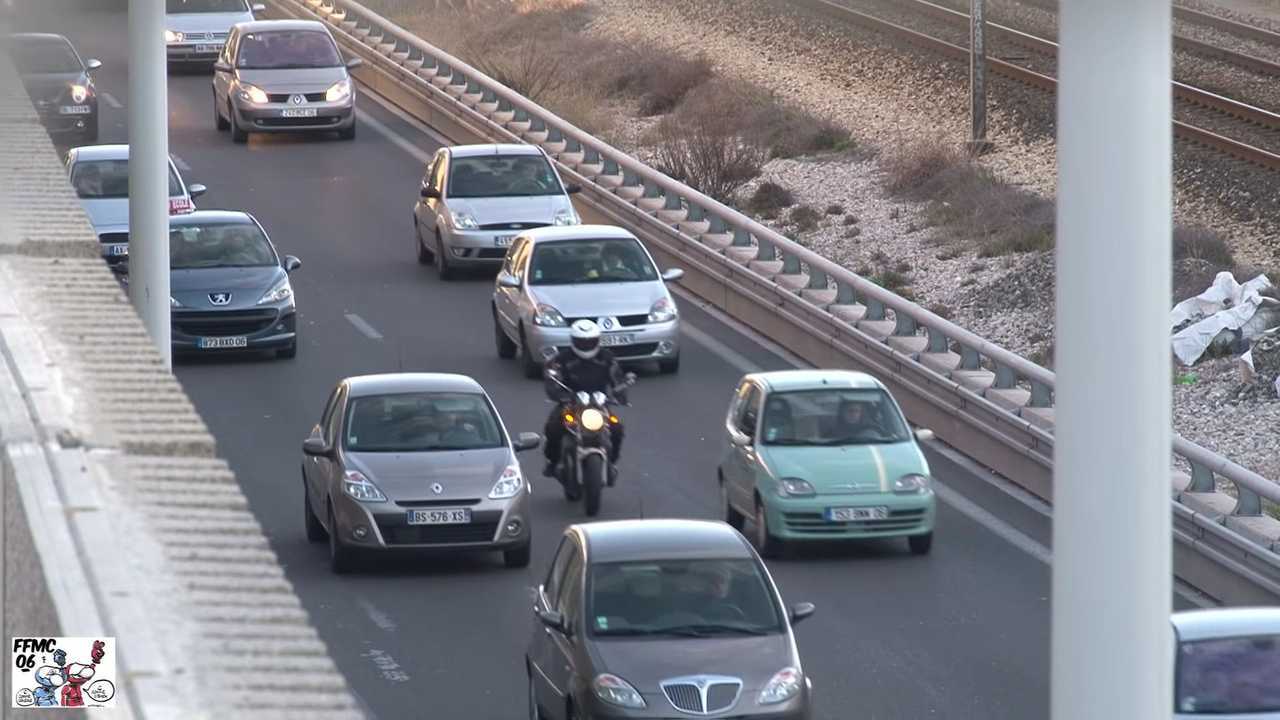 Lane splitting is a pretty hot topic of debate for motorcyclists. Many are in favor of the practice and will say that it helps to alleviate traffic congestion. That it, in turn, ends up helping all road traffic, not just bikes. Drivers, on the other hand, are more likely to express strong reservations about being forced to put down their phones while driving a practice they perceive as more unpredictable, and therefore more dangerous.

Anecdotes are one thing, and data is another. It’s worth noting, though, that anecdotes can point you in the general direction of where you need to go mining that data, which can often be useful. Thus, where it seems we find ourselves with the January, 2021, results of a French lane-splitting experiment.

The biggest takeaway that most people seem to be citing is the observation that crashes increased by 12 percent on roads that took part in the experiment, while they decreased by 10 percent elsewhere. However, as is often the case, we need to dive a little deeper to get a clearer picture of what’s going on.

CEREMA, short for the Center for Studies and Expertise on Risks, Environment, Mobility, and Planning (only in French, of course), assessed the results of this five-year experiment. Lane-splitting in France, as the law currently stands, isn’t actually regulated. Riders do it frequently, but it’s neither explicitly sanctioned, nor encouraged.

The experiment began on February 1, 2016. France divides its governmental administration into three sub-levels: administrative regions, departments, and communes. To give you a better idea of scale, overall, the nation consists of 96 departments, with an additional five located overseas. Just ten departments participated in this experiment, with one additional department observed as a control.

Researchers observed traffic at various times, and also kept track of crashes involving two-wheelers that occurred within the specified time frame. Additionally, the team surveyed riders, drivers, and also riding and driving instructors regarding various facets of this experiment.

In the experimental zones, riders of two-wheeled vehicles (as well as three-wheelers that aren’t too wide—Piaggio MP3s would be OK, but a bike with a sidecar wouldn’t) could lane-split when traffic was traveling at speeds at or below 50 kph (or 31 mph). This behavior could involve filtering up to the front of the line in stopped traffic, or riding single-file between lines of cars moving at low speeds.

While the experiment was going on, driving and riding instructors were informed that it was happening.  However, they weren’t explicitly told either to tell or to not tell their students about it. The result was that some road users knew it was happening, and some didn’t. In cases where instructors may have told students about it, there was no hands-on training given for how to approach a lane-splitting situation. Instead, videos, photos, and other visual aids were the only tools used. When asked about it later, even students who’d received that briefest of overviews mostly said they didn’t remember it.

Additionally, when you factor in the results of rider and driver surveys that the French research team received back, you see one extremely familiar attitude emerge. Two thirds of car drivers, according to the survey, don’t think that lane-splitting safety is their problem. Instead, they say, it’s up to riders of two-wheeled vehicles to make things safe on their own. Sorry, but that sounds a bit like telling someone who was seriously injured by a drunk driver that they (the person injured) should have just looked where they were going. As I’m sure you’ve noticed, public roads simply don’t work like that.

Inconsistent knowledge of the experiment and a lack of training for riders or drivers are definite factors in CEREMA’s findings. While the team found these results disappointing, they’ve decided that more research is needed to gain a more accurate picture of how to make things safer for all road users.

“The aim of this experiment was to reduce the accidents of motorized two-wheelers by framing the practice of lane splitting in the departments concerned,”  Interministerial Delegate for Road Safety Marie Gautier-Melleray said in a statement.

“However, the result is not up to our expectations, since the ratio of accidents on the experiment’s networks compared to other networks has increased significantly in one zone and is increasing slightly elsewhere. A new experiment, with appropriate rules, could therefore be envisaged in order to ensure the safe continuation of this practice.”

A statement from the Federation of European Motorcyclists’ Associations follows up Gautier-Melleray's statement with, “A second, more in-depth experiment should include the widening of the geographical areas concerned, new traffic rules, an automated data collection methodology, adapted and continuous communication to perfect the education of all road users on the subject.”

We’ll have to see how this all pans out, but gathering more data can only be useful for riders, both in France and likely elsewhere.