Spotted: 2021 KTM 1290 Super Adventure Bulked Up Over The Summer

There's a raft of changes hiding under all that cladding.

Friends, the wait is over: if you’ve been plagued by incessant thoughts about the 2021 KTM 1290 Super Adventure, these spy shots are your first glimpse at what’s coming. As you’d expect, Euro 5 emissions compliance was front and center on the KTM team’s minds, but it was definitely not the only ingredient they threw into the pot.

Our good pal Secret Squirrel tells us that all that new body cladding isn’t there because the 1290 Super Adventure got cold. Instead, it’s there for two reasons: to offer better wind protection to riders, and also to shield the center-of-gravity-lowering split fuel tank situation this revamped version now has—similar to the solution found on the 790 Adventure. It also shields larger, more efficient split radiators—an integral part of KTM’s answer to providing a piston engine with the cleaner combustion that Euro 5 requires.

No amount of shielding can hide that extra chunky muffler, and KTM wisely didn’t try. It’s here, it’s massive, and we’d better get used to it. There’s also a more massive swingarm, as well as a new cast aluminum rear frame to get to grips with. You know what? We don’t know how it sounds yet, but as long as that exhaust note is good, that should go at least some part of the way toward getting riders on board.

As long rumored, it appears the revamped 2021 KTM 1290 Super Adventure will indeed have Bosch radar adaptive cruise control. However, it won’t be fitted as standard on either the R or the S models. Instead, it will only be available as an option. The system uses radar sensors to keep tabs on the area around your bike as you ride, and will send both optical and acoustic warnings to the rider to help avoid collisions.

We’ll of course know more precise details once the new 1290 Super Adventure formally launches, but for now, what do you think? 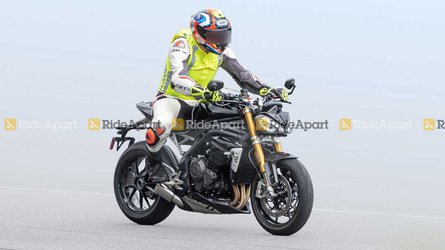 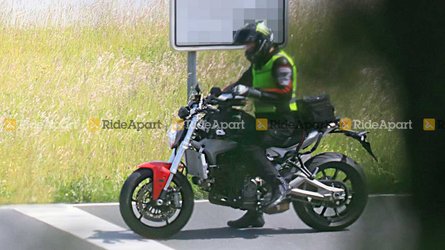 Spotted: 2021 Ducati Monster Shows Off A Polarizing New Look
By: Janaki Jitchotvisut
++
Got a tip for us? Email: tips@rideapart.com