In the Summer of 2019, I got my hands on the then brand-new Yamaha Niken, the quirky, three-wheel addition to Team Blue’s sport-touring lineup. My mission was to attempt to answer the question on everyone’s lips: what is it for?

I’ll be honest with you: I never really figured out what the answer was. Beyond engineering flexing and claims of additional grip, the Niken pretty much handled like a standard motorcycle, only more front- and top-heavy. Two wheels up front come at a weight and handling cost. So, when I found this video of French fellow rider Sarah Lezito stunting the Niken, I was understandably curious about it. 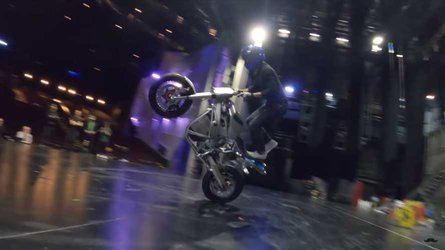 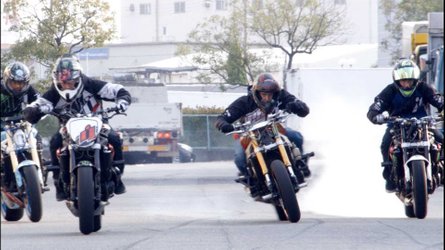 Stunt Riders Thrash It In Japan In This Excellent Video

At 580 pounds, the Yamaha Niken weighs heavy on the sport-touring scale. With two wheels at the front and all the weight forward, it isn’t exactly the first model that comes to mind when you think about motorcycle stunts. However, Lezito managed to make it work, and what she got out of the Niken was rather impressive.

Lezito explains that when accessory retailer SW Motech approached her and suggested she stunt a specially-prepared Niken, her first reaction was to ask them the same question we’ve all been trying to answer. Instead of a clean, proper PR reply, however, the owner of SW Motech simply told her that it exists to do crazy things.That, right there, is the best answer I’ve heard yet. Of course, that's all it took to convince Lezito. As she puts it, doing crazy things is in her wheelhouse.

The retailer outfitted the Niken with a few aftermarket parts, including a slick rear tire and a turbocharger. The latter added a healthy 70 horsepower to 847cc triple's output for a total of 185 hp.

Lezito took the Niken to her favorite stunting spot—an enclosed parking lot with plenty of room to have some real fun. There’s a saying about how real pros can make their trade look easy. Well, let me tell you, Lezito made skids and burnouts on the Niken look easy.

She whipped the behemoth around the parking lot like it weighed nothing—though she comments throughout the video that it was a rather violent experience due to the turbo and the bike’s layout. She says that you pretty much have to relax, roll with the punches, and resort to using the front brake because only using the gas doesn’t get you the slides you want.

Because the front-end is so heavy, she explains that she had no issues pulling a few stoppies—she was actually most concerned about wheelies, which she kept for last. Like the pro she is, however, she practiced a few wheel lifts before finally popping some serious wheelies, even tipping the bike far enough to drag the tail.

I’m still not sure what purpose the three-wheel Yamaha is supposed to serve, but one thing I know now is that it can be stunted and that the result is pretty darn impressive.