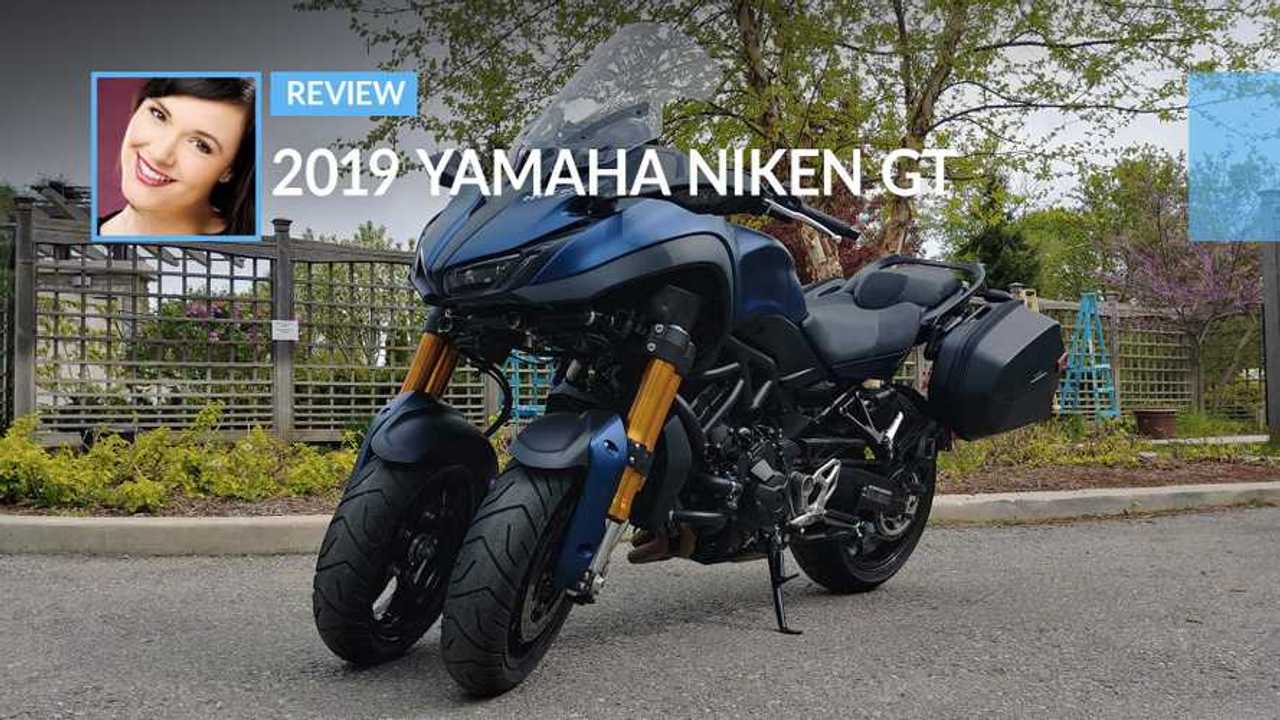 Yes: it rides like a motorcycle. No: it doesn’t stand on its own. Yes: it looks weird. Why: because why not. Alright! Now that we have cleared what most people are interested to know about the new 2019 Yamaha Niken GT out of the way, let’s dive in and have an in-depth look at Yamaha’s quirky three-wheel sport-tourer.

Yamaha introduced the Niken last year as an addition to its sport-touring lineup. In doing so, the company became the very first to launch a leaning three-wheel motorcycle on the market.

Then in November 2018, at EICMA, the manufacturer introduced a grand touring, “four season” version of the model, the Niken GT. By that, Yamaha really means a European four season without snow where temperatures go down to 40°F; not a North American four season. I tried convincing Yamaha to let me ride it in the winter, but they somehow seemed a little apprehensive. I would have made sick donuts…

The Niken GT builds on what the entry-level Niken already introduced last year, including of course the Leaning Multi Wheel (LMW) system that uses the Ackermann steering geometry principle, and what Yamaha refers to as a hybrid chassis with steel tubes and an aluminum swingarm. It then adds a few traveling comforts such as the heated grips, a taller windscreen, and sidecases.

While the bike has been advertised as a model meant to provide riders with additional confidence, let’s all be honest here: this clearly is Yamaha’s engineering department flexing. The company claims (justifies?) that the additional wheel at the front adds traction and stability; it sounds like PR spiel rather than physics. That’s until you get to experience it for yourself. When I picked up the Niken, I suspected I would get a little crash course in how to deal with this gorilla of a bike. All I got was “it rides like a regular bike, hope you like it, see you next week.”

If that’s all I’m getting, it can’t be that bad. Turns out it really isn’t. Everyone says it rides like a motorcycle, I am now one of them. The difference it makes comes in two folds. First, while I can’t actually feel the second wheel at the front, I did notice that the bike feels more stable particularly at lower speeds. Placebo effect or physics? I’m not sure, but if it works, it doesn't matter. Plus, though I didn’t get to ride it in the rain, comments to the effect that the third wheel definitely adds grip in the bends on the wet abound.

The additional weight in handlebar, however, isn’t just in my head. This is the biggest giveaway that there’s something funky going on at the front: turning the handlebar requires a little extra push. Not so big that maneuvering turns into a workout, but there’s definitely a difference with having a single wheel at the front. Oh, and the looks. Make that three folds then. The looks of amusement this bike gets you is a great reminder that you’re not driving any boring Japanese bike.

Speaking of weight, having an extra appendage comes at a price—a 100-lb price. The Niken GT is heavy (They don't call 'em Yamaheavy for nothin', amirite? -JM). After all, each wheel at the front receives its own adjustable tube fork and 298mm brake disc—that’s an additional wheel, suspension, and braking system. No official weight number is available yet for the Niken GT, but the entry-level Niken already weighs in at a hefty 580lb. With the additional equipment fitted on the GT, it wouldn’t be surprising to see its weight flirt with, if not bust the 600lb mark.

As any bigger bike goes, you feel the weight the most at low speeds and when maneuvering and this one is no exception. Combined with the extra shoulder width and the 32.9-inch seat height, the Niken GT becomes a bit of a monster to handle. Granted, its 32.9-inch inseam doesn’t make the Yamaha three-wheeler the tallest bike on the market, but with over a quarter of a ton to move around, being sure-footed makes a difference. At 5ft8, I came a little short from having two solid feet on the ground.

The Niken shares its powertrain with the MT-09, an 847cc, inline-three. While I personally have yet to ride on the MT, I noticed on the Niken that the three is at its best in the mid to high revolution range—that’s when it wakes up. At highway speeds, the engine does a decent job and provides a flexible-enough powerband to offer a comfortable touring experience, provided you’re not like me and the slight vibration in the grips doesn’t make your hand go numb.

However, takeoffs require a bit of a workout. Until it reaches the 3,000rpm mark in first gear, the engine lacks gut, creating a slightly sluggish launch. Then, once it gets going, the power delivery curve skyrockets. It’s a quirk of the engine that’s fairly easy to learn to deal with—it’s all a matter of deciding whether you want to.

I’ll hand it to the Niken, it is supremely comfortable and the touring-friendly saddle is a nice addition that truly makes it a good traveling companion. It offers a number of interesting features that make it an appealing tourer to consider, including a selection of driving modes, cruise control, and even a quick shifter. However, quirky doesn’t come in cheap: the price point on the Niken GT has been set at $17,299. In addition, keep in mind that it feeds on premium fuel only—no low-end brew for this steed.

All things considered, the 2019 Yamaha Niken GT is a good bike, but not a great one. I’m definitely not the target audience for this model and the Niken left me a little underwhelmed. It could use a bit more power and a smoother delivery. If the gorilla look does it for you and you enjoy the character of Yamaha’s three-cylinder mill, I think you’ll find the Niken to be right up your alley. I’ll stick to two wheels.