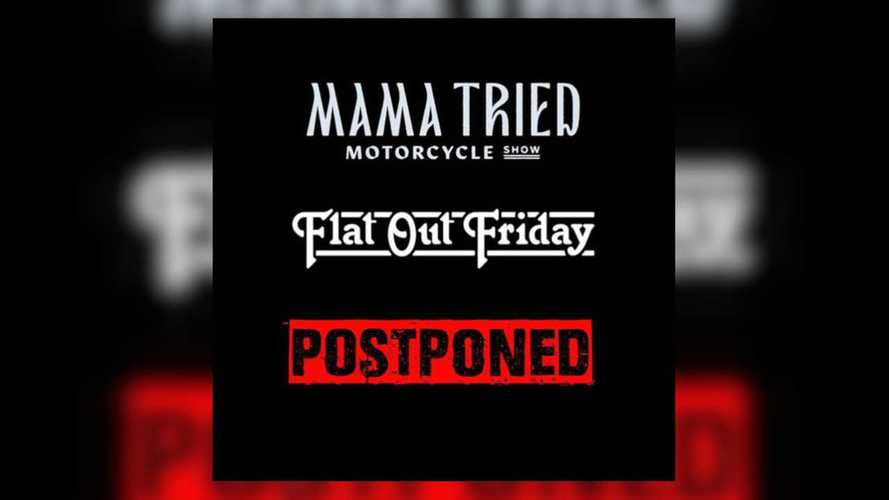 The big Milwaukee motorcycle weekend promises it will reschedule.

Perennial winter season midwestern highlights Mama Tried and Flat Out Friday jointly announced the postponement of both events due to COVID-19. The weekend was originally scheduled to start today, March 13, 2020 and run through Sunday, March 15 in beautiful Milwaukee, Wisconsin.

“Due to COVID19, Flat Out Friday and The Mama Tried Motorcycle Show will be postponed. We will have additional information on rescheduling once that becomes clearer, based on a fluctuating situation. Thanks to all the racers, riders, Builders, Sponsors, Vendors and fans for your support, but the most important thing is for everyone to be safe. And stop hoarding toilet paper,” the official statement on Mama Tried’s webpage and social media channels reads.

MotoGP And WSBK Races Rescheduled Due To Global Viral Outbreak

Since that initial post, the organizers of Mama Tried have made some additional clarifying statements on social media. “A great many of you have expressed concerns about the tickets you have purchased, and all tickets will be honored when the event is rescheduled. As of right now, we don’t know when that will be, possibly this summer or fall. It's hard to say at this point as the situation is in flux,” one further statement read.

“Looking forward to getting back to the regularly scheduled program as soon as we can. See you all in the near future! Stay positive! Stay safe everyone!”

“Let's not forget that there is a great deal more than inconvenience at play, which is the health and safety of everyone involved and the vulnerable people they may be connected to. Let's try to keep that in mind. There are strange times ahead. So, let's all try to stay positive and bask in our love of bikes and the rad people in this community. So, stay tuned, stay safe and stay positive. Let's all take care of each other until this sorts itself out,” continued another post.

The initial  announcement was officially made on March 12. It’s unclear how many people had already traveled to or begun traveling to participate in the show. However, as the Mama Tried organizers point out, the best thing everyone can do right now is stay safe, keep our communities safe, and maybe work on some bike projects by ourselves for awhile. (In related news, guess who just got a new Flex-Hone? Now I get to try out Director Jason’s handy cylinder-honing instructions and hopefully get my engine in tip-top shape pretty quick.)

It's also worth noting that on March 12, Wisconsin governor Tony Evers declared a public health emergency in the state. The Wisconsin Department of Health Services recommended that all gatherings where 250 people or more might converge should take the precautions of postponement or cancellation to prevent disease spread for the time being.