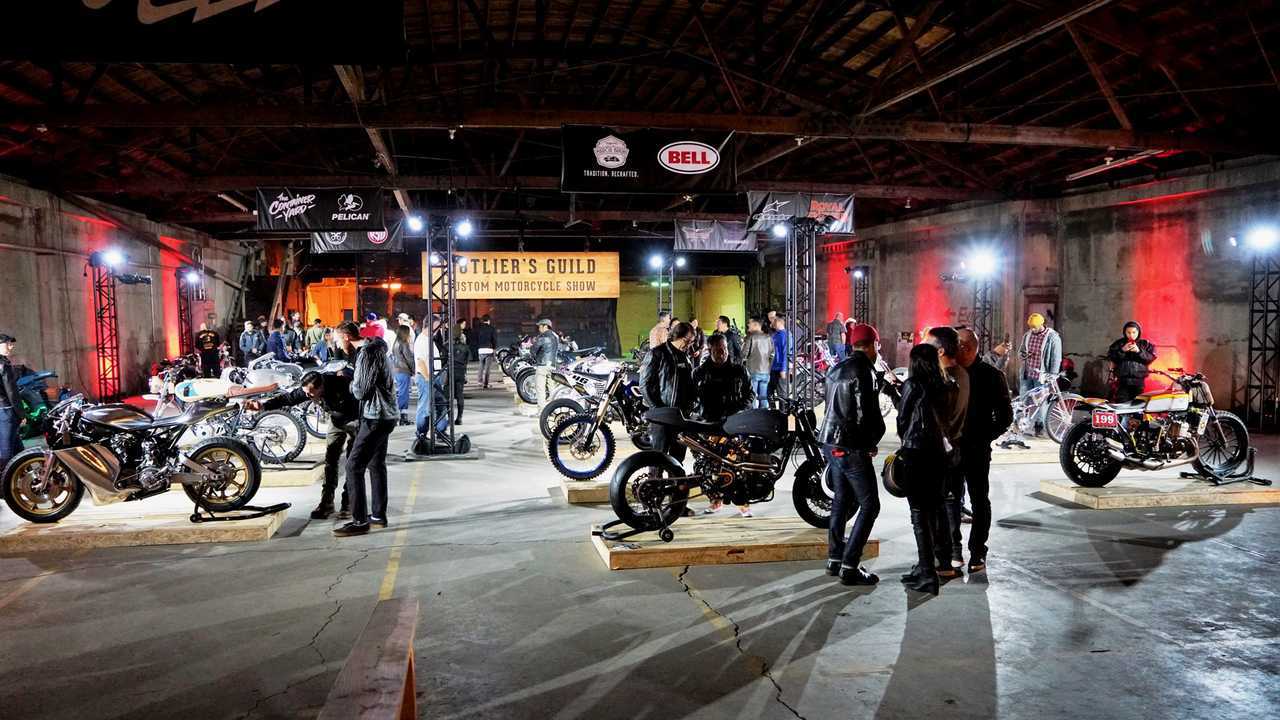 Motorcycle shows used to be low-class affairs held out in front of a bar, or at a fairgrounds somewhere. About a decade ago—with the popularity of maker culture, artisanal everything, and cafe racers—a new breed of hip, more cultured class of show was born. This is exemplified by the Handbuilt Show in Texas, and the One Show in Portland. The Outlier’s Guild Motorcycle Show first brought this type of artistic exhibition to America’s biggest motorcycle market, Los Angeles, California three years ago.

The One Show returns to Portland

Yes, there are the traditional choppers and such at the O.G. Moto Show (which is what everyone calls it. Ironic, since it is one of the newest), but it is the bikes that defy easy categorization that really grab the attention. There are always bikes there that mix elements of many styles to come up with something unique. Often, a slightly modded vintage bike done with an eye toward style, will impress in its minimalism in a way that a be-farkled bling-mobile never could in its bedazzled glory. Coco Channel would probably agree.

Kawasaki has been there from the start, and the cool factor is starting to show in their new product offerings. Last year they were showing off the Z900RS in its orange and root beer glory, along with a vintage Z1 rate bike pulled directly from the display at their HQ in Brea, CA. This year they choose the show as the official launch of the W800 Cafe and hint that more retro W-bikes are coming. Looking at the bike, you can’t help but wonder if the subdued black and grey paint scheme was the best choice as the signature color; though it does make it look more like a home built cafe racer, that is not an entirely good thing.

It is refreshing that there was not a single Honda CX500 build there, and few of the bikes were on those fat-ribbed Firestone tires that have spread like an STD through the custom bike scene as of late. There was plenty of hand-formed raw aluminum though, and quite a few fully custom frames. Of the assembled bikes in different styles from different builders, two really jumped out at me, and they could not be more different.

The first is the Honda CB750 turbo by Kiyo’s Garage dubbed “Cherry Blossom” which combined go fast parts with show bike paint in a tasty package. The centerpiece of the long and low “digger” is a tweaked Honda SOHC motor, fitted with a vintage R.C. engineering turbo kit, complete with ATP mechanical fuel injection. In many ways, this bike is the sequel to the twin CB750-powered bike he won best in show with at Born Free 8 a few years ago. Both of these Hondas are regularly run at the drag strip or El Mirage dry lake bed, despite paint jobs that likely cost thousands of dollars.

The other bike that had mouths hanging opened the entire weekend was almost impossible to wrap your head around; Max Hazan’s KNTT. Those letters translate literally into “Knucklehead Tourist Trophy” and in the metal into a cross between a Harley-Davidson Knucklehead and a Ducati sportbike. A custom made trellis-style frame supports a 1200cc v-twin with two “front” cylinders for better breathing. Out back is a custom-fabbed aluminum swingarm, and rolling on Morris mag wheels support the bike at both ends. All this is wrapped in a polished, raw-aluminum fairing with matching tank and tail section. All this was hand formed by Hazan Motorworks so perfectly it makes lesser builders want to take up cross-stitch.

The O.G. Motoshow's organizers—Jay Lossa of Lossa Engineering, Ralph Holguin of RMD Garage, Stan Chen, and John Pangilinan—do an outstanding job of curating the show for maximum freshness and you seldom see stale styles or bikes you saw last year. That does not mean everything is brand new or even a new build, however. Some bikes were just rare, like a stock 1968 Honda CB450P police model, or a Riedel Imme R100. Occasionally some bikes do sneak through that only serve to show how innovative everything else at the show is though, like a “murdered out” Honda CB750 on balloon Firestones that was so five years ago.

2015 called, they want their fat tires back.

Missing from this year’s show was a live rock band, but it is possible there was just no room for them in the venue—L.A.'s rad Container Yard—among the bikes, art, food trucks, beer garden, and vendors. The show has grown every year, and next year they may have to move up to a larger space. Luftgekühlt, the ultra-hip air cooled Porsche show that also started in L.A., suffered a similar fate and last year. That show ended up at a lumber yard in Torrance, which makes a certain kind of sense if you know your Porsche history.

I bring up Porsche, and that show specifically, to raise the point that much like downtown L.A., the vintage motorcycle scene is getting gentrified, for good or ill. The days of getting a desirable, clean, 1970s bike out of some old guys garage for less than $1000 are now mostly over. Hopefully, the new monied enthusiasts will continue to enjoy their bikes at events like Super Hooligan flat track races, and not just stick them all in a corner of their living room or man cave.