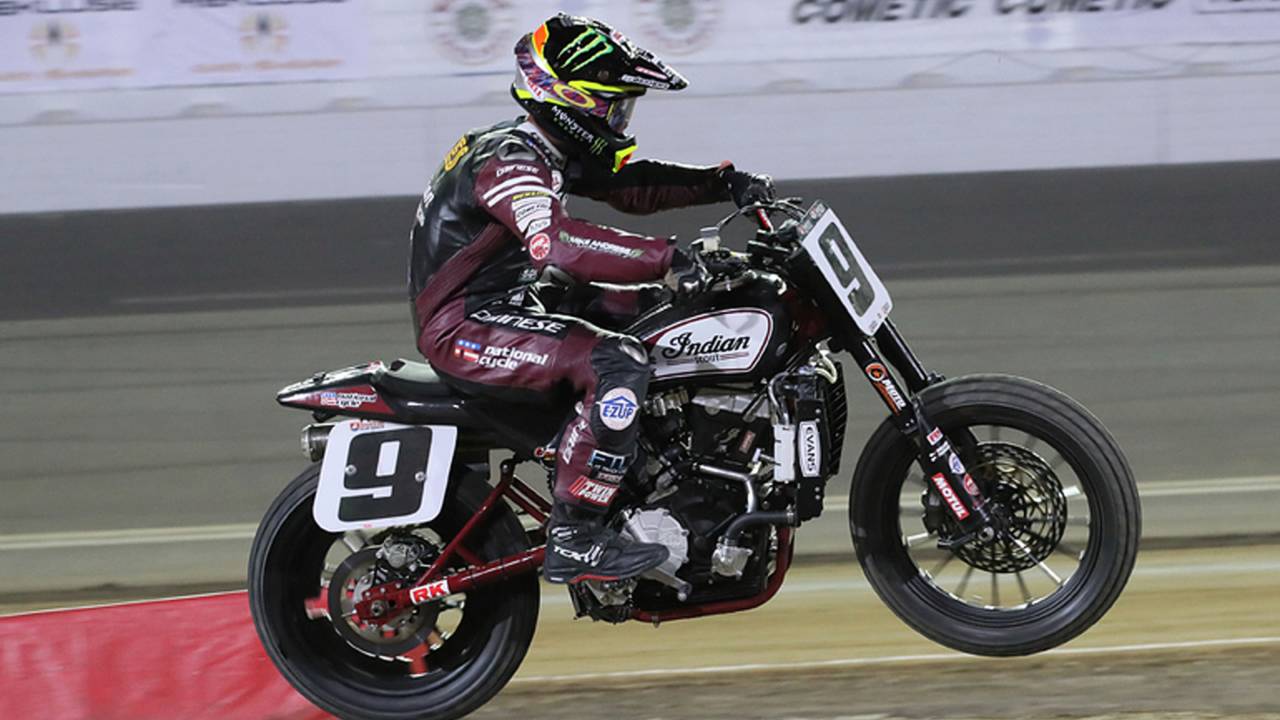 I made a lot of hay around here this past year about how Indian completely dominated American Flat Track in 2018. Any racer aboard an FTR750—whether a member of the legendary Wrecking Crew or one of the many Indian-mounted privateers—was pretty much guaranteed a win. Indian riders won 17 of the 18 AFT races during the 2018 season, and in most of those races Indian riders swept the podium and took most of the top ten slots besides. To say that Indian had a good year of flat tracking is a massive understatement.

Riding high on its phenomenal season, Indian just announced 2019's Wrecking Crew roster. Unstoppable flat track juggernaut Jared Mees returns once again to eat everyone else's lunch and dash the dreams of all competitors. With him come Salinas, California's own Briar and Bronson Bauman who are stepping into the big time after a very successful 2018 season as scrappy privateers. In addition, former Wrecking Crew rider Brad "The Bullet" Baker returns as the team's technical advisor and riding coach.

“We’re excited to bring back Jared, and his championship pedigree, as we embark on the next chapter for Indian Motorcycle Racing," said Indian's President of Racing, Technology, and Service Gary Gray. "We welcome Briar and Bronson and are proud to have them represent our brand on and off the track. When it comes to racing, we’ve assembled some of the most talented professionals in the sport, and we’re looking forward to the upcoming season.”

Mees and Company have a tough year ahead of them in 2019 thanks to AFT's, shall we say, questionable new rules that allow everyone but Indian to run larger throttle bodies (among other things). I'm sure the Wrecking Crew will endeavor to persevere, though. Stay tuned here for some hot flat track action once the season starts up again.

After back-to-back AFT championships in 2017 and 2018, Mees returns to the 2019 Indian Wrecking Crew with Crew Chief Kenny Tolbert, Mechanic Bubba Bently and Jimmy Wood on suspension. Dick Tibbits also returns and will aid all three Wrecking Crew riders with nutrition, fitness, and mental preparation. Team operations for Briar and Bronson will be conducted by Paul Langley and S&S, while Dave Zanotti will serve as crew chief. Michelle DiSalvo has signed on as Briar’s mechanic, while Bronson’s mechanic will be named at a later date. Indian Motorcycle Racing also welcomes the return of Dean Young as Wrecking Crew team manager.

“We’re excited to bring back Jared, and his championship pedigree, as we embark on the next chapter for Indian Motorcycle Racing. We welcome Briar and Bronson and are proud to have them represent our brand on and off the track,” said Gary Gray, Vice President – Racing, Technology & Service for Indian Motorcycle. “When it comes to racing, we’ve assembled some of the most talented professionals in the sport, and we’re looking forward to the upcoming season.”

One of the key team members who will assume a leading role as a technical advisor and rider coach is Brad “The Bullet” Baker. Indian Motorcycle Racing is extremely proud to continue its relationship with the former AFT Champion and Wrecking Crew rider. Baker will closely support and mentor Briar and Bronson throughout the 2019 season by analyzing their on-track performance, help with race-day strategy and bike setup. Baker brings a championship-winning perspective and a wealth of knowledge and experience on the FTR750.

The 2019 AFT season will be challenging for the Indian Wrecking Crew due to a new rule designed to increase competition.  This new rule will allow competitors using ‘production bikes’ to run 40mm throttle bodies while all FTR750 riders will be restricted to 38mm throttle bodies.

Over the last two seasons aboard the Indian FTR750, Mees has recorded back-to-back AFT championships and has tallied 20 total wins. Through nine races aboard the FTR750 as a privateer, Briar secured six top-five finishes, including a second-place finish at the Peoria TT and a win at the Williams Grove Half-Mile. Following Baker’s injury at X Games, Bronson filled in and ran his factory FTR750 in the final seven races. During that time, Bronson garnered his first top-five finish of the season and his first career Twins podium with a second-place finish at the Williams Grove Half-Mile.