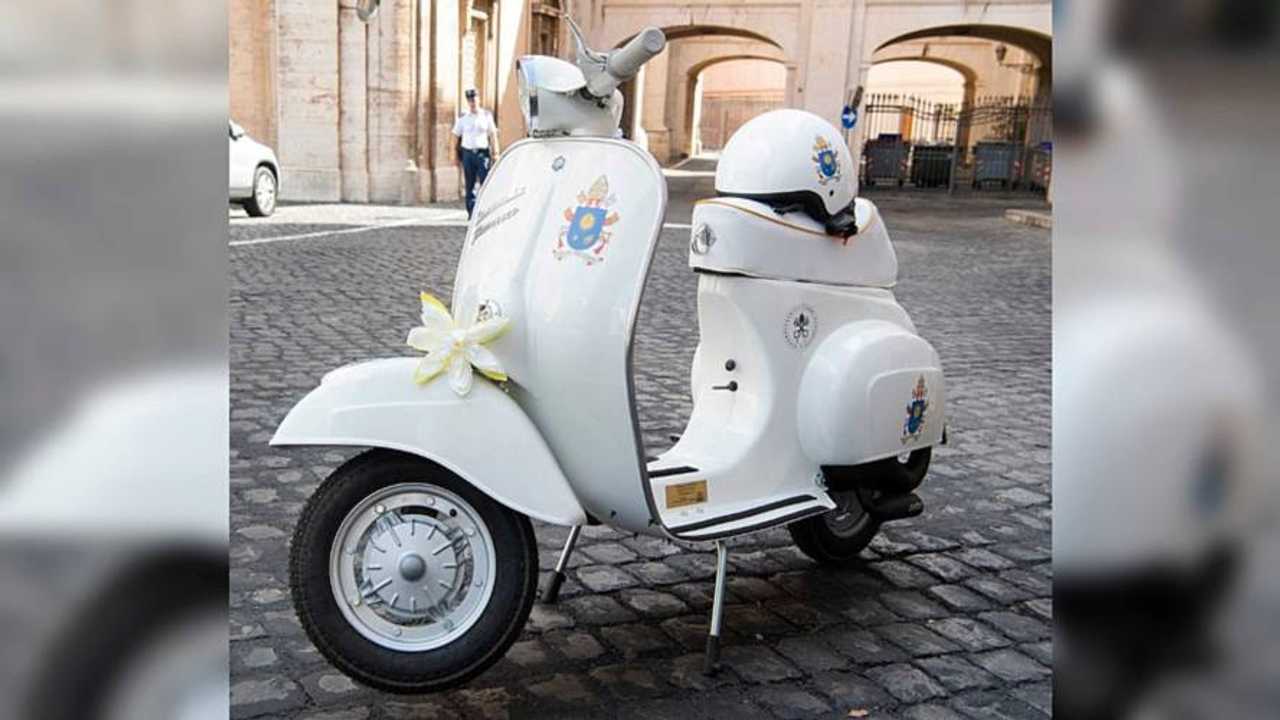 The Pope has upgraded the Popemobile, at least by our standards. He will now be able to ride around the Vatican in style thanks to a shiny white vintage Vespa offered by the Vespa nel Tempo Club. Let’s hope Pope Francis knows the recipe to a good miscela.

The occasion was the second International Rome Caput Vespa Rally that gathered over 600 Vespas and their riders in the Italian capital. The event took place over the Labor Day weekend and on Sunday, the Vatican was flooded with hundreds of Vespa scooters as the 640 riders attended the Angelus at St. Peter’s Basilica.

Prior to the mass, the Pope and his Almoner, Cardinal Konrad Krajewski, who met with founder of the Roman Club Vespa nel Tempo Giulio Ianiro as well as Vespa racer Giuseppe Cau. They offered Pope Francis a 1971 Vespa 50R in white livery decorated with the Vatican coat of arms, complete with a matching helmet. Underneath the Vespa logo on the front of the shield, in the same writing as the badge, the name Francesco (or Francis) had been added.

The Holy Vespa also sported a personalized license plate that reads BF362918—B for Bergoglio, F for Francis, 36 for the Pope’s year of birth and 2918 for September 2, 2018, the date the Vespa was received. Giuseppe Cau also threw in a copy of his autobiography “The Knight of the Vespa”. Cau was a successful Vespa racer 70 years ago.

Cardinal Krajewski even took the Vespa for a little spin because why not? Like all the other vehicles gifted to the Pope, the Vespa will be auctioned off for charity. Other vehicles on the list including a white and gold Lamborghini Huracan, an Opel Ampera (the Chevy Bolt’s European cousin) and even a Harley-Davidson! He could have built quite the garage, but charity is a more noble cause than building a personal kickass garage.