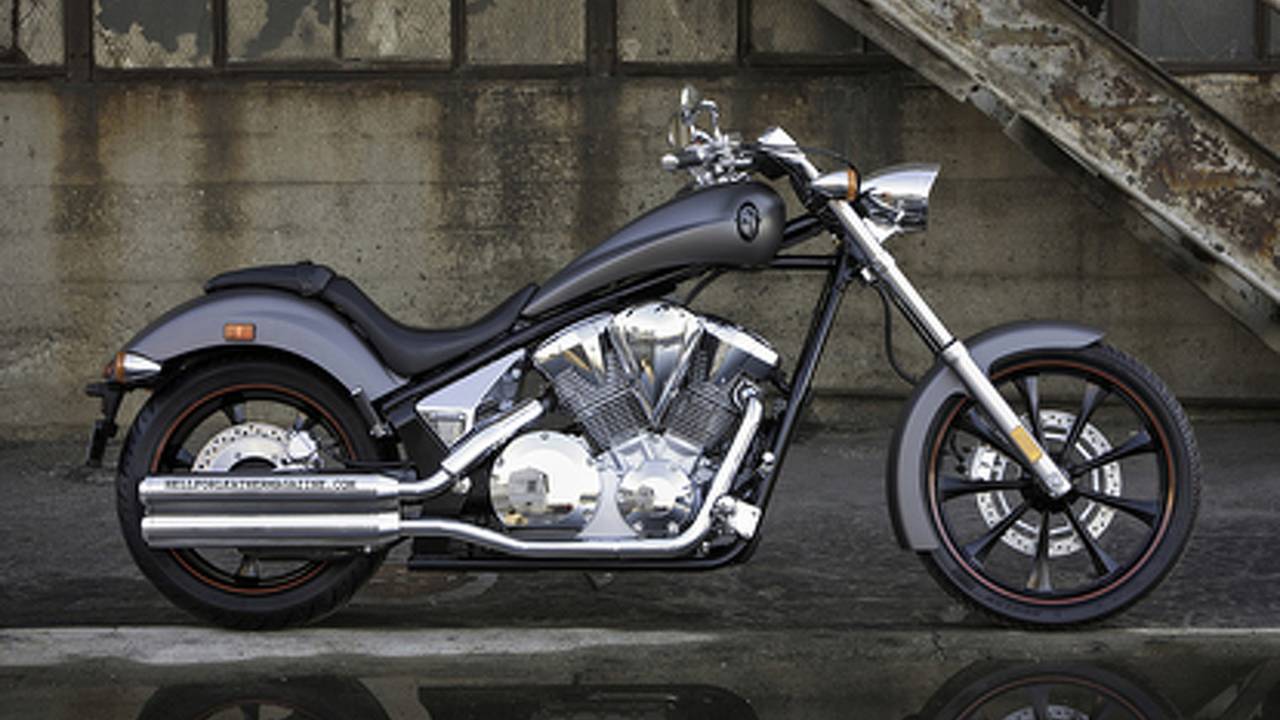 This is the Honda Fury, a chopper-style production bike from Honda. Due for an official unveiling at the New York International Motorcycle Show on Friday, this shot and details of the bike have leaked, revealing a machine that's identical to the Honda Fury patent images we brought you last week.>At 1808.5mm, the Fury has the longest wheelbase of any production motorcycle. It's powered by a 1312cc ...

This is the Honda Fury, a chopper-style production bike from Honda. Due for an official unveiling at the New York International Motorcycle Show on Friday, this shot and details of the bike have leaked, revealing a machine that's identical to the Honda Fury patent images we brought you last week.
>
At 1808.5mm, the Fury has the longest wheelbase of any production motorcycle. It's powered by a 1312cc fuel-injected and liquid-cooled V-twin -- the radiator is neatly tucked in between the front frame rails, check out the patent images for details. The 200 series rear tire is supported by a hidden monoshock, while the front tire is a seriously skinny 90/90-21. Controversially, the Fury uses shaft drive as opposed to the more traditional belt associated with custom-style motorcycles, although we suppose it had to differentiate the Fury from every custom Harley ever made somehow.

Our favorite parts are the wheels, the bladed spokes are both handsome and subtle and the red stripe offers a classy contrast to the understated grey paint on this example. While we'd prefer to see Honda developing more ambitious motorcycles like the 2010 Honda V4 or the Honda Electric Motorcycle, we suppose this is their attempt to give middle-aged men from the Midwest who never figured out that the Village People-look was actually intended to solicit butt sex exactly what they want.

We can't help but be impressed by how well Honda has been able to reconcile the style of non-functional custom choppers with the functionality of a production bike. The overall look is incredibly clean, but should be relatively safe and comfortable to ride and can even accommodate a passenger. However, we can't help but question the wisdom of creating a bike that's intended to hide rather than showoff its technology. Honda's choice to use a 1300cc engine for a bike intended to appeal to the compensating crowd is also somewhat puzzling, but could at least indicate a sub-$20,000 price tag.

If we can be bothered to tear ourselves away from setting up for our exhibition of actually innovative motorcycle design on Friday morning to head over to the International Motorcycle Show, we'll bring you shots live form the Fury's unveiling.

Publishing this story is going to be somewhat controversial. The Fury isn't scheduled for official release until the NY show on Friday. Honda failed to include Hell For Leather in its list of publications made privy to this embargoed information and therefore isn't subject to any contractual obligations or agreements to keep any of this private. Since Honda didn't enable us to compete on a level playing field with other media outlets, we had no choice but to move forward with publication once we obtained these materials. This isn't an embargo break; had we been subject to any contract or agreement we would have honored it. This is a good old-fashioned leak.

Remember, you can click the image up top for a bigger version. It'll expand to fit your browser window, but is actually 1280px wide, so you can use it as a desktop wallpaper if you save it.