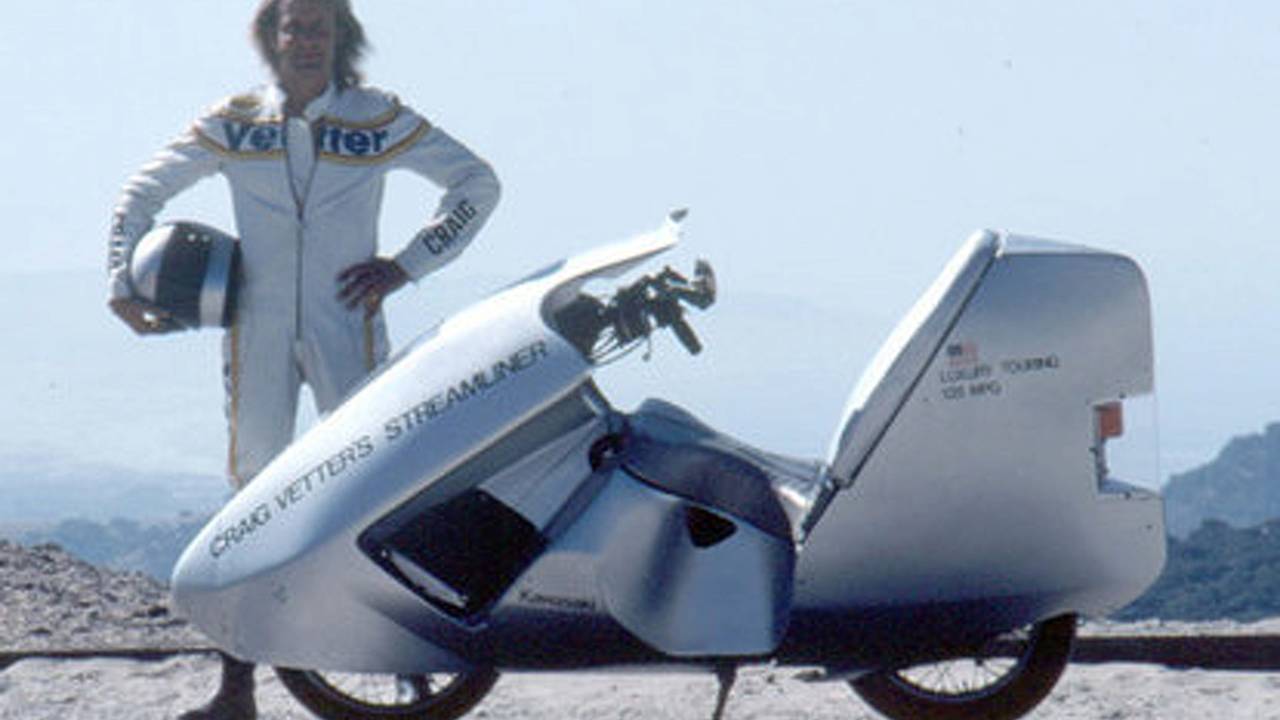 Ol' Craig's at it again.

If there's one positive thing about the FIM stealing TTXGP's electric racing platform, it's the return of streamlining and feet-forward riding positions to racing rulebooks. That's right, Craig Vetter's finally gotten what he's been asking for decades: aerodynamic motorcycles. What's that you say? Your R1 already has a fairing? Think again, we're talking about all-encompassing, functional aerodynamics and not just a place to stick logos.

Fully streamlined motorcycles were initially banned in 1957 after manufactures expressed a concern that motorcycles covered in dust bins didn't look like production bikes. A clear marketable connection was needed between the bikes that were racing and the ones in showroom in order to justify the costs incurred by manufacturers.

The lack of functional aerodynamics are one of the main reasons MotoGP bikes are still slower than Formula One cars, despite superior power-to-weight ratios and the absence of drag-inducing downforce. The fastest 800cc bikes are now reaching speeds in excess of 207 miles per hour, yet F1 cars are hitting 221+ on the same circuits.

Despite the concerns of conventional wisdom, it's inarguable that racing motorcycle would be faster with streamlined fairings. Traditional concerns expressed against such fairings include stability in crosswinds and while cornering, but these have been proven unfounded both in theory and in practice, witness the high speeds possible on machines like the Peraves Monotracer and EcoMobile. Just like in car design, the effects of variable wind conditions can be included in the design of fully streamlined fairings.

The full streamlining clause in the FIM e-Power rules reads:

Solo motorcycles and 'vehicles with 'feet-forward' configurations within the criteria listed below are permitted in order to improve energy efficiency, according to the following provisions:

Airfoils or spoilers may only be fitted on solo machines when they are an integral part of the fairing or seat. They must not exceed the width of the fairing nor be positioned above the height of the handlebar. Sharp edges must be rounded off. No movable aerodynamic devices are permitted.

Any part of the streamlining which faces rearwards must be finished with rounded edges.

The rider must be completely visible from either side except for the rider's hands and forearms which may be obscured by bodywork, the inclination of the number plate must not render the front number plate invisible when viewed from the front.

The minimum angle of inclination: 45°

Any part of the bodywork may not exceed 1000mm in width at any point.

For events on public roads, when required by law: mirrors must be shatterproof and fold back when the vehicle is on one side. The mirrors must retain their normal configuration when vehicle is upright.

Any design should take into account the characteristics of the course, corners and gradients.

The TTXGP eGrandPrix rules are very similar, differing in the following areas:

TTXGP: No part of the bodywork may come in contact with the ground when driven at normal racing speeds.
TTXGP: It must be possible for the unloaded machine to be inclined to an angle of 30 degrees from the vertical without any part, other than the tyre, coming into contact with the ground.
FIM: The minimum angle of inclination: 45°

Streamlining represents a clear benefit to electric motorcycle racing. Unlike MotoGP or SBK racers, which can make up for their lack of aerodynamic efficiency with excessive power, electrics are still exceptionally short on power and on the ability to store enough power to complete long distances at high speed. By exponentially reducing the effects of aerodynamic drag, streamlined bikes will have a clear advantage in making the most of the limited power and capacity available.

With the re-introduction of streamlining to motorcycle racing, we're adding a technology from which we could see real benefits on road bikes. Vetter's already seen 470mpg from 125cc bikes at highway speeds, compound that with the exceptional efficiency of electric motorcycles and we could see even better economy figures while massively increasing the useful range of existing electric platforms.