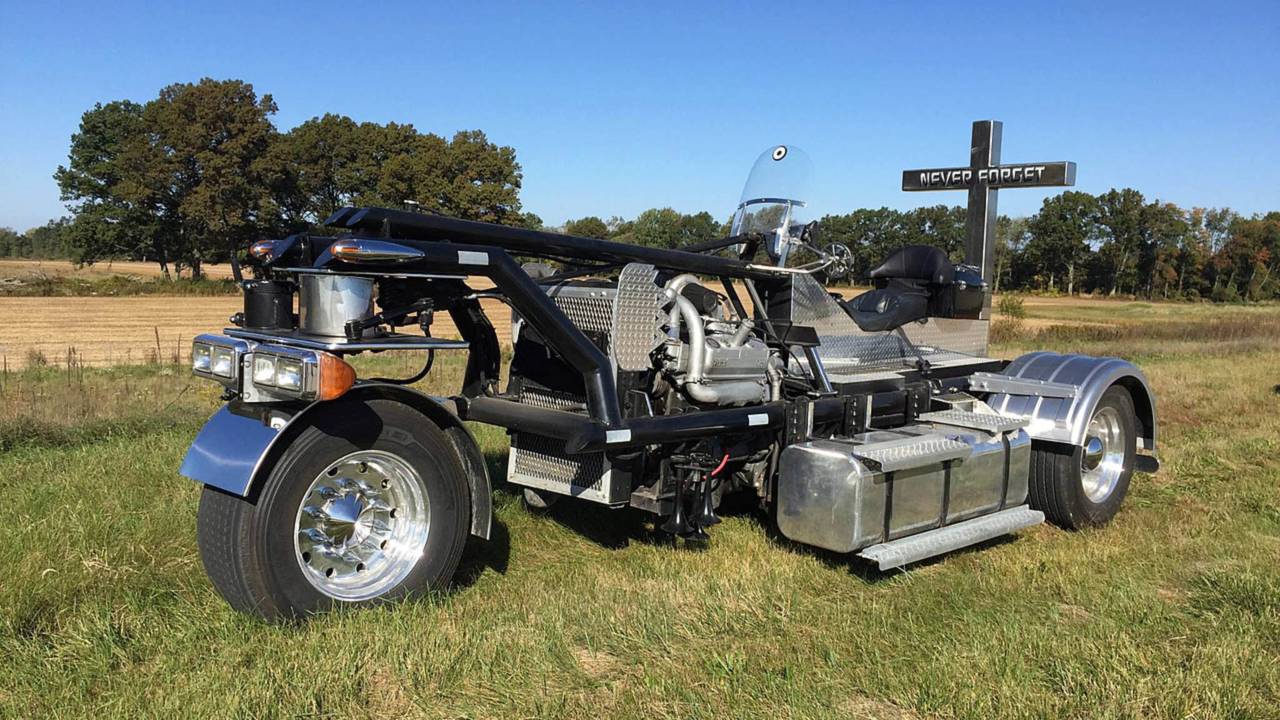 Make riding safer has become a mission for many companies, including Jim Gesto's. His approach is much different from the others though: make bikes bigger.

Built up from heavy truck parts, the Tower Trike

They say everything is bigger in America. Trucks, food, buildings, everything! We can now add motorcycles to that list. Is it a trike? Is it a truck? Why not both? Jim Gesto's creation looks like a hybrid of those two motorized opposites and it's heading for production! And you thought a Honda Goldwing was big!

Meet the Tower Trike, a humongous bike... thing built using truck parts. If the point of building such a monstrous ride seems ludicrous, Indiana-based builder Jim Gesto actually has a very serious reason for wanting to make bikes bigger. As a semi truck builder and owner of Belle Way Trucking, he has seen his fair share of motorcycle crashes. Bikes are largely invisible to and smaller than most other vehicles on the road, which makes them vulnerable. So Gesto started thinking about ways to solve the issue. His answer: make a bike bigger than a car, and so he did. His motto: "The trike for everyone who loves to ride but hates getting killed." Don't you hate dying, anyway?

ALIVE TO TELL THE TALE: What it's Like to Crash a Motorcycle

He looked into the maximum weight limit for a vehicle a still be considered a motorcycle and has been able to reach 10,780 pounds (that's the equivalent of roughly ten Goldwings). The Tower Trike features 15-inch wheels and an 80-gallon diesel tank that fuels the supercharged, turbocharged Detroit Diesel 6V92 engine. Mated to an Allison HT-740 transmission, the powertrain produces 335 horsepower and a staggering 1020 lb-ft of torque. It can reach a top speed of 84 mph and is equipped with an air suspension.

IS IT OR ISN'T IT?: The Weird And Wonderful World of Non-Harley Harleys

The Tower Trike is powerful enough to pull a semi, provides seating for two, and a storage compartment. The engine is custom built by Gesto's team. Another personal touch: each bike will also be mounted with a massive cross with the 10 commandments and a salute to police officers and firefighters, which also probably narrows the list of potential buyers who would rather keep Jesus at home while they're riding. Gesto hopes production will begin sometime in late 2018 and says he already has a few orders.