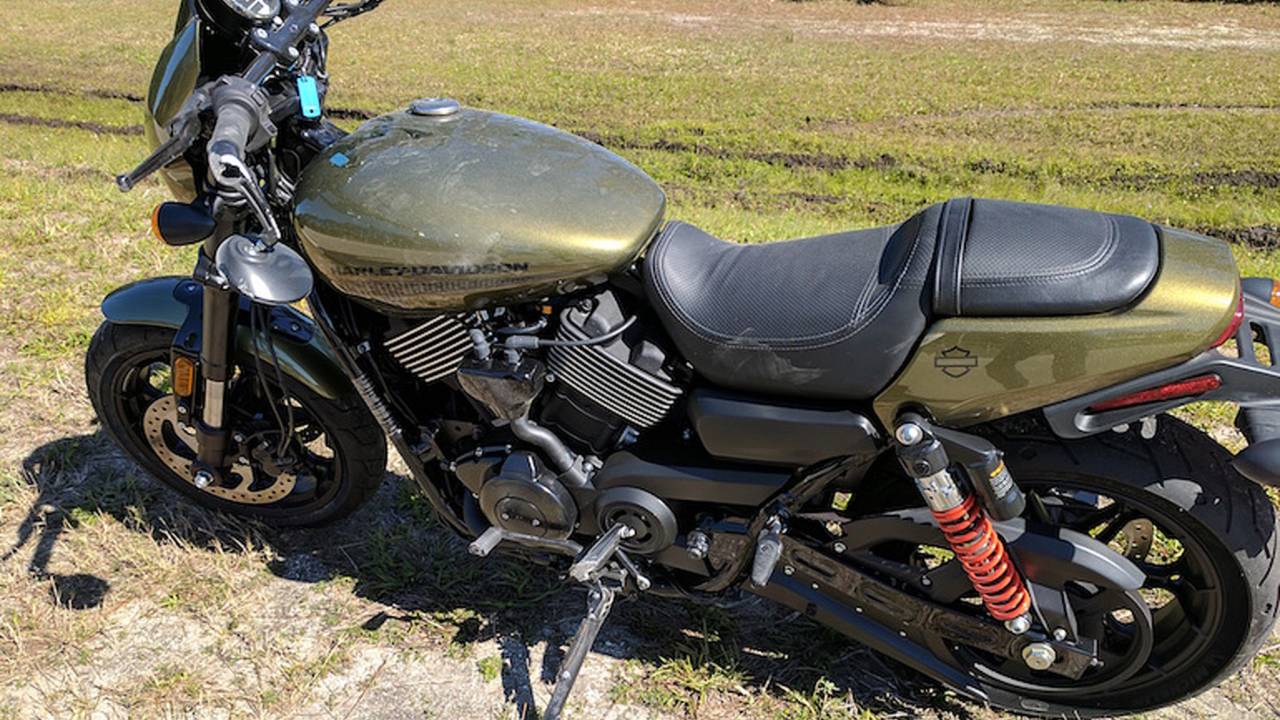 Here's Chris Cope's personal account of what it's like to crash a Harley-Davidson Street Rod and slide down the road at 60 mph.

That was one of the predominant thoughts going through my head as I slid down a Florida highway at 60 mph last month. It’s weird how the mind works. Time slows in a crash. Every tiny image burns into memory, so your brain can replay it over and over and over at night for the next who knows how many weeks.

In the moments before I crashed, I was riding the Harley-Davidson Street Rod along County Road 34 in central Florida. I’m not sure which county. The accident report simply records it as “County Code 61,” but the internet can’t agree on which county that is. Maybe I was in Indian River County; maybe I was in Suwannee County; maybe I was in Flagler County; I don’t know. I guess it doesn’t matter; I was somewhere. The road passing through that somewhere was long and straight – not the sort of place where one usually crashes – and the weather was perfect.

Before it all went wrong.

It was three days before my birthday, and the Coca-Cola smell of longleaf pine in Ocala National Forest had triggered nostalgia; the same aroma hangs in the forests of East Texas, where my family would go camping when I was a boy. Goddamn, I miss the Lone Star State – especially around this time of year, when the interminable wet darkness that is British winter has been dragging on for six months. In the sunny warmth of Somewhere, Florida, my body felt at home.

Also, I really like being a moto-journalist. It’s so much better than having a real job. And press rides are kind of like summer camp for me. My normal day-to-day routine is pretty lonely: working from home, spending my hours banging on the keys of an outdated Macbook. On a press event, though, I get to talk to a bunch of other people who love motorcycles as much as I do. I get to hear their stories. I get to share in their jokes. I get to meet new people. And I get to meet people whose work I admire.

The bar-end mirror suffered a fair bit of shredding but held up surprisingly well.

One of those people is the aforementioned Burns. As our group of happy mo-jos sped down the 304 at about 60 mph, he was riding just behind and to my left (we were in staggered formation). Ultimate Motorcycling’s Ron Lieback was directly behind me. After the crash, both would say they had not seen the 32-gallon black Rubbermaid slowly rolling into the road as we approached. Considering that I’m the one who ended up hitting it, I feel a little silly in admitting that I did see it, and, indeed, moved to avoid it.

In hindsight, I could have swerved more dramatically; I could have shot right out into the (empty) oncoming lane and missed that damned thing by 30+ feet. But I suppose the fact I ride most in Britain – where roads are almost always crowded or wet, or both – has taught me to not be excessive in my movements; otherwise, an attempt to avoid one problem could end up creating a new one. Additionally, in that particular time and space I wasn’t 100-percent sure where Burns was in relation to me; I didn’t want to swerve into him.

I kept my eye on the garbage can as I approached; it stopped rolling toward the road. Then, as the riders in front of me passed, it actually rocked away from my path. My mind sent a, “crisis averted,” message and I started to straighten out. But in the final moment before I passed, it leapt into my path – probably sucked into the road by draft from the bikes in front of me – and I ended up broadsiding it.

The pegs were also shredded.

The front wheel of the Street Rod made it over, trapping the can beneath the bike. I stayed upright just long enough to half-think, “Ooh, I wonder if I can ride this out?”, then I was sliding, then I was rolling.

Along with the concern about Burns’ impression of me, here are some of the other things that went through my mind as my body travelled roughly 150 feet:

– ”How am I going to explain this to my grandmother? She’s going to lecture me and tell me to get a real job.” (My grandmother passed away in 2015, but my deepest self refuses to accept this and still refers to her in present tense)

– ”Damn it, the Harley guys are going to be pissed at me.”

– ”I’m never going to be invited on a Harley press ride again.”

– ”How long am I going to keep rolling?”

– ”Why does this have to be happening to me? I just want to write about motorcycles. I wasn’t even riding stupidly.”

– ”I’m going to slow everyone down. They’re going to be late for the next photo stop.”

– ”Why have I not stopped rolling?”

– ”This is taking such a long time. Can I please just stop rolling?”

When I finally did stop I naturally popped to my feet. I was at the bottom of a ditch, unable to see the road. I felt slightly removed from myself, as if watching a POV crash on YouTube.

I would have lost a lot of skin without my Hideout jacket.

“This is the part where the person says they can’t breathe,” I thought. “That’s what always happens in those videos. Can I breathe? Yeah. I think I’m fine. Am I fine? Yeah, probably. That’s what everyone thinks, though, right? I should probably sit down. I’ll sit down. I’ll sit down here. Check for snakes. OK, sit down. Am I OK? Yeah, I think I’m OK. Am I even in pain? Maybe. I’m not sure. Hands; do they hurt? I don’t know. That was pretty exciting. No one’s going to be amused, though. Where is everyone? Did they see me go down? Maybe they rode on without me. I hope my phone works because I don’t know the way back to the hotel. Harley is going to be so pissed at me...”

Street Rod Lead Engineer Brian Dondlinger was the first to show up. I was trying to put together a very intelligent and heartfelt apology for having wrecked his bike but he kept interrupting me by insisting that I just stay still. My equilibrium was off; I wanted to get up again but had lost faith in the planet’s ability to stay still. The second person to arrive was Jeff Strunk, head of Harley’s motorcycle product planning.

“Just stay still,” he said. “Do you know your name? What’s your name?”

He followed this up with the sort of questions they ask people coming out of a coma.“What day is it?” “When were you born?” “Do you know where you are?” That sort of thing. I felt silly. I’d had my bell rung far worse playing rugby and the only thing people ever asked me in those cases was: “You good?”

For half a second I thought it would be funny to answer Strunk’s questions incorrectly. Tell him I was born in 1926, that we were at a baseball game in the Marshall Islands. I decided against it. He might not get the humor; then I’d end up spending the night in a hospital under observation rather than being able to go to the bar. Also, it’s generally bad form to be a smartass after wrecking someone’s motorcycle. They made me sit still for a few more minutes. Eventually, against the protestations of Strunk, Dondlinger, Burns and Street Rod Styling Lead Chetan Shedjale, I stood up and took off my helmet.

I didn't lose any skin, thanks to decent gloves, but the heat of sliding caused a blister on my palm.

“You good?” a paramedic asked.

“Wanna go to the hospital?”

“OK. I just need you to confirm that you are refusing care and have declined the offer of transport to an emergency facility. Sign here.”

Everyone else but Strunk cleared off. He filed an accident report with the world’s least interested deputy and I sat in the shade, wanting to cry from the feeling of embarrassment. I felt a deep sense of having let everyone down, but couldn’t quite figure out how I had done so. I remember wishing very much that I could have a rootbeer float. I text my wife, trying to be as nonchalant as possible about the accident. Apparently I was successful and she was not worried. This is her actual response:

“Poor you. Get Lemmy to give you a hug. I’ll bet he gives good hugs.”

You're welcome, ladies. My bruised hip.

The heat of sliding on the road had caused a blister on the palm of my left hand. I had been wearing full gear, so there was no road rash, but I could feel scrapes on my knees where they had rubbed against the fabric. I could feel, too, bruises forming in both knees, my left elbow, and my right hip. My right hand hurt like hell – I decided it must have been the first thing to strike the road when I fell – but I could tell it was not permanently damaged. Looking over my gear, there was not one bit of it that hadn’t kissed the pavement: helmet, jacket, gloves, riding jeans, boots.

A little more than three weeks after the crash, my right hand and hip are still a little tender but everything else has healed up. There are no cool scars to show off. The long-lasting effects will probably be mental; I have nightmares from time to time. I got back on a bike the day after the accident and have ridden regularly ever since, but I find I am a little less willing to push hard. I definitely pay more attention to road hazards. My hope is that I will take the lessons of this experience but regain my confidence before long. I still feel really stupid and embarrassed, but Harley has already invited me to another press event. John Burns, meanwhile, has assured me that seeing me crash did not make him think that I'm a dick.

"Oh, I thought you were a dick long before that happened," he said.

The Gear That Saved My Rear