Motorcycle technology and engineering is constantly improving, and with them come faster, better handling, and more durable and reliable machines. These advancements allow the envelope to be pushed a little further every year, with world records routinely being broken in categories pertaining to speeds or distances. As impressive as those are, that’s not what we’re gonna be looking at today. Instead we’ll be shifting our attention to the, let’s say, less orthodox world-records, almost all of which you probably didn’t know existed, and for good reason. They’re really weird. So without further ado let’s get into it.

There are dozens of world-records for “longest” in motorcycling. Longest distance ridden in a single trip, longest wheelie, longest stoppie, etc. But on March 12, 2013, Bharatsihn Parmar of India entered the world record books with the longest motorcycle on the planet with a 54 foot long bike. Talk about a wheelbase. 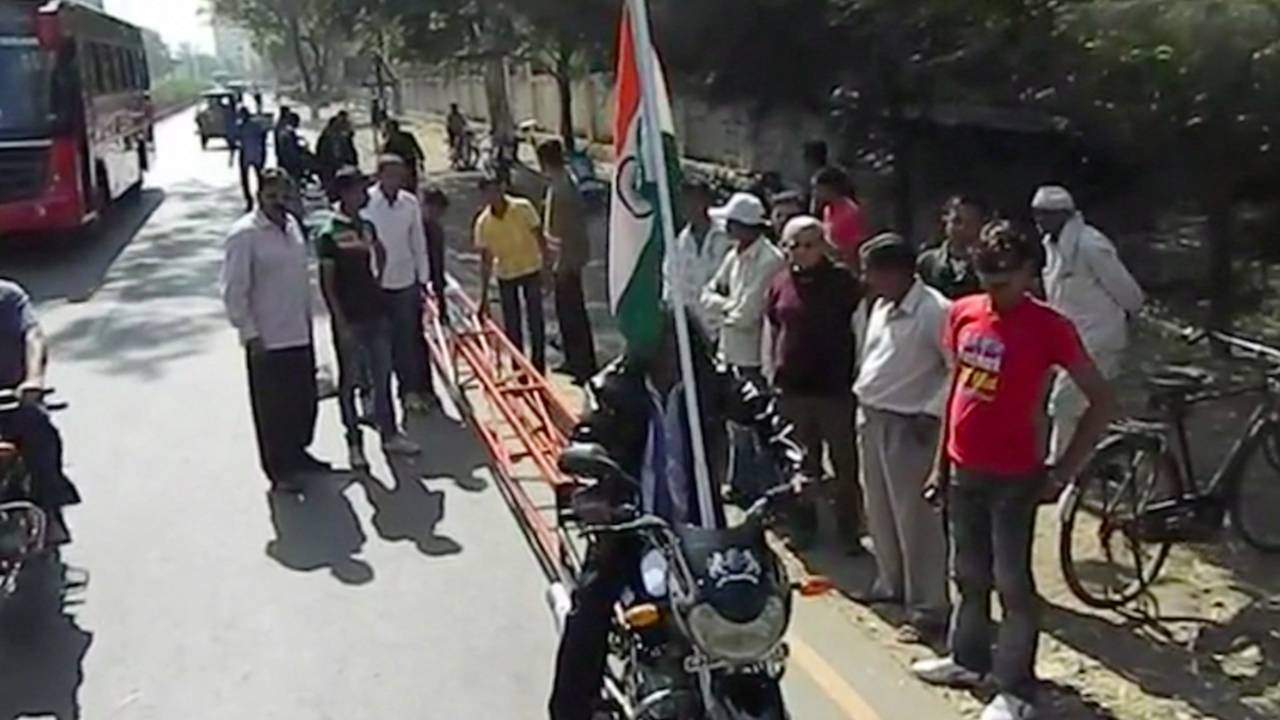 I'd argue the record should be for longest frame

Heaviest Motorcycle Carried Up and Down a Staircase

So I don’t even know how someone thought of this one, but apparently they did, and that person was Montystar Agarawal, who on June 21, 2014, carried a 242.5 pound (110kg) bike up and down eight stairs. 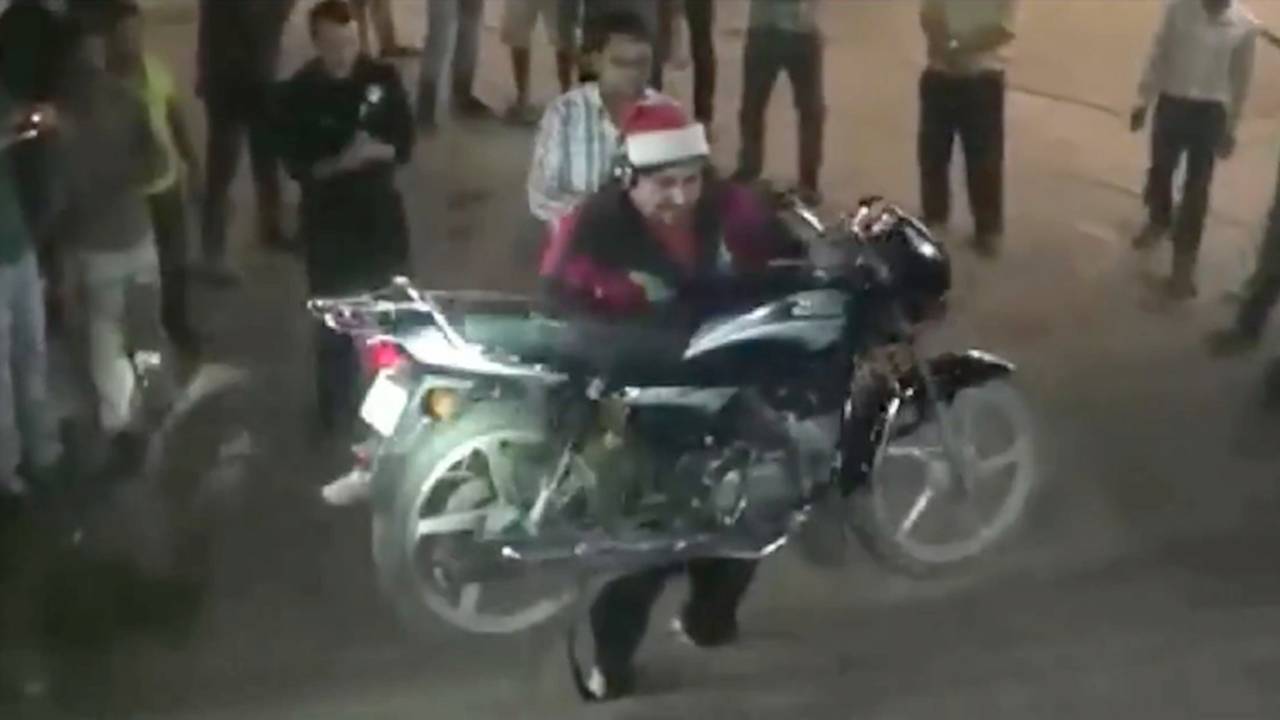 This is probably the least bizarre entry on this list, but it’s nonetheless pretty strange if you think about it. As someone who has previously owned a 49cc scooter, it blows my mind to think that someone had the idea to ride one the 1,177 miles of back roads from Portland, Oregon, to Los Angeles, California. On June 14, 2014, Lloyd Weema made America proud when did just that, landing him a place in the world record books. 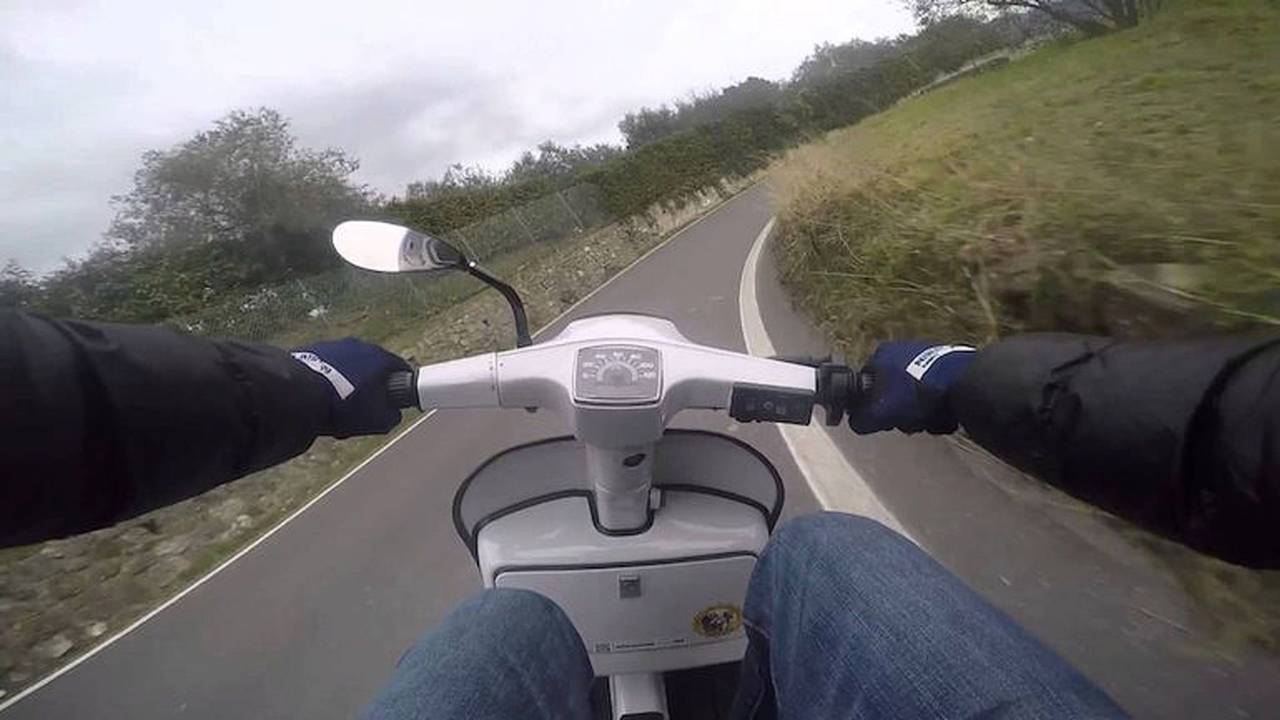 Imagine this view from Portland to Los Angeles

This is another weird one, though it’s definitely worth mentioning that this is actually a contested record that multiple determined weirdos have risked their neck over. The latest record holder is Gerard Jessie of the Philippines who on May 15, 2015, balanced a bike atop his head for 14.93 seconds, setting a new word record. 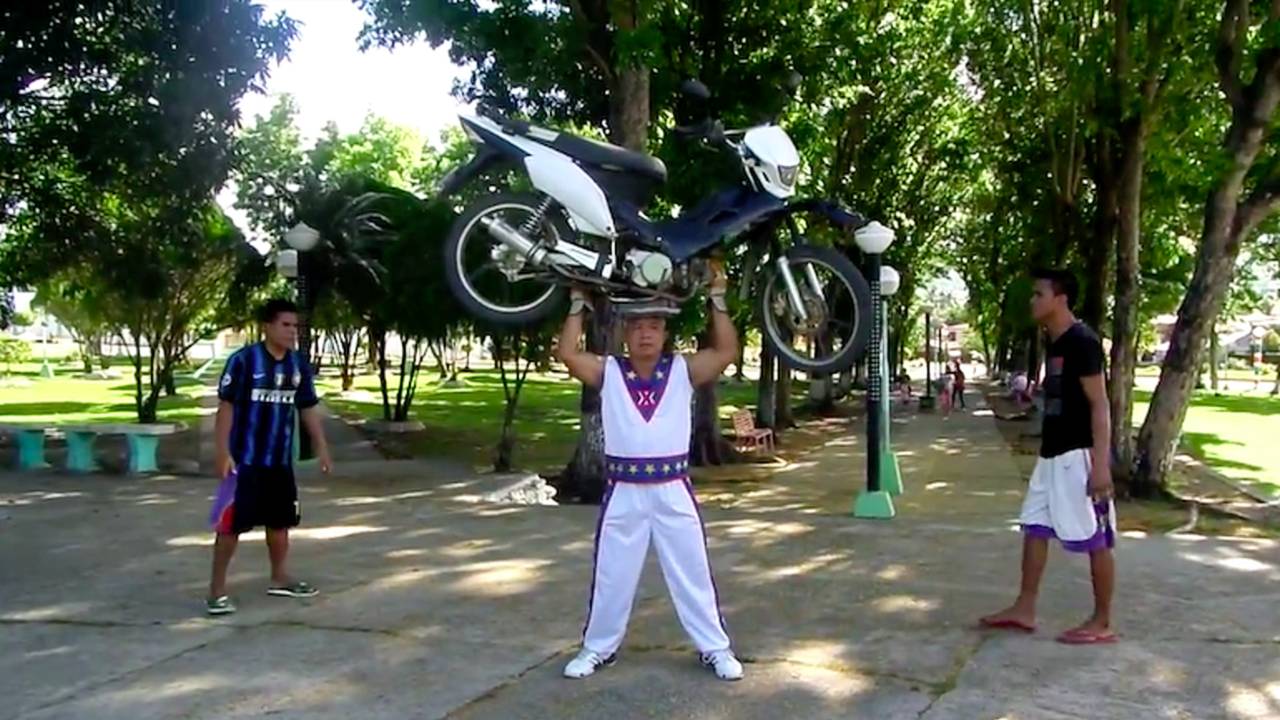 Gerard Jessie balances a bike on his head

MORE WACKY RECORDS: 58 riders on 1 bike at the same time

This is another world record that I’d file under “nobody else thought to attempt this”, and until writing this I didn’t know office chair trains were a thing. When you get enough people together with enough free time however, mediocre goals can be attained. That’s what students from Driestar College in the Netherlands did when, on June 22, 2016, 22 of them lined up a “train” of office chairs which were then pulled, albeit really slowly, by a vintage Yamaha scrambler. I’m confident this would be a particularly easy record to beat especially with a torquey V-Twin, so get on it America. Back in 2010, the Land of the Free became the record holders with an 18 chair train until those pesky Dutch kids stole our glory. 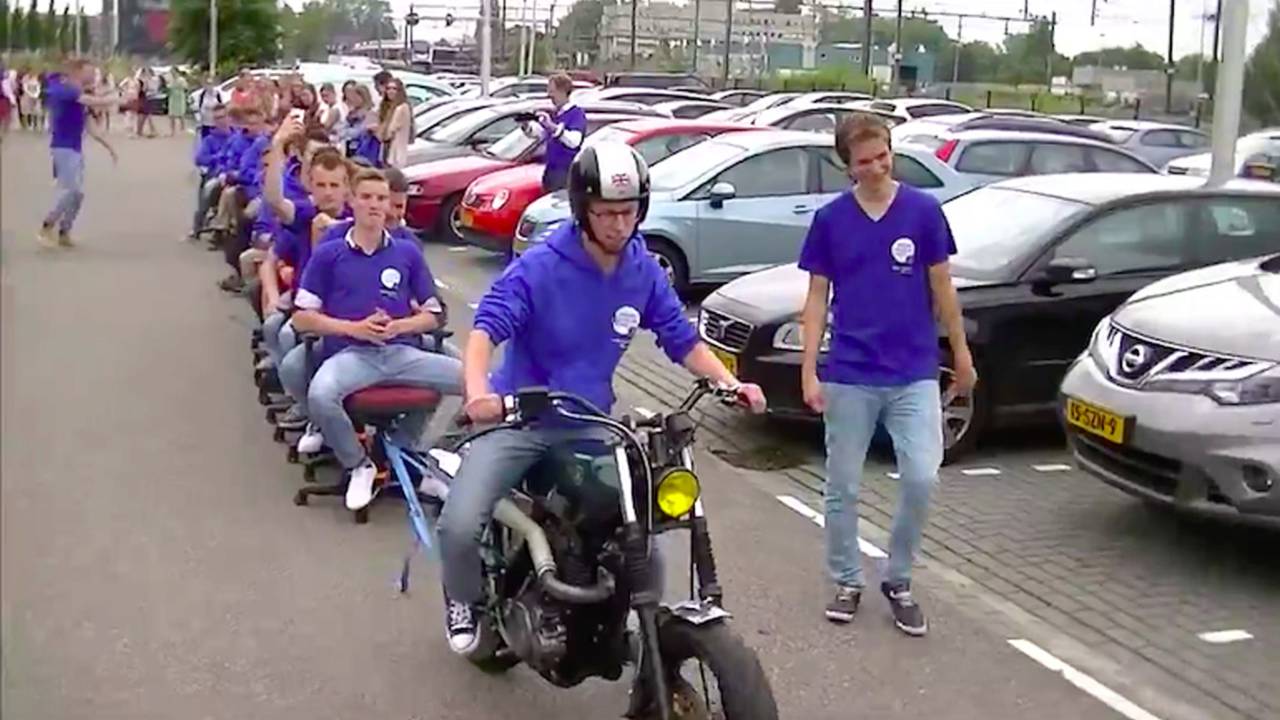 Fastest Speed Dragged Behind a Motorcycle

This is another one of those records that isn’t necessarily about skill and more comes down to a willingness to pull the trigger. In defense of Gary Rothwell, he opted to have a Suzuki Hayabusa drag him at speeds up to 156.3 miles per hour, so he has a Guinness world-record and we don’t. Rothwell achieved the feat by wearing a pair of boots with 2 millimeter-thick titanium soles. Making the record more impressive was the fact Rothwell stood behind the ‘Busa and held onto the passenger handle for the entire record. If you’re a fan of Patrick Fürstenhoff, aka the Ghostrider—if you’re not you really should be (click here to go down that rabbit hole)—you may remember when him and Rothwell went head to head attempting to set the world wheelie record.

I always love super specific records, that appear to be more based on minutia than skill. We’re all world record holders if you get specific enough. I’m extremely confident that I hold the record for most number of times the bridge two blocks from my house has been crossed on a black GSX-R600. On March 4, 2012, JT Hall of Colombus, Ohio, carved out a place for himself in the world record books when he bench pressed a Yamaha XT350 26 times. In reality, while I couldn’t do it, Hall more or less just benched 26 reps of 264.5 pounds. The motorcycle aspect is irrelevant, but I guess cooler than barbells? 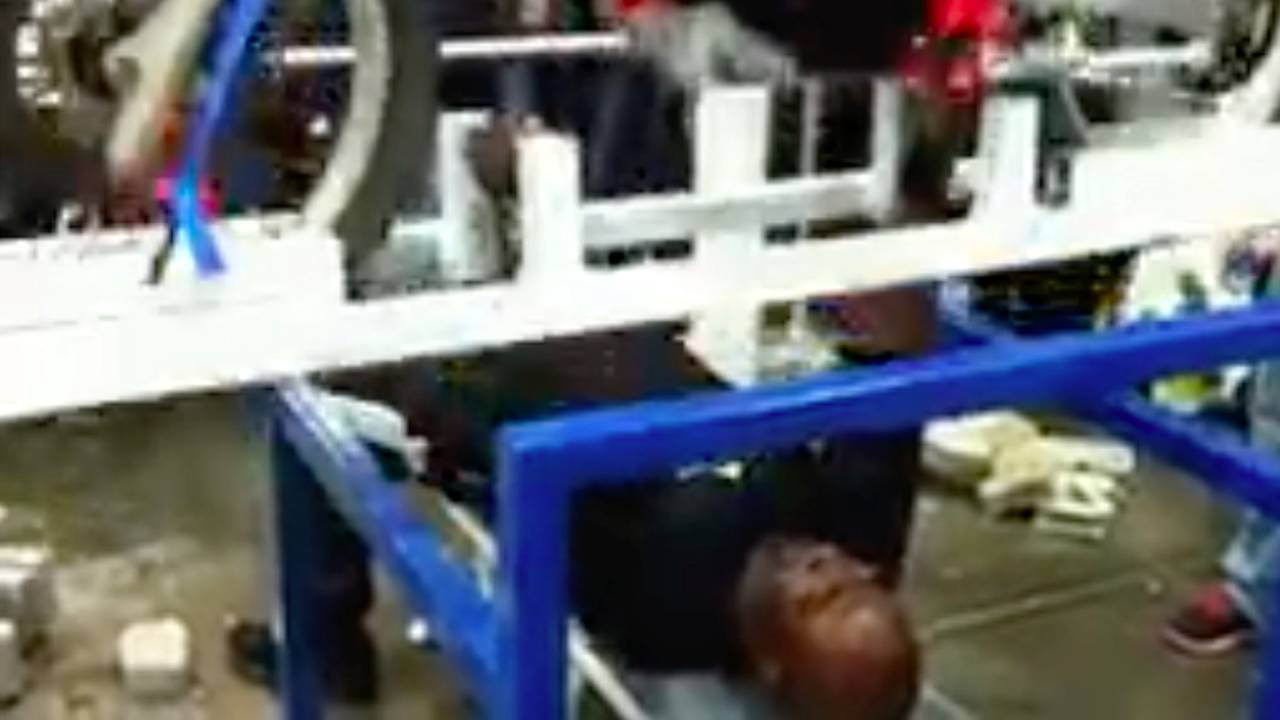 What? No Santa hat?

So there are a shocking number of these. Longest time to keep four running motorcycles stopped with arms, longest time restraining a Harley using hand grip, longest time to keep a running motorcycle stopped using teeth, the list goes on. This record is a little bit more unique because it was set by a female. On August 25, 2012, Juli Moody of Wilmington, North Carolina, entered the world record books when she held two running, 1,500cc motorcycles for one minute, 23.53 seconds. 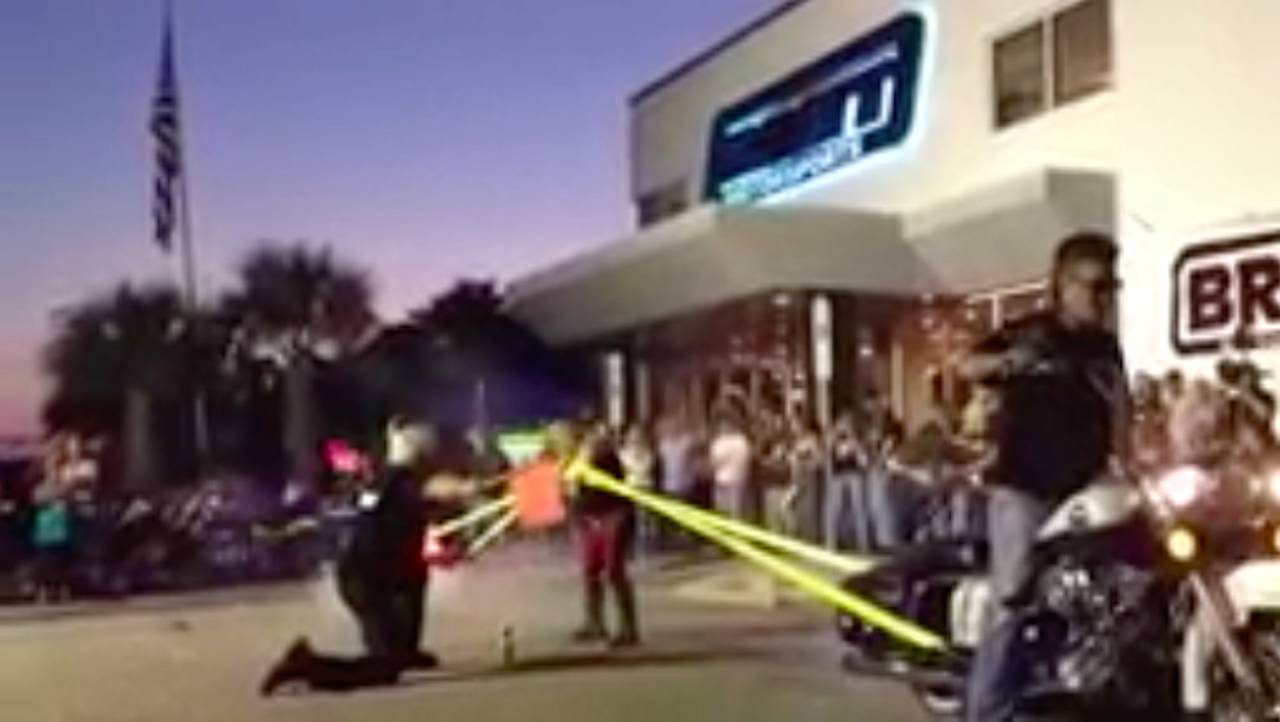 Youngest Person to Ride a Motorcycle in “The Globe of Death”

Another one for America. While I want to give the parents shit for this one, the kid here happens to be a seventh generation circus performer. In fact, then-four-and-a-half-year-old Maximus Garcia—who on August 16, 2006 became the youngest person to ride a bike in the “Globe of Death”—travels with his family performing the stunt on his little Suzuki eleven months out of the year. This was one really cool little kid. 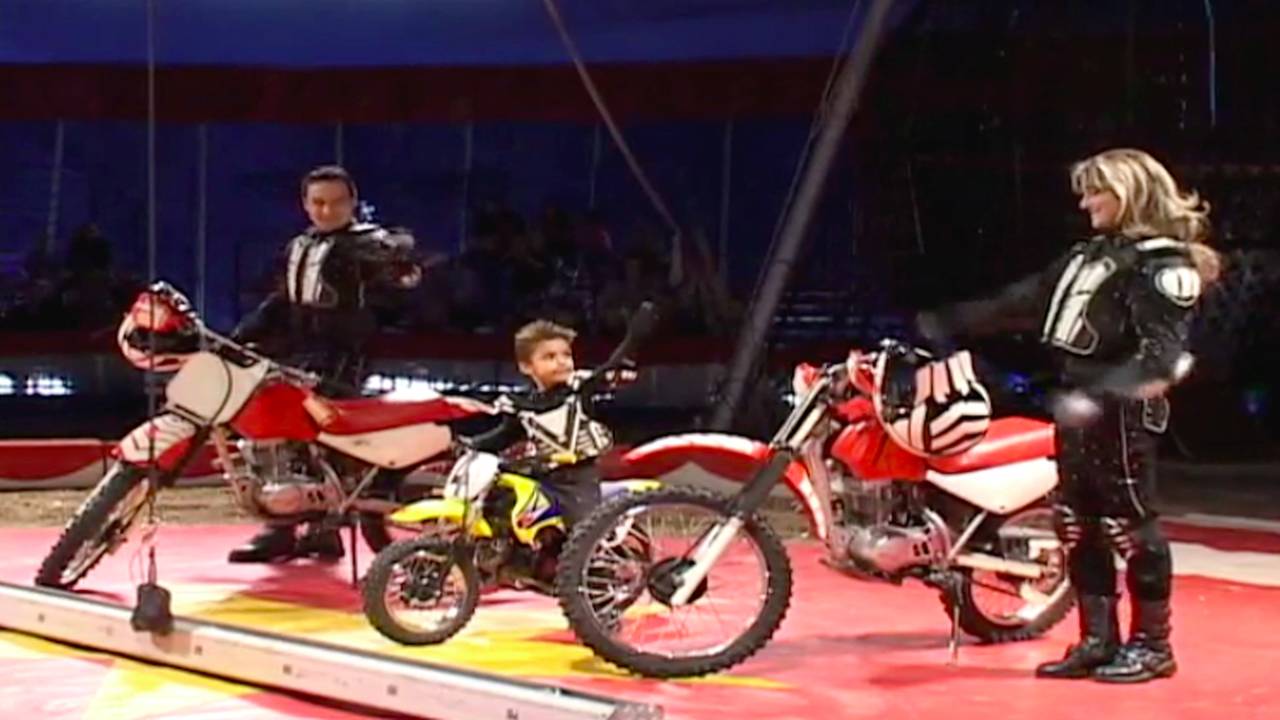 Longest Continuous Ride Standing on the Seat of a Motorcycle

A moving motorcycle wants to stay upright. This makes standing on the seat of a moving bike easier than you’d think, but this becomes a much taller order when the stunt is carried out for miles at a time without ever touching the handlebars or sitting down. On December 5, 2015, Ratnesh Pandey of India set a new world record when he stood on the seat of his Honda Unicorn for 20 miles (32.3km). 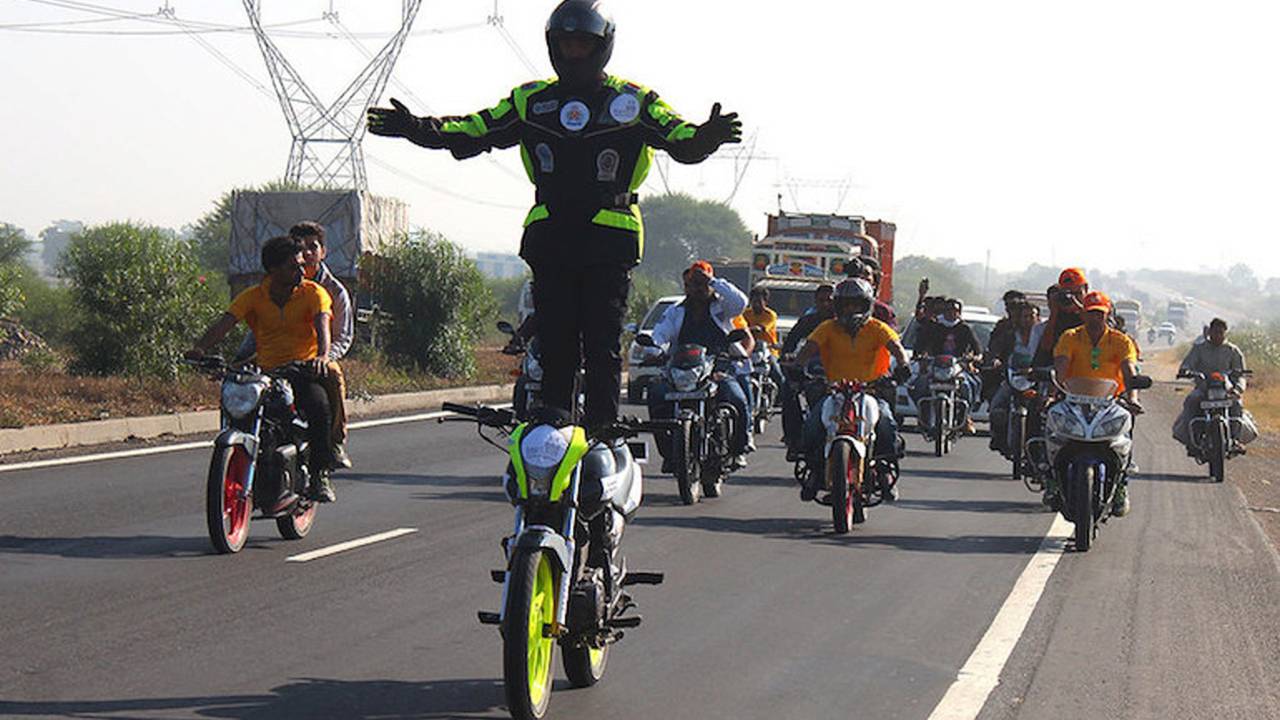 Ok so this record needs an asterisk next to it if you ask me. When I heard about this record I envisioned a person riding a motorcycle across a tightrope when in reality said motorcycle has no rear tire, there appears to be some harness or rig system, and there’s a person hanging under the bike acting as a counterbalance. Because of all the devices I don’t know if I fully recognize the record of Germany’s Johann Traber who, in May of 2006, clocked a 32.9 mile per hour wheelie atop a tightrope. Whether or not you think he deserves the credit, the video of him performing the feat is pretty wild.