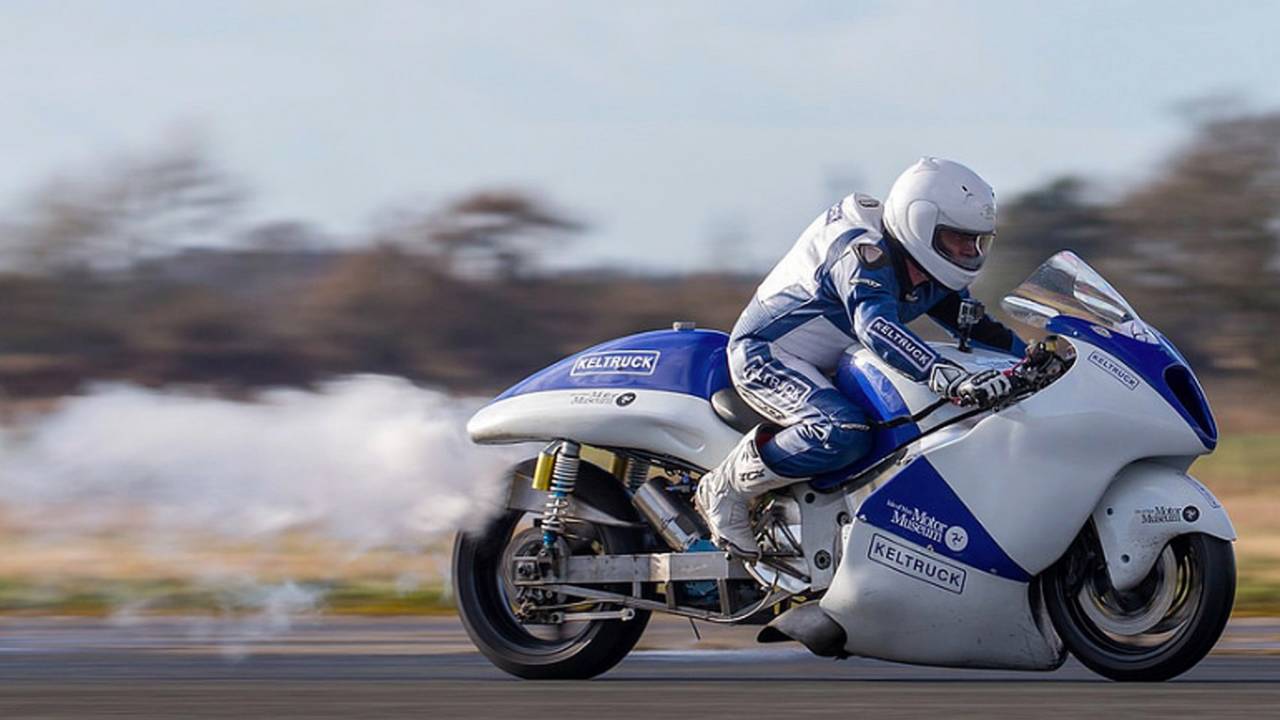 Chris Wedgwood aims to set a record aboard his modified, steam-powered Suzuki Hayabusa

Chasing speed seems to be in Chris Wedgwood’s blood. The avid motorcyclists grew up surrounded by bikes, and would eventually go on to take part in the famous Isle of Man TT. Now, a random series of events has lead to Wedgwood competing on two-wheels in a rather unorthodox class; steam-powered.

Wedgwood runs a construction firm and frequently utilizes low-loaders and other work machinery from Swedish manufacturer Scania. He buys said equipment from an outfit called Keltruck Limited. This is how the he wound up in a partnership with Keltruck, the largest independent Scania dealer in Europe.

With the deep-pocketed backing of Keltruck, Wedgwood has organized a team to help him go after a new world-record for steam powered motorcycles. The current record is held by American racer Bill Barnes, who set the two-wheeled steam vehicle record aboard a fully custom mount at just over 80 miles per hour in 2014.

Wedgwood will be gunning for a new world-record speed which him and the team think will be in the 120 mile per hour ballpark. Unlike Barnes, the Manxman will pilot a heavily modified Suzuki Hayabusa — if you can even call it that considering how little of the donor remains aside from its bodywork, chassis and forks.

Instead of the hefty four-barrel that normally powers the ‘Busa, Wedgwood’s Gixxer gets power to the rear-wheel via a steam generator. A paraffin burner heats the area around the steam generator which houses inside a coil of copper tubing filled with water. Cold air is then pumped between the coil and the heat source in order to regulate and produce the ideal temperature which is around 950 degrees (F) resulting in 2,000 pounds-per-square-inch of pressure which translates to power. The steam then runs into the Bower and Bell V-twin Compound Engine which directly powers the rear-wheel.

not your average V-Twin...

Though this may seem like a wildly primitive system, Wedgwood’s Hayabusa boasts half-a-dozen onboard computers and electronics system help to monitor and regulate the (very) old-school powertrain. So far in testing, the steam ‘Busa has already been clocked at a cool 77 miles per hour—just shy of the current world-record. Wedgwood and the team think the ‘Busa has a lot more oomph to dish out.

Steam power has come a long way since Stanley Steamer (no, not the carpet dude)

Wedgwood is heading to Elvington for one of the upcoming Straightliners World Record Weekends where, if all goes according to plan, the TT veteran will bag himself a new world-record. With dates scheduled in 2018 for April 17, May 19/20, June 19, July 17, September 15/16, and October 16, there’s a very high likelihood that Wedgwood will beat out Barnes’ current record speed. Below is a video of the “SteamBusa” running, and a quick cockpit clip of the unorthodox speed machine.

We’ll be sure to update you if/when this (very niche) world-record is broken.