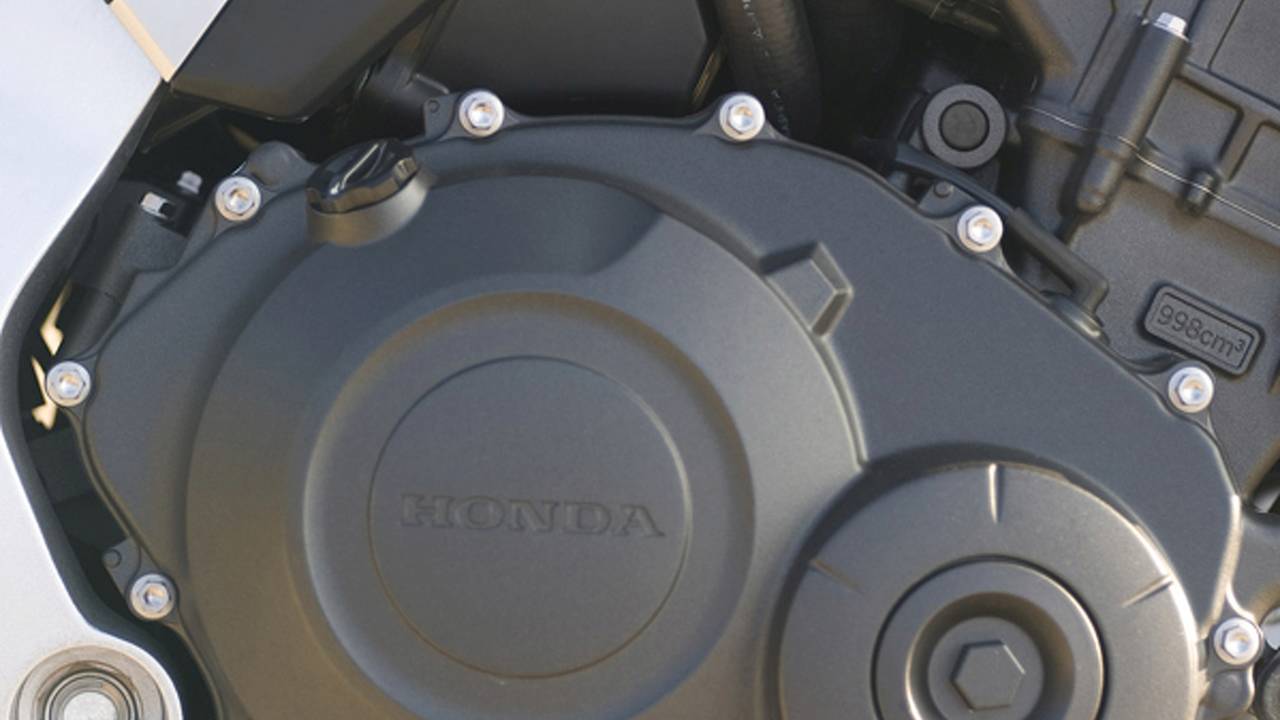 The Honda CB1000R isn’t, as you might assume, a naked CBR1000RR. The two bikes share lower engine case design that makes the engines appear the same from the outside, but the CB1000R makes a whopping 53bhp less. Is being a completely different bike from the CBR necessarily a bad thing? Photos: Grant Ray Why the CB1000R is not a naked CBR1000RR The CBR1000RR has a twin-spar aluminum frame

The Honda CB1000R isn’t, as you might assume, a naked CBR1000RR. The two bikes share lower engine case design that makes the engines appear the same from the outside, but the CB1000R makes a whopping 53bhp less. Is being a completely different bike from the CBR necessarily a bad thing?

The CBR1000RR has a twin-spar aluminum frame — two large pieces of aluminum rise from the swing arm pivot and meet at the steering head. You'd also see this type of frame on a Yamaha M1, Aprilia RSV4, etc. In contrast, the CB1000R has an aluminum backbone frame — one large piece of aluminum runs from the steering head over the top of the motor and splits into a Y before heading south to the swing arm pivot. This frame allows the CB1000R to hit a lower price point because it is easier to construct. Being in the middle of the bike, the frame is much better protected from crashes.

–Pistons are 1mm smaller and stroke is 1mm longer.

–Revised cylinder head and side-draft throttle bodies. First, because of the backbone frame that takes up more room, the large airbox needed a place to live. Second, downdraft throttle bodies like you find on the RR or any other racing machine, that provide a straight shot for air from the airbox to the intake valve are great for huge horsepower numbers over 10,000 RPM. In contrast, sidedraft intakes force the air to make a 90 degree turn before going past the intake valve and into the cylinder, improving low RPM cylinder filling and, with it, torque.

–Gearing. A CBR1000RR is geared to go 186mph, which is fun, but a 90mph first gear is hard to use around town. In contrast, the CB1000R delivers real acceleration from a dead stop without abusing the clutch and making a lot of noise. The downside? It's bouncing off the rev limiter at 145mph.

It sounds like I'm saying "tuned for torque", but there is a subtle difference here. This motor is built from the ground up to produce a specific powerband, not a quickly re-tuned version of the CBR1000RR engine. On paper the difference is subtle, but ride the bikes back to back and the difference is huge.

How the CB1000R stacks up with other 'nakeds'

The Diavel, Streetfighter, Z1000, CB1000R, Speed and Street Triples, Touno V4R, and Brutale 1090R are all built around basically this formula. Some, like the Street Triple are basically light-weight sportsbikes with lower gearing and taller bars. Others, like the Diavel, are hulking brutes that do 0-60 in 2.5 seconds. This is a crowded and poorly defined genre of motorbikes. Ride a few of them and you quickly realize they don't have much in common with one another.

Two things set the CB1000R apart from the rest of the crowd. First, it's price. Coming in at $11,000 means that it's less expensive than everything in the "category" except the Z1000. Don't for a second think that means that this is a cheap motorcycle though. Second, this bike is designed and built in Italy for the European market, but retains its essential Honda-ness (amazing fit and finish, slick shifting transmission, flawless electronics and reliability, nice ergonomics, etc.) Everything that makes a Honda a Honda is still here, even though the bike is technically Italian.

–Cover the rear brake in first gear and clutch up in second if wheelies are your thing. If wheelies aren't your thing, they will be after spending a week on the CB1000R.

–The dash fades from black to blue (and back again)

–The quiet factory exhaust is also nice to look at.

–It's comfortable. Seating is bolt upright, bars are narrow and feet are up and out of the way. Passenger accommodations aren't bad either and there are hand holds built into the tail.

–Ground clearance (not normally an issue for anything but choppers) is extremely limited. Try to cross a parking lot speed-bump two-up and you'll scrape the pipe pretty bad.

–The brakes generate an unnerving vibration and become progressively more grabby as speed decreases. Don't try a stoppie on this bike, you'll just end up with a locked front wheel.

–The fuel gauge could be more accurate or changed to a warning light. The tank is supposed to fit 4.5 gallons, but the gauge will scare you into filling up around 3.2.

–The factory mirrors provide a blurry view of your elbow and not much else.

–The bike is only available in black in the U.S. while Europe gets two other options: all white or red, white, and blue with gold wheels.