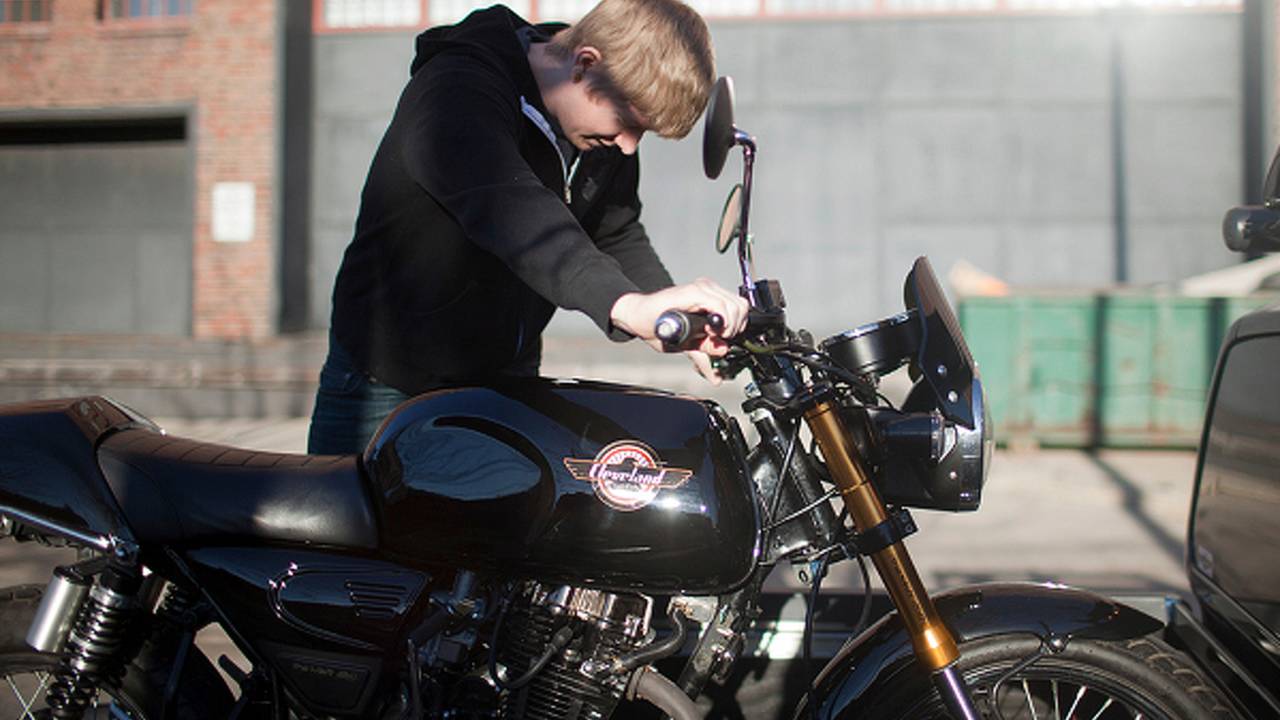 “Cool is being able to afford a bike that looks good and makes the owner feel good, but does not break the bank,” says Cleveland CycleWerks’ Scott Colosimo. He designed the bike you see here. When the 250cc Misfit goes on sale in March it’ll cost just $3,195, providing an affordable, desirable city bike or commuter. The Misfit weighs 80lbs less than a Ninja 250 and, according to Scott, can...

“Cool is being able to afford a bike that looks good and makes the owner feel good, but does not break the bank,” says Cleveland CycleWerks’ Scott Colosimo. He designed the bike you see here. When the 250cc Misfit goes on sale in March it’ll cost just $3,195, providing an affordable, desirable city bike or commuter. The Misfit weighs 80lbs less than a Ninja 250 and, according to Scott, can pull power wheelies in first and second gear.

Scott first reached out to us after Michael Uhlarik’s article, Motorcycling’s Missing Link called for more affordable, appealing small and mid-capacity bikes for the North American market. We’re jerks and didn’t email him back until my my article on The Super Motor Company combining low-cost Chinese production with western quality to create appealing Cub clones reminded us about Scott’s project. Cleveland CycleWerks is trying to use the tools of the latter article to achieve the goals of the former. Chinese production is enabling them to design and engineer a bike for American sensibilities, but produce it cheaply enough to actually make it attainable for new riders. The Misfit is over $800 less than that Ninja 250.

But while Chinese production makes the Misfit affordable, Scott is adamant that it doesn’t make it cheap. “I lived in China for six months straight to train my staff and hire world-class people,” explains Scott. “Over the past three years I have spent more time in China than in the USA, this is something we are completely committed to. Think about it, Apple, Dell, HP, etc all manufacture in China, it’s all about finding the right partners, people who understand quality. Our manufacturing partners build under ISO standards and know how to trace a defect back to its source. We are extremely serious about producing high quality, extremely affordable bikes and strive every day for improvements. We put the bikes through 100,000 miles of testing.”

The Misfit will be the second bike that Cleveland will sell. The Heist, an attractive 250cc bobber, is already selling well here. New Jersey’s PIT Motors LTD distributes the bikes in North America and stocks parts (there’s learner law-compliant 125 and 50cc models available elsewhere), giving Cleveland access to over 100 US dealers and rapid parts availability nationwide.

Scott and his new bike.

Look at components like the USD forks, wavy rotors and remote-reservoir shocks and it’s hard to see how the Misfit manages such a low price. Sort of a cross between Cafe Racer and standard style, the bike has flat bars for an upright riding position, a shapely tank and a removable pillion seat cover. The 250cc, four-stroke, air-cooled single-cylinder hangs out in the wind for everyone to see.

Weighing just 296lbs (dry), the Misfit puts out 16bhp and 12lb/ft. It’ll be geared for acceleration in stock trim, limiting it to a 75mph top speed, but Scott tells us 85 is easy with different gearing. Emissions are 50 state compliant, although Cleveland’s currently waiting for CARB to mail the certification for California.

“It’s really the sort of Café bike that everyone attempts to build in their home shop, chopping out all the bullshit tabs and brackets that you don’t want and putting on all the cool components that you do,” explains Scott. “Being a small company, we build bikes that, as enthusiasts, we want to ride, and this directly translates to the types of bikes that other enthusiasts and beginners can appreciate.”

Unlike the bike you’d build in your garage, the Misfit is totally legal, safe and reliable. It’s the kind of thing you could abuse as you learn to ride, scare yourself on a little bit, drop a few times, but still depend on day after day to get you to work or school.

“We are serious about changing the industry,” continues Scott. “One goal of CCW is to shift America’s perspective on motor size and efficiency. A 1000cc motor for an around town bike is wasteful and difficult to handle. We develop lighter bikes with smaller motors because they are easy to handle and extremely fun on a daily basis. Open up one of our bikes on a back road and the experience is exhilarating, taking one back to a time when bikes felt faster because they were more connected with the rider and the road. Riding is about the experience, not about how much you spent on your machine. We have millions invested in new product development and will have 5 models in production by the end of 2011”