The Most Exciting Motorcycle News From AIMExpo 2014 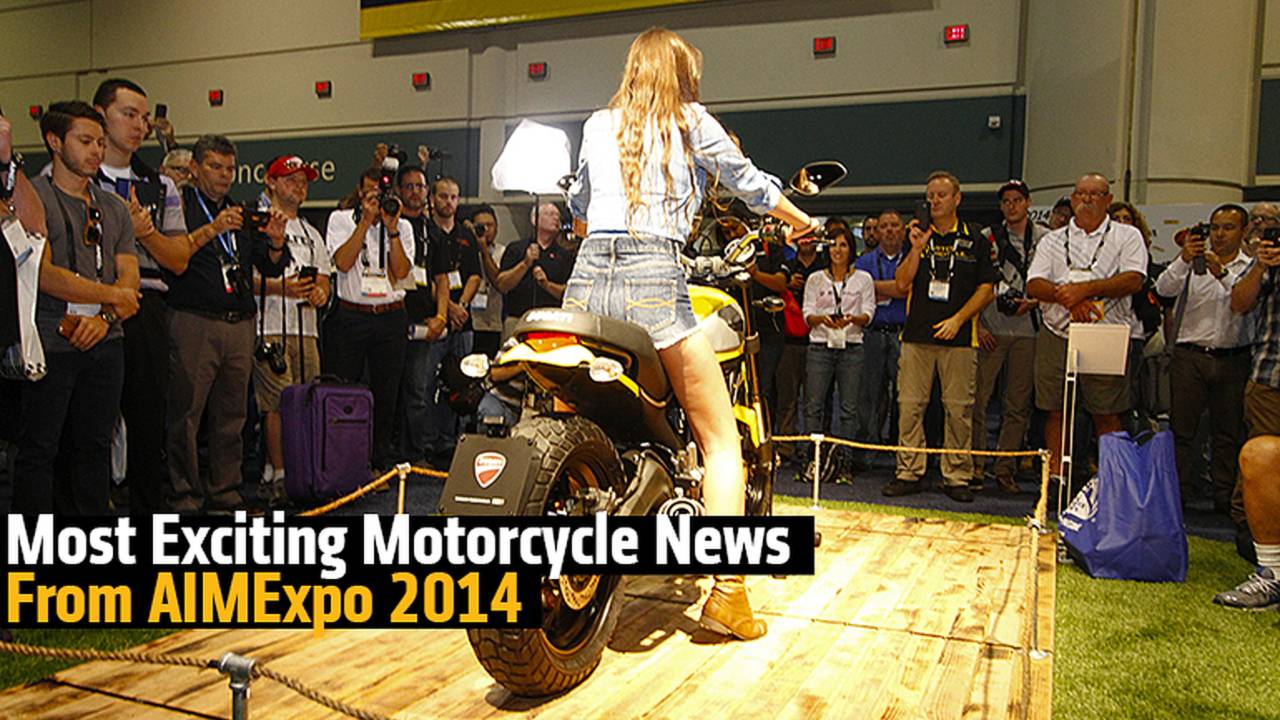 A wrap up of all the things we saw and didn't share from AIMExpo 2014.

This year motorcycling has made a ton of advances, from a 300hp non-street-legal super sportbike to the return of the Ducati Scrambler to new cool gear like the Skully AR-1.

The AIMExpo, held in Orlando, Florida, is a motorcycle trade show only in its second year. We saw a big list of cool things from gear to bikes and decided to condense our favorite items into one post. Here are our favorite things from the AIMExpo.

Bell jumped into the new genre of helmets that fall somewhere between off-roading adventure helmets and sportbike-style full faces. The Bell Helmets MX-9 Adventure full face can be arranged as either an off-road helmet with a beak, large open mouth, removable shield for goggles, or a traditional full face without the beck and a large, open swing-up visor.

Unbolt the beak off the top and there are two pop-in covers that snap into the threaded holes. The visor has a large opening which looks like it will give great visibility. The visor is vented as well so it’ll hopefully not be too cumbersome at high speeds.

In typical Bell fashion, there will be a huge assortment of visors and patterns, but currently we’ve only seen 6 colors schemes on display, with various tint visors.

Bell introduced the helmet at Intermot, but the first time it was shown in the US was at AIM. We’d love to check out the helmet in person, at $199, it’s a good price for the features, hopefully it’ll live up to the hype.

This is possibly our favorite thing from the AIM Expo. Little info is available about this Bluetooth, voice-activated camera, including the price - which we can assume will be high.

The Sena 10C is a 4.0 Bluetooth with 1080p HD capabilities that can do everything your Sena 20S can do (voice controls, Bluetooth communications between other brand comms, radio, etc.).

You can narrate the video through your communications, while still having all the normal capabilities of the 20S.

We can’t wait to check these out as they will make video motorcycle reviews a piece of cake. It isn’t official yet, but it will probably communicate with the Sena Prism cameras, which also have limited info available. They’ll be similar to a GoPro or Replay camera, but with Sena’s proprietary cases and mounts.

It’ll also be great for those click-bait videographers that make videos like “Kawasaki H2 Top Speed” or “Running from the Cops”  - you know, videos that don't actually show any of those things, but instead just depict a guy riding to work narrating an editorial video of that topic. How do people watch those? They get crazy high views and great comments?!? I guess I can’t go on a rant about those, since it would then be you reading a rant about not watching rants... ok, I’m done.

There were no new models from Zero, but rather a step in the progression that will hopefully lead to Zero Motorcycles being common place in motorcycling, without the excuses of range and price. “Refine and improve the areas that are the weakest,” said Scott at Zero.

Thanks to a Special Forces contract, Zero Motorcycles has reconfigured their battery chemistry to slightly increase the range, without taking away any power. We’ll have a more detailed report soon, but the important thing from this year are the signs of improvement that seem to indicate that Zero is on the right track.

Along with battery technology, Zero bikes have also upgraded to better brand brakes and suspension.

Intermot was filled with non-US products; in only its second year, we’re glad to see that AIMExpo featured at least two of the manufacturers giving us the good stuff.

The Yamaha R3 has made big news and bigger excitement around the offices as every writer on staff wants to be the first to ride the new Yamaha R3. Click the link below to read the full details.

Think of the R3 as the R1’s baby brother, with similar chassis structure, but with a much smaller wheelbase and of course a smaller engine.

Now there's a fun race between KTM’s 390, Honda’s CBR300R, and Kawasaki’s Ninja 300. Next summer will be the summer of the beginner bikes.

I’ve often written off the Vulcan line has being cheap knock-off Harleys. Yeah, that’s a rude way to look at it, but despite my past conceptions of the bikes, the all-new Vulcan 650 has potential of being a great cruiser for beginners or veterans alike.

Time will tell if this new bike will beat out the competition, as it's projected to be the lightest in its class. It’s definitely a newer conception that will produce characteristics unique to the Vulcan, compared to other bikes in its class like the Harley-Davidson Sportster and Yamaha Bolt.

The parallel-twin 650cc engine with its tight packaging (shocks mounted inward and exhaust under the bike) will hopefully make for a low-center-of-gravity, nimble motorcycle. The frame looks like it has racing potential (with probably more lean angle than any other cruiser) and it uses the same engine found in the Ninja 650, but tuned for some more down-low oomph and torque. Another bike that was unveiled on US soil at the AIM expo, we’re excited to ride it soon.

American Debut of the Ducati Scrambler

“Do you guys have any new news or versions of the Ducati being shown here at AIM?” “No,” said a Ducati rep. “Are there any designers or engineers we can talk to here?” “No.” But! We still weren’t disappointed. Just seeing this thing in person is joy enough, even if that’s all we get.

“This takes everything that’s compelling about the brand and makes it accessible,” said a Ducati rep during the unveiling. “Thinking outside the box and not taking ourselves too seriously.” We’ve been excited about this bike from Ducati, who said it’s not exactly a “throw-back” in PR speak, but rather an updated version of the Scrambler. If they never stopped building it, it would look like this today.

Our good friend Nathan from Ducati rode the very first one on US soil to the On Any Sunday, The Next Chapter premiere the other night. He said, they had only just unboxed and bolted the bike together. “It’s done everything I’ve expected it to do. It’s a sheer blast,” said our friend with a big grin on his face. We’re jealous.

Torc helmets is a line of helmets whose parent company makes helmets for muliple different lines and many major manufacturers, who they’re not allowed to talk about.

They believe that by purchasing through them cuts out the middle man on certain helmets. Some styles are exclusive to other brands and some are exclusive to them. Construction and quality of materials also greatly changes.

What caught our eye was their new line of helmets that have Bluetooth built-in, like the Torc Avenger. They have their own brand called Blinc Bluetooth. The communicators can play AM/FM, or music from your phone as well as pair to anther device. But, the capabilities are limited and primarily designed for communicating with a passenger, not a large group of guys.

We’d been rooting for the guys at Motoped as they’d been using crowd-sourcing for some time now. Motoped took a badass down-hill bicycle and strapped a small-cc engine mounted on it, producing an awesome hybrid. Started in a small garage with a couple guys, the California-based company has now been sold to a much bigger outfit.

Now, those guys have jobs at the larger company that has more resources and more dough, which could be good or bad for Motopeds (we’re hoping for the former). We’re still anxiously awaiting a review of any of the bikes, but the new company introduced a few cool complete bikes, that have us itching for more of these weird, fun bikes.