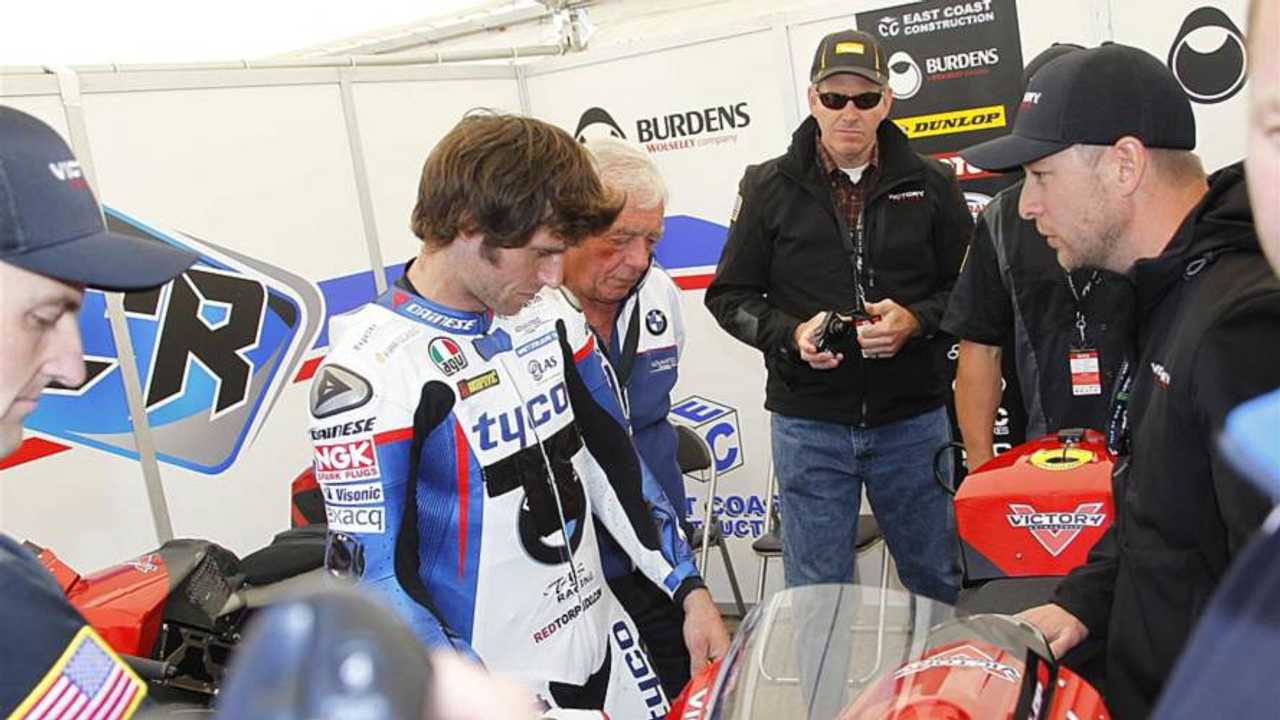 Victory Racing’s Lee Johnston, fresh off his first Isle of Man TT podium finish in the Superstock race, took his Victory Racing e-bike to a 110.97mph average lap that included a 144.9mph top speed through the Sulby speed trap.  It happened in the third and final practice for the SES TT Zero race today ahead of the race on Wednesday.

The Victory electric prototype is powered by Brammo battery modules and supported by Parker Racing, the makers of the electric motor that drives the bike.

Johnston said of breaking the 110mph mark for the first time: “It feels good yeah, I’m still just getting used to the bike, feeling a bit more flowing and trying to think about saving the power rather than rolling it on and off. Yeah it feels really good.”

Guy Martin, new to the team since yesterday’s injury to William Dunlop was analytical after his second ride on the bike, saying, “Interesting, interesting… yeah, it’s just…it’s just getting your head round what it’s doing. Just the momentum I think…just keeping the momentum up, don’t waste energy by braking late, or by braking at all, don’t even look at the brake lever, just roll off and let the regeneration do the work.”

Dunlop suffering a broken rib and bruises in a crash at Laurel Bank in Monday morning’s Superstock practice lap taking him out of the rest of the week’s competition.  That set the stage for his Tyco BMW teammate, Guy Martin to ride the Victory Racing electric motorcycle in Wednesday’s TT Zero race.

Gary Gray, Director Motorcycle Product for Victory Motorcycles said: “We came to the Isle of Man TT to prove ‘American Performance’ and we did that today by posting the two fastest qualifying laps of the day. Lee Johnston rode the fastest lap time ever for an American electric bike at the TT of 110mph and Guy Martin ran the second fastest time of the day at 108mph. We are extremely proud of American ingenuity and our Brammo Power and Parker Racing partners.”

Team Manager, Brian Wismann, said: “We set a goal and we achieved that goal, so that’s what we’re here to do, and to move the performance on, practice after practice. Right now, the smart move would be to play it safe and finish the race given that we reached our goal of 110mph, but hey we’re racers, so we’ll probably take a look at the data from today and see if we can go faster still tomorrow.”

More on Victory Motorcycles is available at www.victorymotorcycles.com and on Facebook at facebook.com/VictoryMotorcycles

Check out more about the Isle of Man TT at: at http://www.iomtt.com/TT-Info.aspx