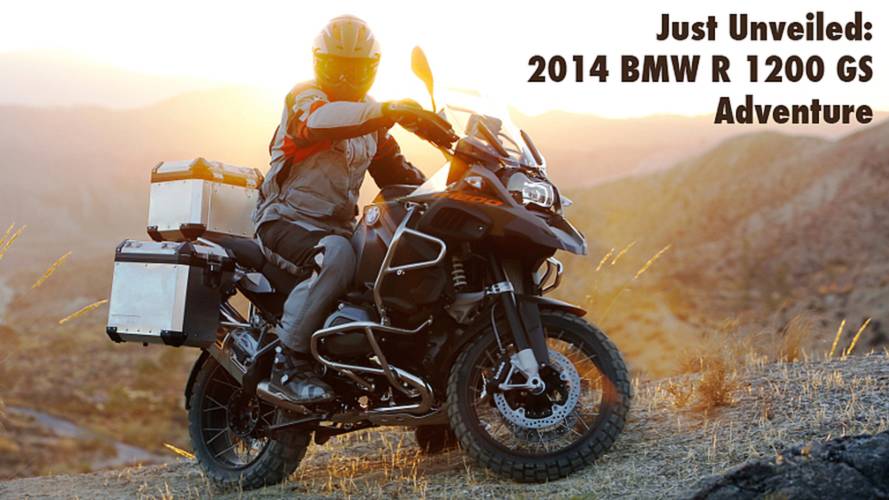 BMW has revealed the first photos and specs on the new 2014 R 1200 GS Adventure for miles of touring comfort and solid off-road chops featuring newly redesigned bodywork throughout. Consistently the top selling bike over 125cc in the U.K, the new 2014 Adventure offers improved aerodynamics and a weightier flywheel that maintains a class-leading 51 mpg via a 30 liter (7.9 gal) fuel tank. It’s 1170cc liquid/air-cooled Boxer twin engine makes 125 bhp and creates 92 lb.-ft. of torque.

The newly engineered trailing arm allows for sharper handling, while reduced vibration dampers increase ride quality. BMW has also given the R 1200 GS Adventure an increase of 20mm in spring-travel both front and rear that contribute to an extra 10mm of ground clearance to help tackle whatever nature throws at you.

Debut features on the R 1200 GS Adventure are switchable ABS, traction control and both Road and Rain modes that come as standard. Buyers can also select BMW’s Dynamic ESA semi-active suspension system as an upgrade while enjoying the taller screen, wider bench seat and new endurance footrests that are all adjustable and standard. Pricing for the 2014 BMW R 1200 GS Adventure will be announced on November 26, 2013 with a wide range of options available.

What do you think of the new bodywork on the 2014 R 1200 GS Adventure? Tell us in the comments below.