Robocop, the perfect mesh of man and machine, is a cyborg police officer from the future. Before he was Robocop, he was Alex Murphy, a Detroit police officer who was gunned down in the line of duty. Resurrected into a cyborg human from Omnicorp robotic technology, Robocop returns to the streets of Detroit to fight crime. Robocop is being rebooted for 2014 and this time he rides a badass police sportsbike replete in black.

The original Robocop movies details his stories about stopping crime in Detroit and discovering the root of corruption exists in Omnicorp. The 2014 reboot has the same story, but with an all-new Robocop and probably fancier special effects. Now completely dressed in black with futuristic looking body armor, Robocop patrols the streets of Detroit once again. 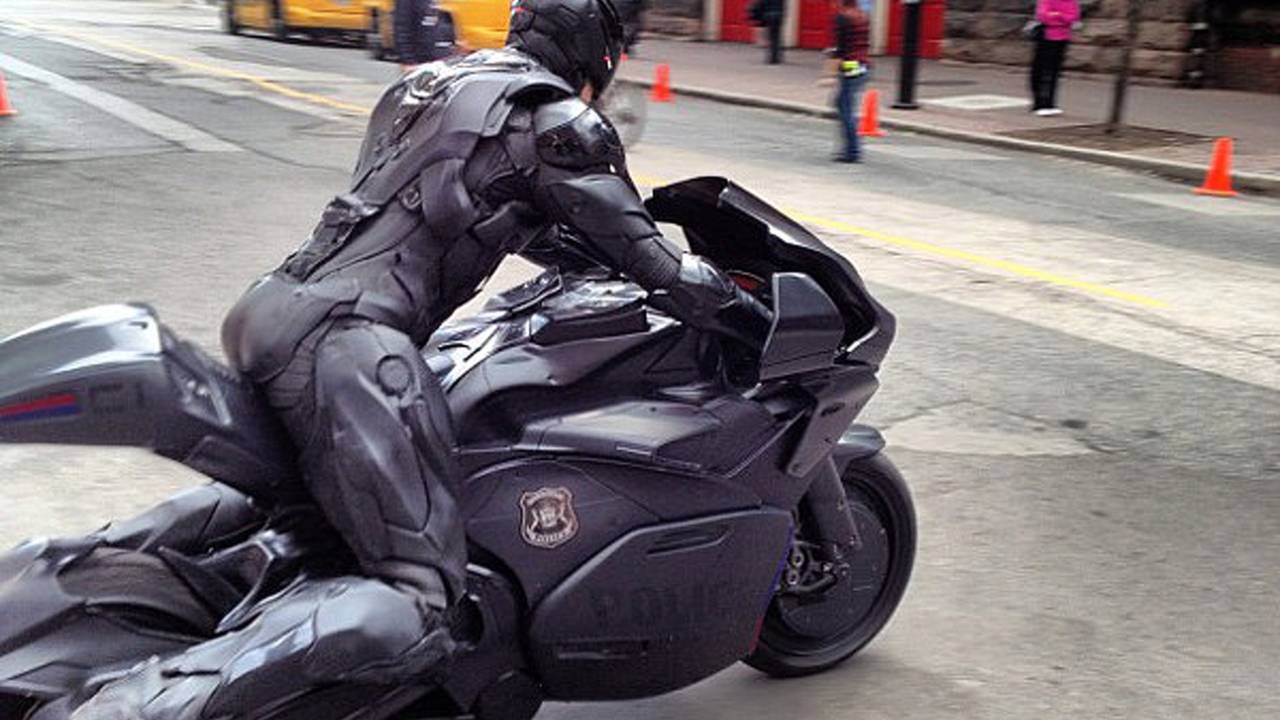 Robocop on the bike.

In the production stills released to the press, looking at the front brakes and the front forks we can see this motorcycle is a recent Kawasaki Z1000. Customized to look like an futuristic police interceptor, the fairings have been redesigned to give an aggressive look that matches Robocop's armor as well. The tail seat section of the motorcycle looks like something off a modern jet fighter. The riding pegs have been relocated to end of the swing arm, it must be interesting riding a motorcycle in that position. The lights on this bike have been redesigned to give a more of a police look, I can bet that they flash just like patrol cars of today. That's as much as we can gather from the production stills.

Robocop on his bike.

Robocop, the ultimate cop of tomorrow, an efficient killing machine. After being resurrected into a cyborg through Omnicorp's robotic technology, he becomes more machine than man. Eventually he begins to remember his memories and becomes Alex Murphy once again.

Sadly, we haven't seen much of the motorcycle in action aside the productions stills. A trailer detailing what the motorcycle can do should be released soon considering the movie is due in less than a year.

A beefed up sport bike that will be used in high speed chases to catch bad guys? That's completely believable. The Kawasaki Z1000 is a great choice for a police bike, its 1043 cc engine outputs 136.1 horsepower with 81 foot pounds of torque and weighs in at 480 pounds. With those kinds of specs, you have an agile and fast motorcycle that could quickly overtake and stop the bad guys without much effort. Give Robocop one of these and you won't have a problem with high speed chases ever again. My only concern is that Robocop may have a little bit of trouble getting off and on the motorcycle with the rear pegs set so far back. And we sure hope he's got a cyborg spine, otherwise that riding position is going to cause some major back problems.

By: Daniel Silverman
++
Got a tip for us? Email: tips@rideapart.com