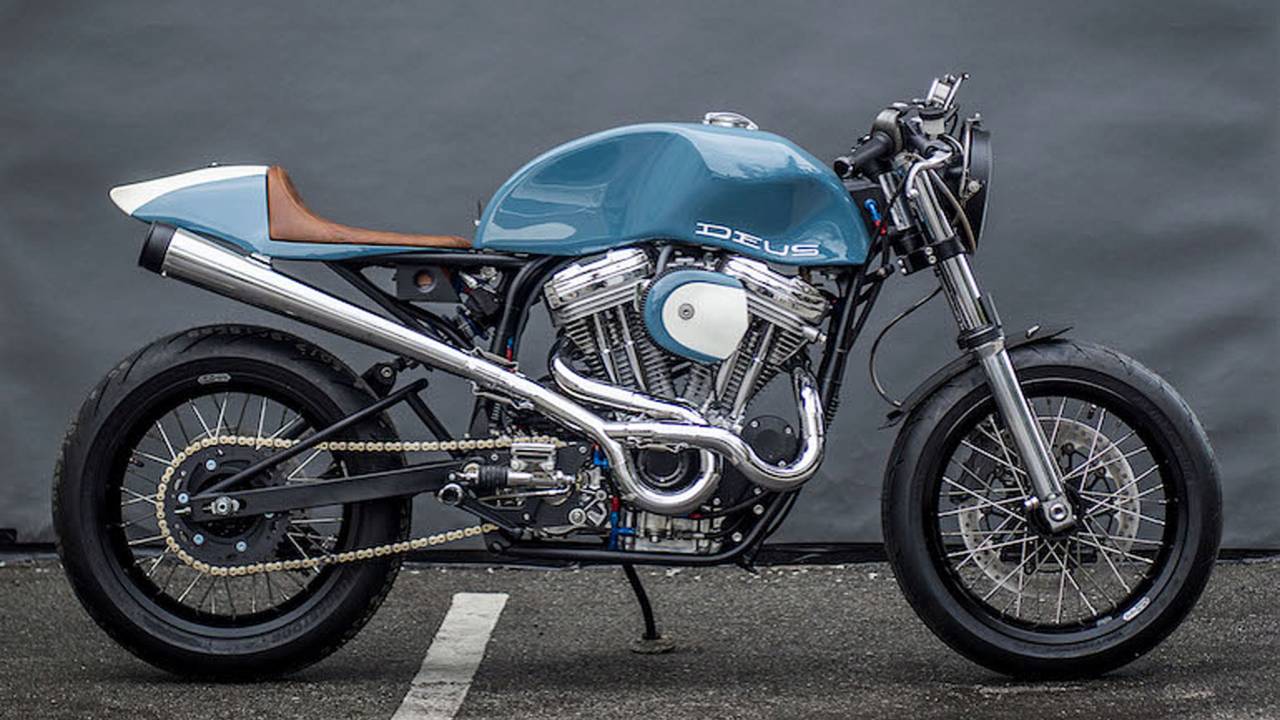 For this week's bike of the week we've gone with a truly epic V-Twin powered cafe build from one of the finest custom shops on the planet.

Deus Ex Machina Customs makes some of the coolest one-off machines on two-wheels. With multiple builders scattered across the globe, the company's bikes come in a wide variety of flavors. Anything that rolls out of its shops is pretty epic and this week's Bike Of The Week encapsulates exactly what makes Deus bikes so coveted.

As the Virago cafe racer that Jason posted Thursday demonstrated, V-twin-powered cafe builds can be seriously cool. This is especially true when someone like ace builder Michael Woolaway is at the helm.

Starting with a lightly massaged 1998 Harley-Davidson Evolution (ie, Sportster) 1200cc engine, a custom chromoly frame was constructed that is much lighter than the stock frame and allows for a more aggressive riding position and race-oriented geometry. The setup enables better cornering while being stiff enough to handle the powerful engine. It was then powder coated by Safeway powder coating.

In addition to being fabricated to accommodate the rear Racetech shock, which was built by Jimmy Wood of the Moto Station, the chassis boasts an internal dual oil feed system. Further ensuring the performance capabilities of this custom is a modern Yamaha R6 fork that has also been rebuilt by Jimmy Wood. Brembo brakes with a Magura master cylinder give the Bel Air top of the line stopping power. Reviewing the parts and specs on this bike makes it increasingly clear that Deus is building the best bikes it can in every department: looks, speed, handling, etc.

The entire bike is fired up via a Daytona Twin Tec ignition system and has been fitted with Motogadget instrumentation throughout. The Bel Air sits atop Rad Engineering hubs that have been laced to Buchanan Sun spokes and rims wrapped in Bridgestone rubber. A beautiful two-into-one handmade stainless steel chrome plated exhaust system was crafted and mounted to the one-off two-wheeler which undeniably furthers the custom look of the machine.

The bodywork is a large part of what makes this bike shine, and also a major part of what separates it from the type of work ordinary professional builders are capable of. The handmade aluminum tank and tail cowl each took Woolie hundreds of hours to make but the results are beyond impressive. Not only are these metal masterpieces gorgeous in terms aesthetics but they allow for optimal function at the same time, with the knee dents in the tank being in just the right place. Finally, a custom carbon fiber fender was made and mounted, mixing a modern sporty feel with a classic American style.

There are myriad elements that collectively give this build its '50's Chevy flavor, specifically the finned seat cowl and tank, muscular American powerplant, and classic two-tone color. What's particularly cool about this bike is that almost anyone can appreciate it, regardless of what genre of biker you fall into. The level of perfectionism and attention to detail on this build (and all Deus builds for that matter) are unrivaled. You don't have to know anything about motorcycles or building to understand this machine was created by a master-builder.

Deus arguably builds the finest customs in North America so it's not too surprising to find out its list of clients includes actors like Orlando Bloom and Ryan Reynolds, and singers like Billy Joel, Bruce Springsteen, and Jason Mraz. These machines cost tens of thousands of dollars; a normal Deus-built machine wears a price tag of up to US $80,000.

Woolie routinely will spend 400-500 hours masterfully handcrafting one-off tanks, often out of more than a dozen separate pieces of metal. With Michael Woolaway being objectively one of the most talented builders on the planet, his services don't come cheap. But go look at the Deus-built Ago TT and tell me that's not worth every penny of its price tag. Fact is, many of Woolie's creations are made at a loss.

Luckily for us, Deus Ex Machina is also a wildly successful clothing and lifestyle brand that generates hundreds of millions of dollars selling expensive clothes, with jeans and hoodies costing upward of $200. (I'll admit I own some Deus clothing, but only because eBay exists). With swanky storefront clothing locations in Milan and Tokyo, it doesn't appear Deus' gravy train will be slowing anytime soon, which means our future has more Woolie-made motorcycles in it to clamor and drool over.

To learn more about the Bel Air 1200 you can check out its page HERE on Deus' website.

Have you come across a particularly epic bike that you thinks deserves to be RideApart's next Bike Of The Week? Email us at info@rideapart.com