Shed-Built Virago Cafe Racer is a Vision in Green 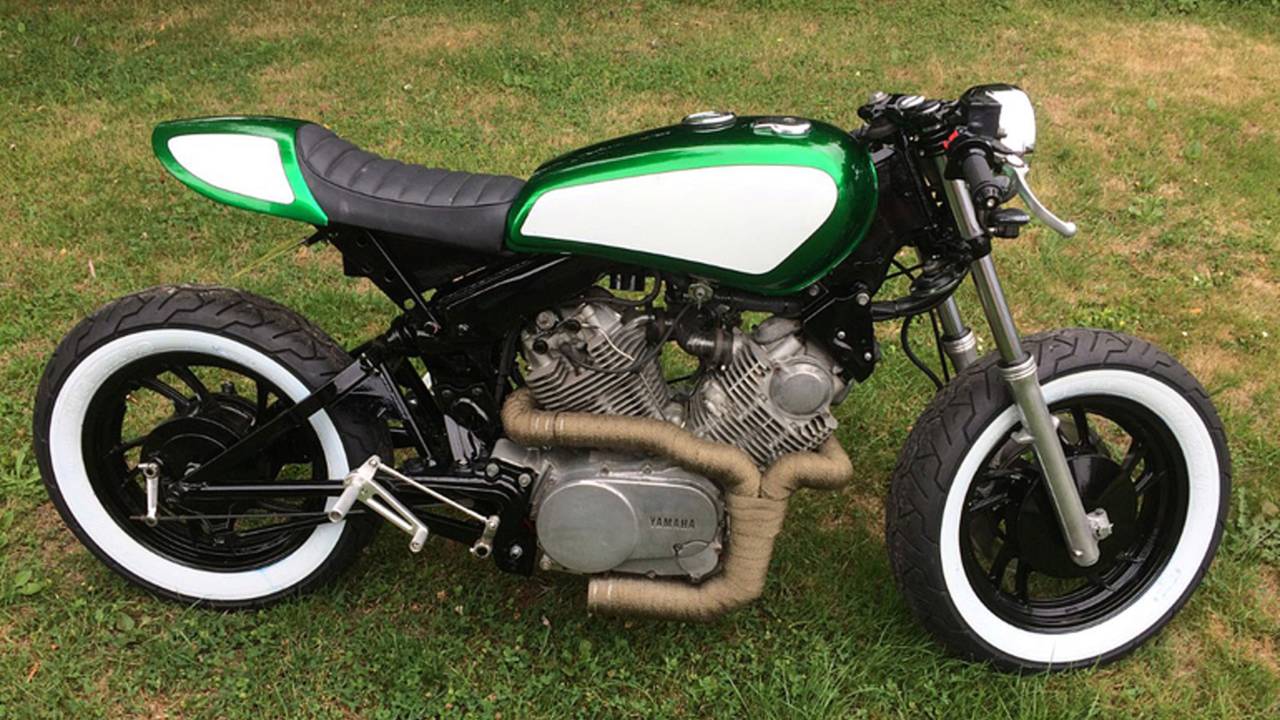 An English gearhead took an abandoned '82 Yamaha Virago and turned it into a gorgeous green cafe racer.

Shed-built Virago Cafe Racer is a Vision in Green

The garden shed is a sacred place of creation and contemplation for many Englishmen. It's a refuge where a tinkerer can sit down with a cold beer and create magic with tools, torches, a bit of scrap, and a dream. As proof, I present to you this killer cafe racer built in a British shed out of an abandoned Yamaha Virago.

This mean green machine is the brainchild of James Elwell, a gearhead from the West Midlands city of Worcester. A while back, Elwell discovered a bone-stock '82 Virago abandoned in a relative's shed, which he quickly transferred to his own shed in preparation for building his very own custom bike.

“It started out as a standard 1982 XV that I bought from a family member who had it in his shed for the last 15 years.” Elwell said. “I stripped the bike down to the bare frame which I then painted gloss black and then started building it back up.”

He did a good job of it too. He tossed out the bulky side covers, the front and rear fenders, the seat, and just about every other piece of body work besides the tank. He threw on a custom subframe with a cafe-racer seat and an aluminum tail section that he built himself to house the bike's relocated battery and most of its electronics. The stock tank and tail were sprayed a deep metallic green with cream-colored panels, the exhaust was replaced by a custom two-into-one system with integral baffles, and the stock airbox was removed in favor of a custom-built manifold with a trumpet stack. A stock Virago rear wheel was adapted to replace the bike's 19" front wheel to give the machine a more level stance, and it rolls on beefy whitewall tires.

Along with the cosmetic changes, Elwell radically altered the old Virago's controls and riding position. Clipons and some custom rearsets change the bike's stock cruiserlike position into a more aggressive cafe style. In addition, all the controls, idiot lights, and instruments were either deleted or relocated to keep a clean, minimal look.

“I wanted to keep the top yoke area as clean as possible so I have done away with all the clocks and warning light and just fitted a single speedo in to the centre of the fuel tank. There’s also a push button starter fabricated into the top yoke too,” said Elwell.

Being the huge Yamaha homer that I am, and a fan of minimalistic bikes with lots of clever details, this thing pushes all my buttons. Way back when I started riding I considered buying this generation Virago before I decided on the 850 triple. Looking at this bike has me poking around Cycletrader and Craigslist now looking for my own abandoned, OG Virago so that I, too, can build a killer custom.