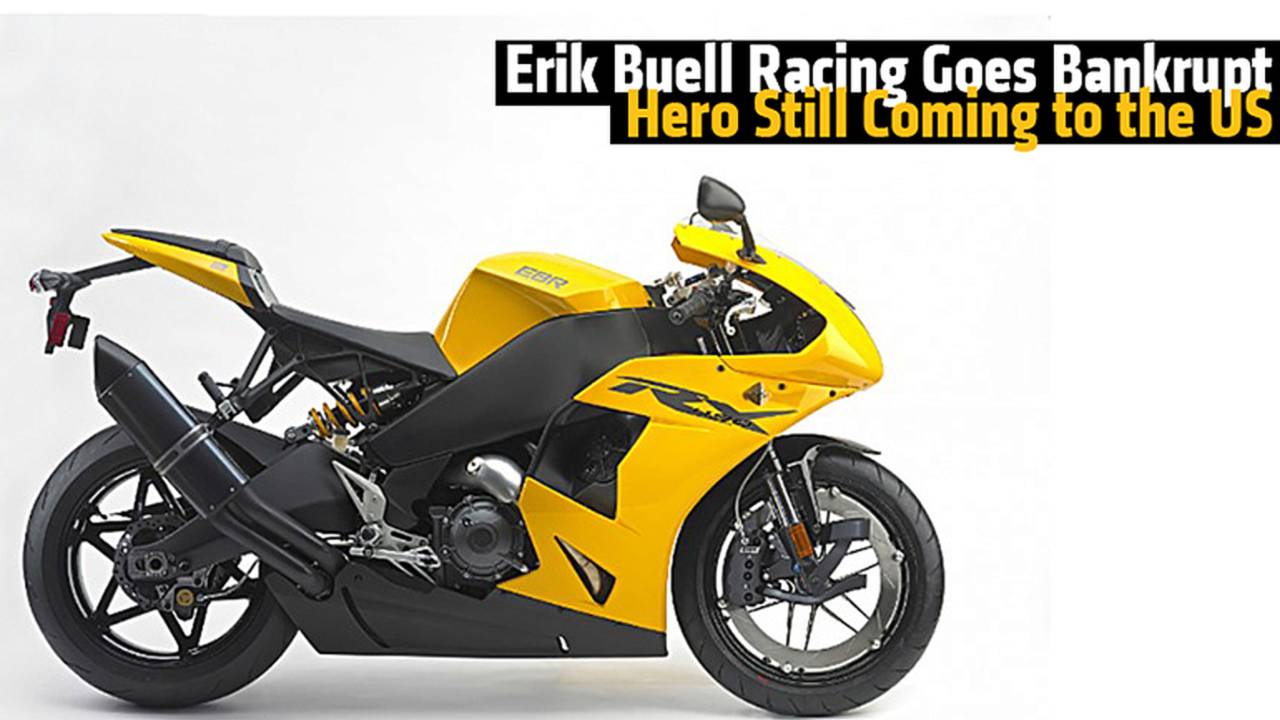 The news of Erik Buell Racing’s demise (again) came at a surprise, but when I thought back on an interview we conducted earlier this year, things started to make sense... Actually, it began to confuse us even more. It seems as though there’s a piece of the puzzle missing with this news story.

In case you didn’t already know, Erik Buell Racing filed for bankruptcy on Monday, April 13th, 2015. EBR opened up shop in 2009 after Harley-Davidson dismantled Buell. Erik was determined to keep making bikes, with his heart set on producing a badass American sportbike—the only of its kind. So he created EBR in the same building as Buell and simply kept going after H-D left.

EBR kicked out their first street production bike, the 1190RS, for the 2014 model year and the naked version, the 1190SX, followed shortly after. The sportbike was lacking in sales, but the naked seemed to give dealers new hope... if only slightly.

Hero Motor Corp, the Indian company that’s known as the world’s largest motorcycle manufacturer, became involved with EBR back in 2011, investing in the company a couple years later. The two had big plans on the consumer market while simultaneously starting the Hero/EBR World Superbike team. Luckily, the team will continue to race this season despite the EBR bankruptcy.

Why It May Be Hero’s Fault

In 2011, EBR started contract engineering and consulting work for Hero Motor Corp, developing small-cc sportbikes.  This arrangment turned out to be a lucrative arrangement for EBR. The first bike introduced was the HX250R, which was postponed after its unveiling. Recent reports say the bike will go on sale this summer.

Two years later, in July 2013, Hero Motor Corp purchased a 49.2 percent stake in the company for $25 million. In October of the same year, it was announced that EBR would be carrying Hero Motorcycles in the US, beginning summer 2014. Most motorcycle publications made this announcement, but as of early 2015, we noticed there were no updates.

Earlier this year we reached out to EBR to fact check a story about Hero’s marketing efforts in the US. We thought this new short-lived ad campaign was Hero hinting that it would target North American sales very soon.

We also reached out to several EBR dealerships, none of which had any word of selling Hero motorcycles. The official word from EBR was there weren’t any Hero motorcycles being distributed in the US by EBR just yet. They had big news coming with the Hero/EBR relationship, but nothing they would comfortably say on record. They hinted at it being important for the company, but released no major details over the phone. This is the important part to pay attention to: Is Hero Motor Corp to blame for the lack of EBR funding?

According to the most recent accounts, EBR is in a 20 million dollars hole, which doesn’t help determine where the funding is actually lacking as Hero invested 25 million for 49 percent. This meant that EBR was worth 50 million at the time of investment two years ago. It would probably be safe to say that there were some growing pains and the company is worth a little less now meaning Hero could have 20 million worth in the company at half of its value. So, it's possible Hero, all of EBR's other combined investments, or simply bad management (and costs totaling over their investments) are to blame, but Erik only hints at where the money is missing:

"The turn we recently took, after we thought we were moving forward, was unexpected," Erik Buell said in a statement according to Cycle World. "We thought we had secured funding, but in the end, we were not able to get the funding in place. Therefore we need to do the best we can under the circumstances for all parties in interest."

Erik Buell himself invested a major chunk of the upfront money in EBR, so it’s possible that he’s taped out and the extra “funding that fell through” came from a hope of a bigger deal. Maybe EBR was hoping Hero would double its investments?

Hero took a hit in sales for the 2012-2013 period and only had a 2.8 percent growth in sales for 2013-2014. The investment into EBR was the first time Hero made any such investment in an overseas company. Portrayed as a engineering investment to its investors, it was a major step for the Indian company to finally reach the US market.

Erik Buell is like Indian motorcycles—through many failed, great and bad reincarnations, it never seemed to fully die. The bankruptcy filed in Wisconsin is Chapter 128, referred to as an “alternative to bankruptcy.” Is it possible that Erik has something up his sleeve? It seems premature, even despite poor sales figures that the company would completely throw in the towel now, but it’s possible. It’s also possible that EBR will return after this restructuring.

MUST READ: Erik Buell Racing - The Past, Present and Future | RideApart

Monday after a board room meeting, all 126 employees were sent home from EBR. The website no longer works and we were unable to reach any of our contacts there. Right now, the company is in the hands of a lawyer who will auction off EBR for 20 million. If there are no bids, then the property of the company will be sold off until the amount owed can be assembled. Only time will tell, but as much as we’d love to see this talented engineer back at work, we’re not holding our breath waiting.

"To say this setback is a disappointment does not begin to express what I feel right now. I am personally grateful for the support of our outstanding workers, customers and vendors. While this is a sad ending, I personally hope for a new and better beginning," Buell said in a statement.

As of this morning, we received more information about Hero. Thursday, Hero's stock fell 2.8 percent and according to the India Times's website, the company said they will be using its own in house R&D facilities to replace EBR.

Hero also told the India Times that it's still coming to the US. "The executive cited earlier said its US plans were on track. "In due course of time, we will have to take a call whether we wish to identify new distributors or we would go on our own," he said. Hero is looking to enter North America towards the end of 2016."