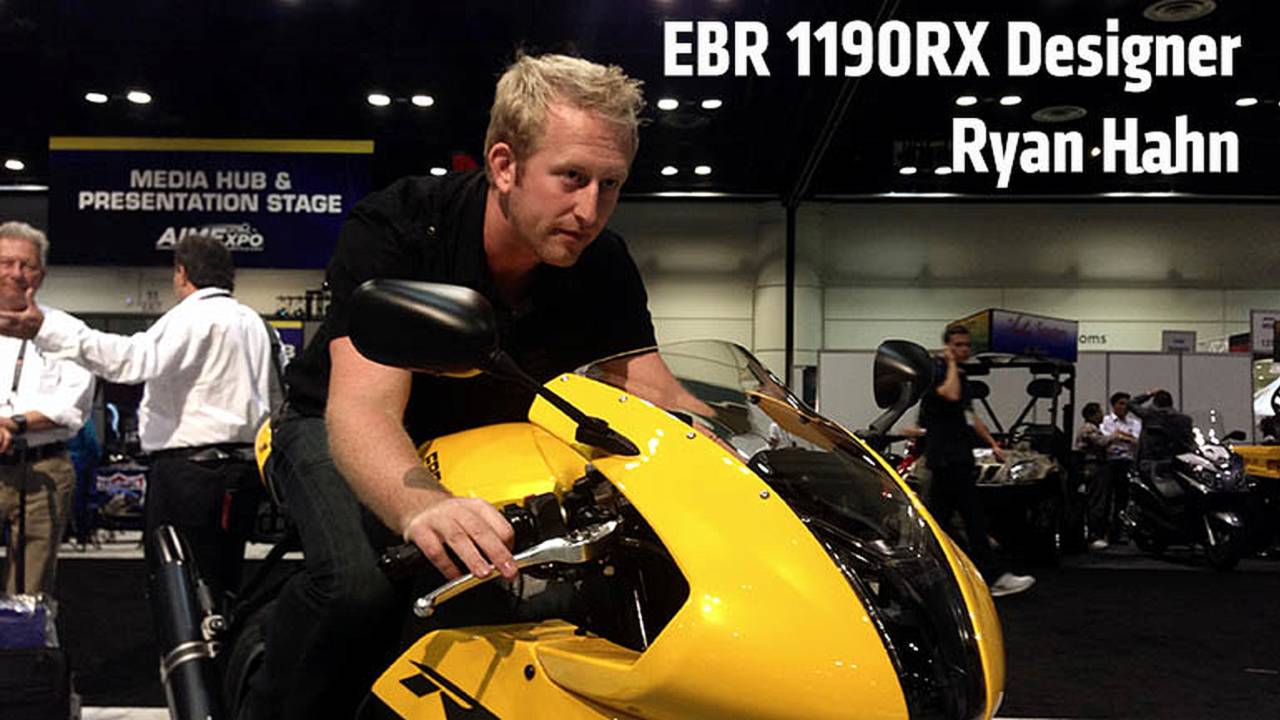 An interview with EBR 1190RX Designer Ryan Hahn. Find out how the new EBR motorcycle design came to be.

Shortly after the bike’s AIMExpo unveiling, we spent a few minutes talking to EBR 1190RX designer Ryan Hahn. Here’s what he had to say about America’s new superbike.

RideApart: Where were you before EBR?

Ryan Hahn: “I worked for Buell before,” says Hahn. “When the company shut down I designed road bicycles for Trek. That was a great experience — two wheels still — but a different approach.”

RA: What did you work on at Buell?

RH: “I came into Buell right after the 1125CR , so the Barracuda 2 was a pretty awesome product to work on.

RA: So the design for the 1190RX was basically already done?

RH: Kinda, yeah. We had the approach; we had the direction with the RS. So, looking at the tech bits that we needed to develop, the headlight was a huge one, the instrument cluster was big — that’s what customers really want. was on our wish list when we first started, then we went through the development and it was like, ‘Is this really going to happen?’ And it did! We started the communication with the suppliers and things just kept rolling. It was a little more added cost, but we made the decision in order to make the product a home run. I think it’s an awesome package. “

RH: “I think the whole rider interface is incredible. The upper triple is gorgeous, the damper is great, the front fairing bracket is really, really cool. It’s stamped and formed aluminum, welded together.”

RA: Can you describe what you were going for with the look?

RH: “I think the Japanese really have their image. Same with the European offerings. We pretty much had to look at it and do something to set ourselves apart. We don’t want to be alien, but we want it to be gorgeous and really say something. Hopefully, someday this will viewed as the American sportbike look. It’s subtle, it’s confident, there’s not a lot of unnecessary details. We do have incredible proportions in the way the tank interacts with the front and the tail. As well as the visual mass over the front wheel.”

RH: "We have a great team in East Troy, a bunch of people that really are are at the top of their game and they bring amazing things to the table. Every day I'm lucky to work with them. We also have a great group of suppliers and partners that execute and deliver, no matter the condition or timeline. The only way we are able to make a product like the 1190RX as good as what it is, is with everyone working hard and pouring all of their passion and talent into it."

RA: Tell us about the LED headlights. Which Cree model are they?

RH: “It’s a light engine that they sell for headlights with multiple LED dies mounted on a ceramic substrate, it’s something they do specifically for headlights. So, in terms of which LED they’re using, they don’t tell us.”

“Actually, something interesting on that is we had a lot of good reception on the RS’s stacked round headlights — they’re functional — so originally when we started with this, we thought we’d try and go with that look. We were working with a great supplier on it, but it felt a bit forced. We were getting good light output from the round design, but what the technology really needed was this rectangle reflector that we got. It’s really well-dispersed, it’s bright, the low beam is wild, the high beam is even better. I think when you ride one you’ll be impressed.”