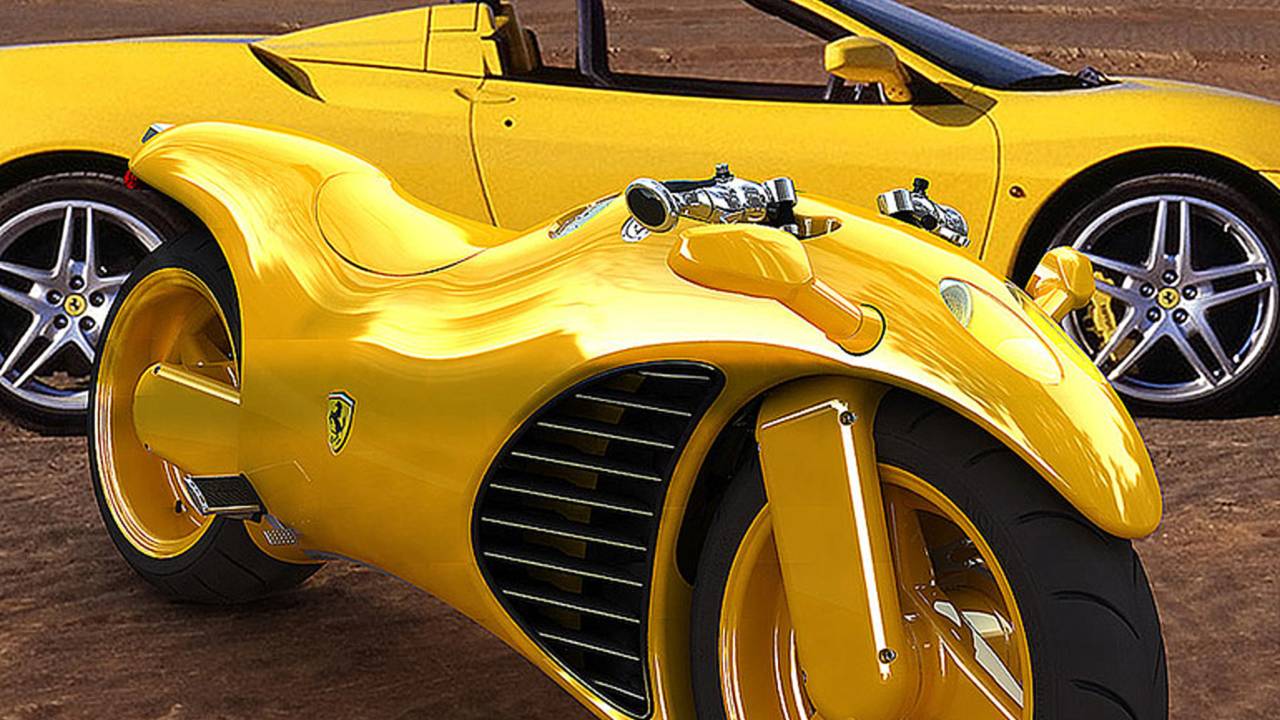 This is what happens when four wheels get really jealous of two wheels: Supercar-inspired Motorcycles.

Four wheels, two wheels, one wheel, or no wheels, all transportation on this planet is interconnected in one way or another. This was taken from that, these two machines both use such and such, those parts progressed into developing these other mechanical methods. For some people, there might be a bit of a line in the sand between motorcycles and cars, but at the base of it, they're both machines with wheels, engines, steering, and suspension that we use to travel the roads.

READ MORE: The Monster 1200R Is Ducati's Most Powerful Naked Bike Yet | RideApart

The C-01 is what happens when the guy who designed the Tron Lightcycles, Daniel Simon, builds a real road-registered motorcycle. The resulting 200-horsepower machine looks like it was just shot out of a .44 Magnum and is nothing short of stunning. The body, wrapped around that 1,195 cc KTM engine, was inspired by the legendary 1960s Lotus 49 F1 car, and is made up of a combination of carbon fiber and aluminum.

More a piece of carefully crafted art than a functional track conquerer, only 100 C-01s exist. And with exclusivity and grandeur like that comes a steep price, $137,000 to be exact. That's each. Naturally, people who couldn't afford something like that have replicated the shape and look with other motorcycles.

The Dodge Tomahawk is one of those pieces of work that, at a glance, makes you instantly appreciate all the maniacs on the planet. Then you hear it and feel like you might as well just drop down to one knee and propose to the creator on the spot. Debuted at the 2003 North American International Auto Show in Detroit, this four-wheeled pavement eater is powered by an 8.3-liter SRT10 engine that puts out 500 horsepower and 525 lb-ft of torque. Yes, that's a Viper motor in there, and Dodge was even bold enough to say that the concept had a 420 mph top speed, though it was never confirmed.

According to Forbes, Chrysler was prepared to build up to nine replicas of the bike as rolling sculptures, and one was even offered through the 2003 Nieman Marcus Christmas book for a menial $550,000. If you're really desperate for one, there was a Chinese company back in the day that was completely ripping off the design.

The name on the body might say Lamborghini, but this extremely rare motorcycle crossed borders (and oceans, for that matter) for parts and inspiration during its creation. The information on this bike is pretty scattered, and there are multiple versions of all the details, but there seem to be a few pieces everyone can agree on.

For one, a French engineer and moto racer named Claude Fior played a significant part, particularly in working on the frame and suspension. Second, underneath that unique body shape is the engine and transmission of a Kawasaki GPz1000RX, which actually doesn't look tremendously different. There are also reports that a 900 engine from a ZX was used sometime during the development as well.

As far as the body goes, that work was done by French firm Boxer Bike (now Boxer Design). Some sites say it's made out of plastic, some say fiberglass. It's also reported that the design pulls from the 25th Anniversary Lamborghini Countach, which would make sense considering the similar look of the side vents. In addition to the tank and windscreen being integrated into the bodywork, the rear cowl is removable to fit two people on the bike.

As far as how many were built, the numbers are all over the place. Some say only four to five. However, there are photos of a model with "No. 009" and No. 017" on them, which suggests otherwise. That has indicated to some that around 20 were built, while others go so far as to say 40 exist. Photos also prove the car was produced in at least three colors: yellow, purple, and red, some featuring various versions of the Lamborghini name and logo.

This bike is about as fresh as can be, just debuting this past month at the 2015 IAA International Motor Show in Frankfurt. It's a direct celebration of Mercedes-AMG's partnership with MV Agusta. Unlike the rest of these motorcycles, however, the F3 800 model bike you see was not designed and built from the ground up specifically to honor any AMGs. Rather, the two companies took the motorcycle and paired it with AMG's newest supercar, the 462-horsepower GT.

Really, the special edition is quite simple: the 798cc F3 was painted the same "AMG solarbeam" yellow, and a big old AMG label was slapped across its ribs. That's it, nothing more, nothing less. But the Agusta F3 looks good in just about any scheme, and this vibrant hue is no different. The photos also make for great social media/phone/desktop backgrounds, if you're into that sorta thing.

READ MORE: The 10 Sexiest Motorcycles of the Decade | RideApart

The lead photo up top is the full bike, and the one directly above is what it looks like stripped down, baring all. The V4 Concept is not directly tied with Ferrari, but it certainly presents an interesting take on what a superbike could look like. That is, if you like motorcycles that look like eels. Under that slippery gloss plastic casing, designed by Israeli artist Amir Glinik, is an imagined V4 engine that would come from the legendary Ferrari V12s. The concept would also feature ride-by-wire, adjustable suspension height, two damping settings, and a weatherproof touchscreen.

This rendering by Russian artist Burov is purely imaginative what-if tomfoolery, but its futuristic cafe racer combo was too mouth-watering not to mention. If it feels familiar, that's because its aesthetics were heavily captured from the Lotus C-01 you just saw above. Though this isn't real, there's one positive thing to keep in mind: Christian von Koenigsegg is a mad genius, and nothing is completely out of the realm of possibility to that guy. Which brings us to this weekend's homework: Go write letters and emails and send carrier pigeons telling him to build a bike.