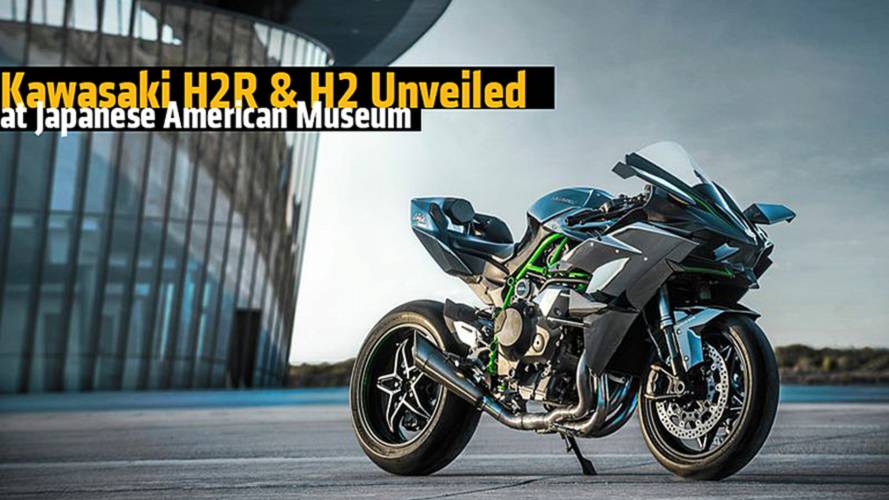 Kawasaki Motor Corp. USA teamed up with The ID Agency to bring both the 2015 Kawasaki H2 and H2R together for the first time in the United States.

Here's a piece of news Kawasaki hid at the EICMA show last week - the 2015 Kawasaki H2R will retail for $50,000 (which is spot-on with our estimate in the story: Clearing the Rumors). So far both the H2 and H2R have been unveiled overseas, but last Monday Kawasaki decided to bring the bikes here to the states for our first look at the H2 street model.

Kawasaki Motor Corp. USA teamed up with The ID Agency to show the American public the two bikes side by side for the first time. Held at a special dinner at the Japanese American History Museum in downtown Los Angeles, the bikes were presented to a variety of members of the media from a wide range of industries including motorcycling, lifestyle, automotive and even comedy. Long-time bike enthusiast Jay Leno was there, but he'd already seen the bikes…. that lucky son of a gun.

The event gave the audience the chance to finally inspect the ground-breaking machines up close with the street H2 version, the track-dedicated H2R weapon and a stripped-down rolling motor and chassis all side-by-side. Minor differences such as a single, functional ram air intake duct on the H2 as compared to both functional inlets on the H2R, slightly different clutch design and air/fuel map variances were pointed out, but both bikes looked to be real game-changers regardless.

As many are already well aware, the 2015 Kawasaki H2 is a revitalization of the H2 Mach IV model that Kawasaki released back in 1972. That bike took the market by storm with its wicked 750cc, 3-cylinder, 2-stroke motor producing nearly 100 horsepower available for the street.

The collaboration of all of these Kawasaki operating companies to create one ultimate product is represented by the “river mark” logo found on the nose of the bike. The bike also bares the iconic “Ninja” branding that has remained unchanged since the line was introduced over 30 years ago.

All of the specifications and details of the bike still have not been fully disclosed as the bike is technically still going through its final round of engineering changes before ramping up production. In fact, the bikes on display did not seem to be 100 percent complete. This was evident by the lack of hydraulic fluid in the Brembo clutch line or rear braking system, minor misalignment of the body work in areas and the fact that the bikes were not fired up for the audience.

However, the high-tensile steel trellis chassis (Kawasaki’s first, to allow flex from the massive amounts of power anticipated) was an impressive piece of engineering art under close inspection. Additionally, the supercharger is geared to spin at a rate of 9.2 times that of the engine (that’s 128,800 RPM when the engine is at 14,000 RPM) forcing 44 gallons of atmospheric air into the air box every second! These figures are tough to comprehend but these are just a few of the contributors towards the 300 horsepower output by the 524lb H2R model when the turbine blades are approaching supersonic speeds.

The lingering question of the night was when the H2 and H2R are going to be available to ride in order to truly evaluate this ground-breaking model. We were given a rough estimate of early 2015 (February or March) but a Kawasaki rep did hint at the suspicion that Rickey Gadson may already have a model in his possession to see what kind of quarter mile times are possible. We will definitely be throwing a leg over this monster the minute Kawasaki will allow it but at least for now, we have plenty of sexy teaser photography and video to gawk at and admire.

In order to use the action photos from the launch, Kawasaki asked us to print a disclaimer. We wanted to show them to you so here it is: "Please note that the models depicted in these photos may vary slightly from those used in final production models. Action photos must be accompanied by the following disclaimer: Professional rider under controlled conditions. Do not attempt to reproduce these scenes. Further, please ensure that the disclaimer is larger enough to be clearly visible."