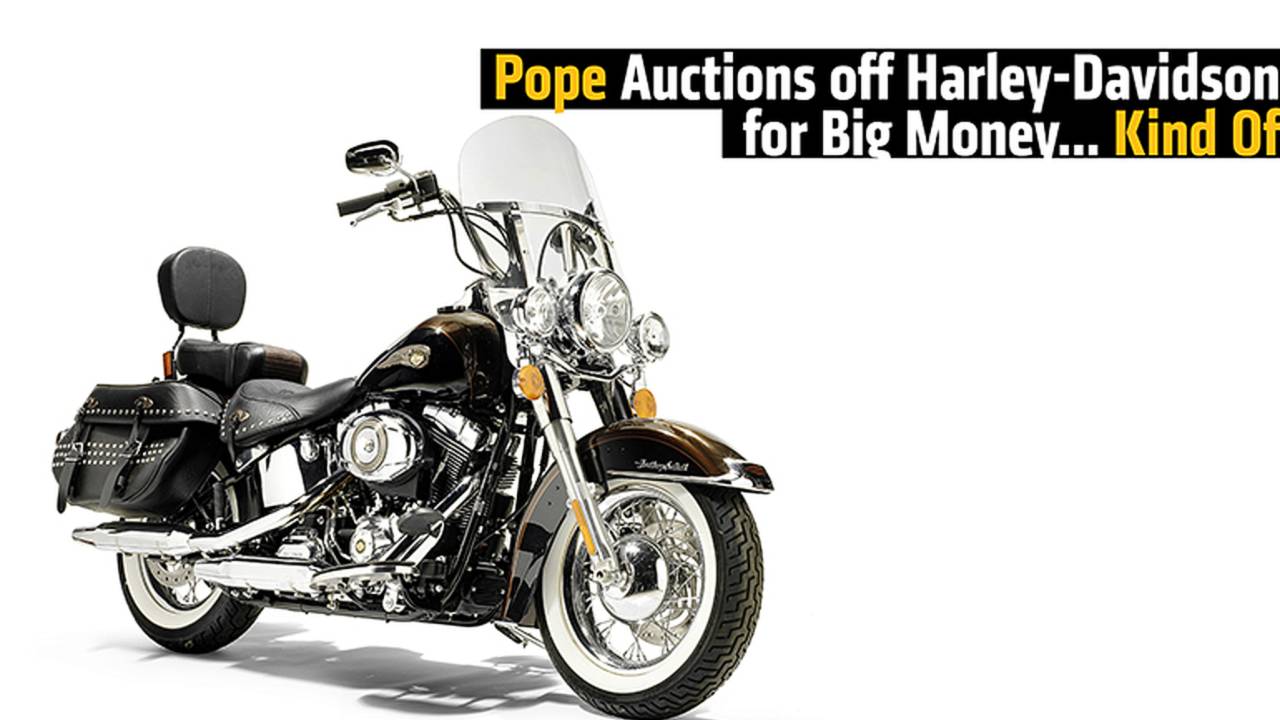 Pope Auctions off Harley-Davidson for Big Money… Kind Of For some reason, it's good to know that a couple of Roman Pontiffs are bikers at heart or at...

For some reason, it's good to know that a couple of Roman Pontiffs are bikers at heart or at least have a soft corner for motorcycles. Recently it was Pope Francis’ turn to be associated with the name of the legendary cruiser motorcycle, as a Harley-Davidson FLSTC 103ci Heritage Softail Classic bearing Pope Benedict XVI’s screen-printed signature went up for auction last Thursday at Bonhams auction house in Paris.

The cruiser was sold for €46,000 (US$ 51,865). All proceeds from the auction went to a non-profit, chariable organization called Stowarzyszenie Przyjazny Świat Dziecka (Friendly World Association) – an organization offers care and support to children and families in need.

Auctions of Harleys bearing papal signatures can’t exactly be termed as a new breed of event. Last year, a 2013 Harley-Davidson 1,585CC FXDC Dyna Super Glide Custom which was part of the papal fleet was auctioned off by Bonhams for a whopping 243,428 Euros.

Why the difference is prices you may wonder. Well, here is the backstory.

Harley Davidson had flown in two tanks to Vatican on its 110 Anniversary to get Pope Benedict to sign them. However, given his rather poor medical condition, Pope Benedict couldn’t sign the tanks. They were graciously returned to Harley Headquarters with screen-printed signatures. The tanks were installed on two bikes and one of them was flown back to Vatican while the other stayed in the Harley-Davidson Museum in Milwaukee.

The bike which returned to Vatican was the same Heritage Softail Classic which was auctioned off yesterday. But given Harley’s generous nature, they shipped it with a companion – a Dyna Super Glide Custom. Both bikes were added to the papal fleet. By that time, Pope Francis had been instated as the Roman Pontiff and the Dyna Super Glide Custom received the real signature of the new Pope.

Hence the Dyna fetched the juggernaut price when it went up for auction in 2014. Had Pope Benedict signed the Heritage Softail Classic, it would have easily fetched an equally unbelievable price.

Coming back to the recent sale, the buyer whose specific details are still in the dark, has been revealed to be a European collector who chose to make the bid by phone. However, on a rather interesting note, this is the same collector who bought the Dyna Super Glide back in 2014 for the astronomical price.