Dump That Pile: Why You Need a New Motorcycle 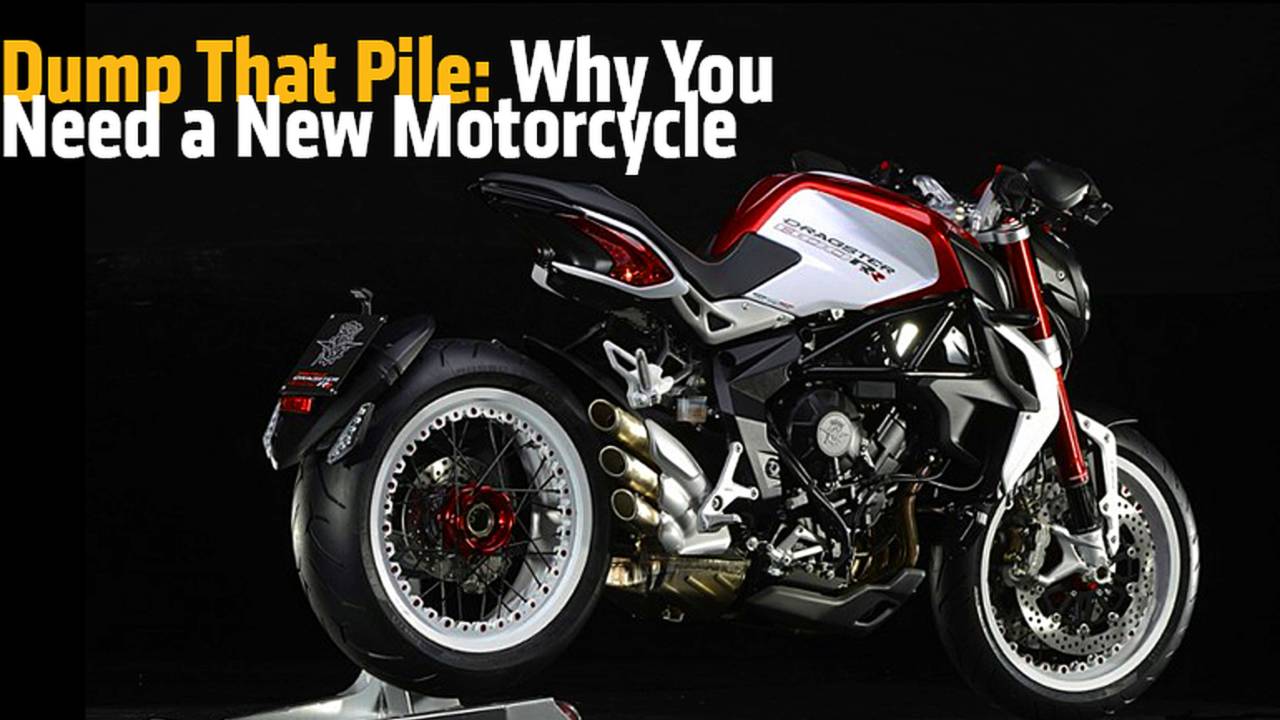 The holidays are fast approaching. Why not get yourself a new motorcycle?

Last week, you heard us extolling the virtues of holding onto your old bike. And you should. Maybe… So to follow up from that story, we have a point/counter-point as to why you might should dump the old bike and get a new one.

Have you seen these new bikes? They've got everything! They're fast, and light, and sleek, and so cool looking! They've got more computing power in the ABS and traction control systems alone than was found in the Apollo lunar module. They make more power than your old beater pickup truck, they're hotter than your girlfriend, and the sounds they make rival anything Mozart ever did.

READ MORE: Cheap'er to Keep Her - Why You Should Keep Your Old Bike

So in case you're still on the fence about replacing your old pile, allow us to enable you. Here are the best reasons you need to get yourself a shiny new bike!

Fuel injection, anti-lock brakes, traction control, switchable ride modes. Don't have them? Maybe you should. The newest generation of motorcycle electronic systems are as polished as they are prolific. Far from their rudimentary iterations of the past, they serve to enhance the ride, rather than take away from it. They can keep you out of trouble in tricky conditions, save your bacon when that oblivious driver pulls out in front of you, or just make the ride more enjoyable in general. You probably won't even notice they're working.

When's the last time you went for a ride without having to worry about the potential for a roadside repair? Are you spending more time with a wrench and a rag in your hands instead of a throttle? Maybe it's time to start enjoying the part of the sport that attracted you in the first place. You know - the riding part. Thanks to modern manufacturing and testing techniques, new motorcycles today are nearly as reliable as their four-wheeled counterparts, and often come with comprehensive warranties. You know, a warranty? When somebody else pays to fix it when it breaks? Sound pretty nice, doesn't it?

Your '86 Honkawayamazuki was fast in its day...but that day was before most of your friends were born. And let's face it, the old turd isn't running as well as it did last century, either. Its former roar is beginning to sound asthmatic, it has a random skip now and then, and you can smell hot oil when you start wringing its neck. Sure, it could be rebuilt, but then you'll have sunk a couple thousand bucks into a bike that's still older than your favorite pair of boxers, and half as attractive. Why not plunk that sort of coin down on a new ride, that already makes the power, looks better, weighs less, and doesn't have zip ties holding the bodywork together?

If your search for repair or upgrade parts looks less like a trip to the store or perusing a website, and more like an episode of American Pickers, it may be time for a new bike. There are few things more frustrating than your bike being parked for long periods of time, while you search the deep, dark corners of the world for some $5 widget that's been out of production since the Nixon administration. Or when you finally get the coin saved up to replace the rusty, rattly eBay pipe you've been suffering through for years with the exquisite, titanium and carbon fiber exhaust system of your dreams, only to find out they stopped making it, and the last ones sold out on clearance a month ago. You can teach yourself to tig weld, or you can just get a new bike.

Maybe you enjoyed that screaming sportbike when you were a 20-something college graduate, but now it hurts your knees just to sit on it. Maybe you've got a significant other begging you to take them out for a ride, but your old Ducati monoposto just won't play along. Maybe dirt holds an allure for you now that asphalt never did. You can't do the job without the right tool, which means it's time to get the bike that does what you want it to do, instead of trying to make your old bike do things outside its design envelope.

The bouncy bits on your current ride can be called suspension only in the broadest sense of the word. But the spongy, non-adjustable, feedback-deadened junk at either end of your old bike are a serious limiting factor in its safety and performance, and no amount of rebuilding or respringing is going to fix that. You know what will fix that? The fancy new parts that come on a brand new motorcycle! Even the more basic stock parts on motorcycles today are a quantum leap from the stuff that was out ten years ago. All that racing and development that's occurred since you first thumbed the starter on your old bike has trickled down to the street, and the result are bikes that handle astonishingly well, regardless of weight or style.

Have you totaled up what you've spent patching up your antiquated hulk over the past year or two? Does it hurt you deep inside to know you could've paid cash for a new bike with all that money? It's time to stop the bleeding. Whoever coined the phrase "throwing good money after bad" probably owned an old motorcycle. Sure, you don't want to make a payment on a new bike, but you're making payments on your old bike already. You're just paying them to parts companies and dealerships, instead of the bank.

As much as it pains you to say, maybe the thrill is just gone. Maybe you've done everything there is to do with the bike you have, and you're hungry for some new type of two-wheeled adventure. When you go out to your garage, instead of grinning like a kid with an ice cream cone, you've adopted the disaffected look of a teenager on a family vacation. That's just not okay, for you or the bike. Go get astride something that lights your fire again, and pass on your old bike to someone who will appreciate it the way you once did.

Of course, there is a third option, and we're all thinking it. Instead of a new bike to replace your old one, you could just get another bike...