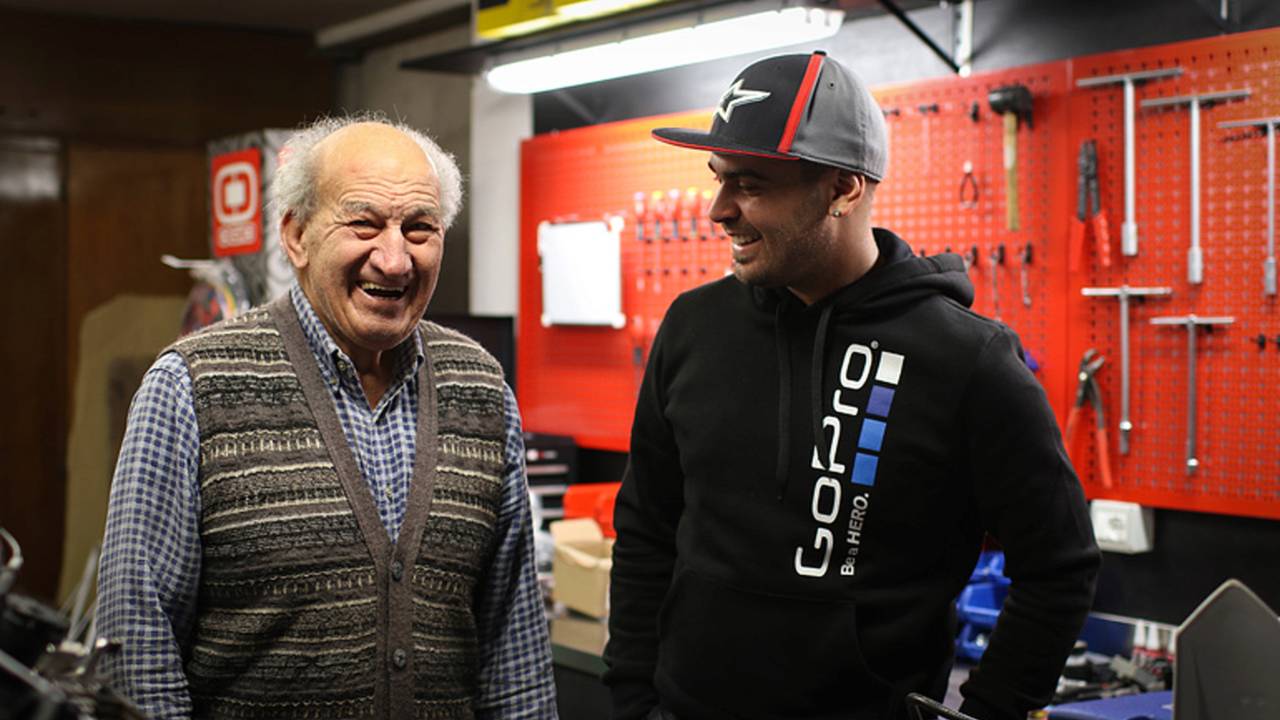 In this week's installment, Kyra shows us a different side of Manny and tells us a bunch of "Bill Brasky" stories about him.

Part Two – The Road to Dakar Is Paved with $ingles

Since the beginning, Manny has made a name for himself both on and off the course. Rumor of his intense focus, can-do attitude, sincerity, cunning and drive often precede him. Some of the more colorful stories involve piles of euros, off-color business deals, and ladies of the night. The day we met, while waiting for Manny to arrive in Sardegna, a friend leaned in towards the group offering a curious bit of information – I suspect so we wouldn’t be caught off guard.

We all had a good laugh, but I could tell some in the group weren’t quite sure what to believe, including myself. And though our friend was a little off on her deduction, it wasn’t too far from the truth. If the definition of a pimp (according to Google’s dictionary) is to “sell or promote (something) in an extravagant or persistent way” then that’s precisely what Manny is: a pimp.

What had led everyone to gossip was a rumor – which Manny is not shy about, by the way – about his ‘charity’ work with immigrants flocking to Italy. How he had met these people I have yet to find out, but per their request he had helped Eastern Bloc expats find jobs in Rome as exotic dancers. Seemingly one of the only professions they could acquire easily without residency, a firm grasp of the language, or any close local relationships. And to be fair, without citizenship, these women couldn’t lease apartments, have cellphone plans, or open bank accounts. So, being a charitable soul, Manny facilitated everything. There’s even a legend about his sweet old “Nonna” counting out stacks of euros to put away for safe keeping until the girls needed to make a withdrawal. Imagine that, a tiny, silver-haired Italian granny wearing a translucent green bookie’s visor, belly-up to her big wooden dining table, with a growing pile of money covering its surface. At least this is how I picture it.

“No matter who you are in the rally, you're stressed. You're pushing your limits. You're always going. It's a rush no matter how big or how small your roll. It's Dakar.” – Manny

Manny's Dakar career almost ended where it began. Shacked up at the time with his then fashion designer girlfriend, a 22-year-old Manny made the rash decision one night to register Dakar sans budget, bike, and even less of a plan. Racing was his only viable job, one which barely paid, so his lady friend agreed to loan him money for the entry fee believing it was only a mere 1,000€. In fact, it was 15,000€! But when the truth came out, he went with it – straight out the front door. Conveniently, he met a Romanian dancer through his ‘charity,’ who took him in with open arms. Though he’d managed to sort the rest of the entry fee, he was still too short on cash to attend. Upon reaching South America in 2012, only 200€ sat firmly in his pocket.

Always savvy, Manny took to Facebook, reaching out to riding community in hopes of a miracle. A fellow Italian – who happened to live locally – saw his plea and offered him a place to stay that week before the race. He welcomed his countryman's largesse while he tried to solve his next monetary obstacle. Little did he know that his faithful Romanian girlfriend and their two exotic-dancing roommates had a scheme of their own. On New Year’s Eve, she put the 2,000€ they earned dancing on a credit card for his expenses and he was, as they say, off to the races. He spent the entire race going from team to team, asking for used tires or spare bits, anything to get him to the end of each stage. And with the generous help of his lady, fans, and comrades, Manny reached the finish line against all odds.

In 2013, Manny had his second go at racing Dakar with only his father playing mechanic as best he could for support. As things tend to happen during the competition, he blew up his engine in a desolate part of the desert. Out of desperation, he began walking for any sign of life and eventually met a pair of Chileans. He asked if they had a truck, and thankfully they did.

"Good," he said urgently, but with his usual charm. "Look for my father, pick up an engine, and come back.”

Without skipping a beat they set off, eager to see him cross the finish line. After waiting for what felt like hours the Chileans returned with Manny's dad and engine and it was time to do a full engine swap in the middle of nowhere. By the time he finished it was 6:30 pm, and he’d have to ride all night through dunes to make it back to the bivouac only to arrive ten minutes before disqualification. As expected, he rolled in last overall, but he wasn’t out. And so, before he could even take off his helmet, Manny was back on the road headed for the next stage.

Anecdotes about Manny just roll off the tongue. For instance, his devoted grandparents allowed him to build his first rally bike – and every bike since – in their kitchen. Manny once gave us the after-dinner Grand Tour of Rome while explaining the history and monuments, suggesting points of interest, and occasionally pointing out the window at a busty woman in stilettos and a bra & panty set.

“That's a hooker,” he’d say in his thick accent and smile at us.

No… Really? But despite a well-versed knowledge of the seedier side of Italy, Manny doesn’t take part in the usual vices. For instance, he’s never tasted alcohol. When his high school friends pressured him to smoke cigarettes or do drugs to “look cool,” motorcycling had already done the trick. Meeting girls and collecting awards like trading cards, it had bolstered his confidence enough and he just didn't think he needed the help.

Manuel Lucchese is a go-getter, but many times he's struggled. Somewhere at the end of 2013, he had finished second go at Dakar with nothing short of mayhem to follow. His family had him arrested for various sordid reasons and changed the locks on the doors, he lost his sponsors, lost his rally bike, and he was sinking into depression. Broke, he and Ms. Romania lived in a series of hotels, paid for by her until he got back on his feet. She was patient. He could have fed off her generosity for months, but he wanted to make things right. Instead of rolling over and playing dead, he hustled. Noticing an opportunity to profit off the underselling WR250F, Manny, with two friends at his side to make him “look more serious ad professional,” pitched a rally kit proposal to Yamaha Italy using the unpopular product as a base. The idea was to bring attention to the motorcycle and develop equipment which he could ultimately use for himself. Win-win. When they concluded the meeting, his friends asked how the hell he planned to accomplish this huge undertaking if Yamaha was to say yes? This was a question to which he had no clear answer.

To everyone’s surprise – especially Manny’s – Yamaha took the bait. After all, it was a good idea. Problem was that he still had no idea how to pull off a project of this caliber essentially on his own. Yamaha expected Manny to produce the prototype with only the engine and frame as foundation and reveal it at the at the Motorbike Expo in Milan. That was just three months away! He had no money and no clue where to start, but with just a concept and his wits, Manny assembled a game-ending, Hail Mary play. Those professional friends of his were, in-fact, graphic designers and took little convincing to draft him a template, if you could call it that. He  then managed to persuade a few companies in Italy and Australia to develop the necessary components – in good faith – and wouldn’t you know, he unveiled the bike to rave reviews.

Yamaha Italy quickly started to sell the new rally-equipped motorbike. Then, settling for a lifetime of royalties on the sales, Manny took yet another risk. He had maintained ownership of the bike's design, so he used it to launch his own business – Rebel X. For three years, Manny worked hard to make his company appear bigger and better than it was, until finally it just became bigger and better. Smoke and Mirrors to make some magic. That kind of hustle isn't just limited to his business and racing ventures, though.

In 2015, Manny met a new love – Lucie, a pretty Czech woman who emigrated to Italy nearly 20 years ago. Though she doesn’t look his senior, Manny was only a kid breaking into Motocross when she made the trek to Rome. Her hobbies are painting landscapes, doing her nails, driving fast, and supporting her sweetheart on the off-road circuit. She lived in Belgium when they started dating, and for three months she drove back and forth to nurture their budding romance. But as Dakar neared, he put her to the real test.

That’s how he explained it to us over pizza at least, laughing in hindsight at how utterly shocked she was by his candidness. She didn’t want to come at first, but he persisted.

“In a relationship, we need to support each other, and right now, I need your help.”

It was on the plane to Argentina when Lucie realized attending Dakar meant traveling from bivouac to bivouac. Bivouacs which could be hundreds of kilometers apart. She knew nothing of motorcycle racing, let alone its most famed off-road race.

“With whom will I ride with between bivouacs?” she asked.

“I don’t know," he responded. "Worst case, you just hitchhike out of the bivouac. You’re a hot girl, something will work.”

Now she was livid, but Manny – with his carefree, bring it on attitude – fulfilled his prophecy. The couple met a group of Argentinians following the Dakar who had space in their vehicle. So, for the multi-thousand-kilometer and several-day rally, Lucie hitch-hiked (sort of) her way across South America to support her ultra-determined boyfriend race the Malle Moto class for the first, and then second, time. Over and over, Manny has taught me that when there’s a will, there’s a way.

To this day, Manny expresses sincere gratitude for the people who have supported him over the years. It was never quite clear how these friendships came to fruition, or why these people were so eager to aid his seemingly fruitless efforts, but one could guess. I mean, he’s built his entire life on a silver tongue, good spirit, and relentless perseverance. A perfect cocktail of characteristics that help Manny feel the only sort of buzz he’s ever desired – Glory.