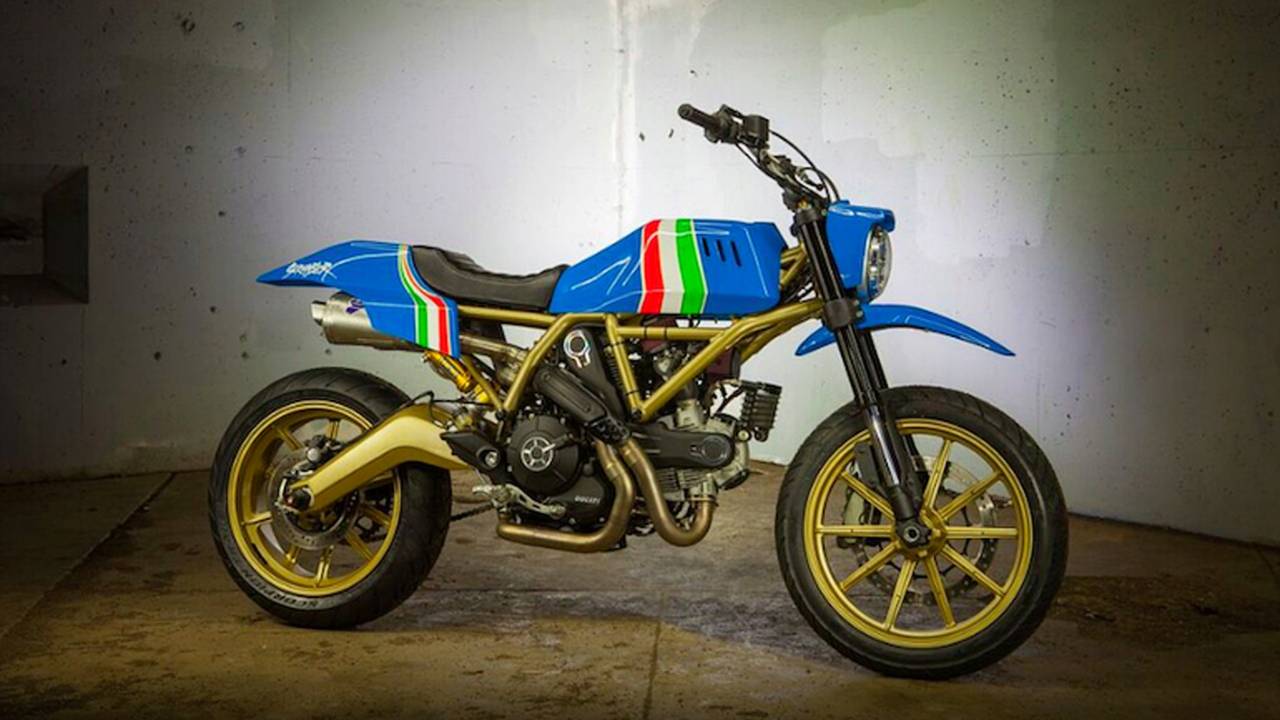 San Francisco-based tattoo icon, Grime poured more than 250 hours of work and a generous helping of upgrades into this bespoke Ducati Scrambler Icon.

The entire purpose of Ducati’s Scrambler range is to tap into a younger market that otherwise wouldn’t be interested in the traditionally exorbitant offerings from the Italian marque. In tandem with the release of the Scrambler line, Ducati has utilized hip events and individuals to help promote the range of bikes. One of these efforts is Ducati’s Maverick program which takes industry icons from creative fields and pairs them with a local Ducati dealer to customize a Scrambler. The first bike from said program was built by famed tattoo artist, Grime, and after finishing touring the motorcycle show circuit, it’s headed to the auction block of the upcoming Mecum event in Las Vegas.

Originally from Colorado, Grime moved to San Francisco, California in the mid 1990’s, just prior to the dawn of the city’s golden era for graffiti. Grime came up with legendary writers like Twist, MQ, and a myriad of MSK members. Having now been tattooing for two-and-a-half decades, Grime has built a reputation that has lead to interviews with outlets like Complex and Vice, a multi-year long waiting list for tattoo appointments, and of course, some pretty nifty offers from motorcycle manufactures.

The left side of the build

MORE SCRAMBLER STORIES: 22yr-old sets out to ride around the world on Ducati Scrambler

“We believe GRIME’s art and style exemplifies a freedom of expression that embodies the spirit of motorcycling and that of the Scrambler brand,” said Jason Chinnock, Chief Executive Officer of Ducati North America. “He’s used his uncapped creativity to design a masterpiece, which we’re bringing to Las Vegas as a gift to the world of motorcycling and the Shriners Hospital for Children, whom GRIME has chosen as the recipient of the auction proceeds. It’s our way of supporting Mavericks everywhere and helping the altruistic community that nurtures those Mavericks.”

Ducati North America connected Grime to the Marin Speed Shop, San Francisco’s local Ducati dealership, located just across the Golden Gate Bridge. From there Grime took order of a new Ducati Scrambler Icon which was promptly torn down and readied for customization. The San Francisco-based artist drew out a design for a custom tail, headlight cover, and slitted fuel-cell. The sketches were then used to transform steel and aluminum into the desired shapes before they were adorned in a blue, red, green, and white livery—a nod to the colors of the Italian Football Federation.

Grime posing with his custom Scrambler

The custom Grime-built Scrambler heads to Mecum’s Las Vegas Motorcycle Auction at the South Point Hotel, Casino & Spa on June 2, 2018. All proceeds from the bike are being donated to a charity of Grime’s choice, which reportedly happens to be Shriner’s Hospital for Children. You can click here to check out the Maverick Program Scrambler’s lot, or click here to check out the rest of the lots for the upcoming Mecum event.

Check out Ducati's video for the build that includes an interesting interview with Grime.