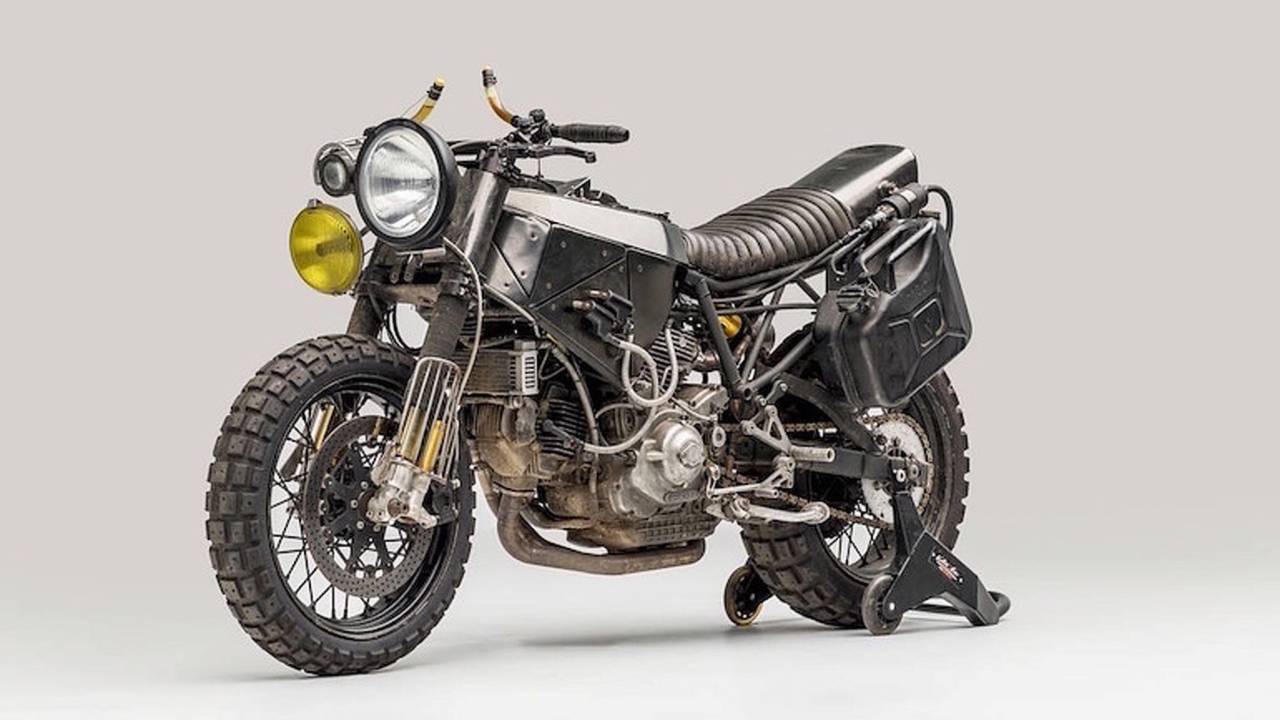 Custom motorcycles allow builders to express themselves through the creation of unique one-off two-wheelers. However as more and more customs are built that utilize similar formulas, the element of originality associated with bespoke bikes is increasingly becoming lost. This realization is what lead Spain’s El Solitario Motor Co. to designing the “Petardo”. Spanish for “firecracker”, the L-twin powered custom is the shop’s tenth build, as well as it’s most ambitious. It's also our choice for this week’s Bike of the Week.

David Borras—who heads up the Vigo, Spain-based outfit—described the ethos project as an effort to, “Destroy the current trend that dictates a minimalist approach to electronics & other components in a custom motorcycle.

“In fact, we now believe that hiding all the necessary equipment that makes a motorcycle fast is a coward-ish, hideous, pointless job," said Borras. "All organs like the gas tank, switches, pumps, coils, regulator, cables, and hoses are on the outside and linked in dadaist un-harmony. We wanted to embrace and empower the veins and arteries that move the body.”

The El Solitario crew started the build with the engine from a 1993 Ducati 900SS, and the frame from the supersport’s little sibling, the 600SS. The 600’s chassis was hacked up a bit in order to accommodate the larger mill, and a new subframe was fabbed up and swapped in to replace the stock unit. Hand-beaten alloy bodywork adorns the modified frame, hiding the battery and other ancillary electrical bits in the tail section.

The jerry can on the tail section serves as the bike's primary fuel cell.

The gas tank has been replaced by a 2.5 gallon jerry can that’s mounted to the left side of the tail section where a pannier would normally be positioned. Keeping in line with the build’s “embracing the veins and arteries” ideology, the shop put the fuel-cell’s external pump and dry-break lines on full display.

Solitario has replaced the gas tank with a large array of instrumentation dropped into a bespoke, handmade housing panel. The SS is now displays fuel pressure, oil pressure, temperature, voltmeter, exhaust gas temperature, and Lambda Sensors to calculate each cylinder’s air/fuel ratio. The cockpit is more in line with something one would expect to see in a an aircraft or race car.

A custom exhaust system was created, consisting of several dozen pieces of tubing which were individually bent before being expertly welded together, forming the two snaking pipes feeding into a bespoke pair of mufflers.A handmade heat guard was formed out of thick metal wiring—a feature seen on other parts of the build like on the lighting and front suspension.

Speaking of which, at some point after the build was originally completed, (as seen in the photos with the black background), its forks were replaced with an ultra trick set of Öhlins units (with a custom Öhlins shock) off of a Ducati Desmosedici RR. The super high end suspenders are protected by hand made metal wire covers to keep the Öhlins safe while remaining visible. The forks’ upper legs are adorned in a rough black coat, matching the frame, subframe, and swing arm. Custom triples were machined to marry the trick forks to the 600SS’ frame.

Everything looks cooler when photographed next to a fog machine

Up front, light is provided by a three-lamp setup boasting two large round lights—one yellow and one white—and a third, smaller round beam shrouded in a metal wire cover. The taillight on the build is comprised of three horizontal, rectangular, 17 LED strips sunk into the back of the tail section. The two LEDs on the far right side of each strip is slightly larger than the rest of the mini lights, providing an interesting looking effect when lit up in the dark.

All of the braking equipment on the machine consist ISR hardware, and the rear-sets have been replaced by aftermarket units that were coated in the same material as the frame and swing arm. Wide tracker-style handlebars now sit atop the forks, capped off on each side with black leather grips that match the handmade saddle. The levers appear to be one of very few stock parts that remain on the finished build. A fender eliminator kit keeps the build street-legal and cleans up the back of the bike.

Keeping with the exposed mechanicals theme, the Ducati’s timing belt covers and clutch cover were removed to expose the mechanical workings hidden beneath. The wheels were replaced by large spoked units powder-coated in black, wrapped in knobby rubber, and held via custom longer-travel suspension to give the “Firecracker” better ground clearance.

The Petardo in its intended environment

I had seen photos of the Petardo, but it wasn’t until I recently saw it in person at a show that I came to fully appreciate the build for what it is. There are so many minor details hidden throughout, such as filling in the spaces in between the tubing of the swing arm, who does that? Ultimately El Solitario did a stellar job achieving its goal of delivering a truly original build that breaks the mold of current cafe racers and other genres that hide the inner workings and ancillaries that make bikes go.

For these reasons, we’ve selected El Solitario’s Petardo as this week’s Bike of the Week. If you’ve got a bike that you think deserves to be RideApart’s next Bike of the Week, drop us a line at info@rideapart.com.