Weekend WTF: Getting Back On After An Injury 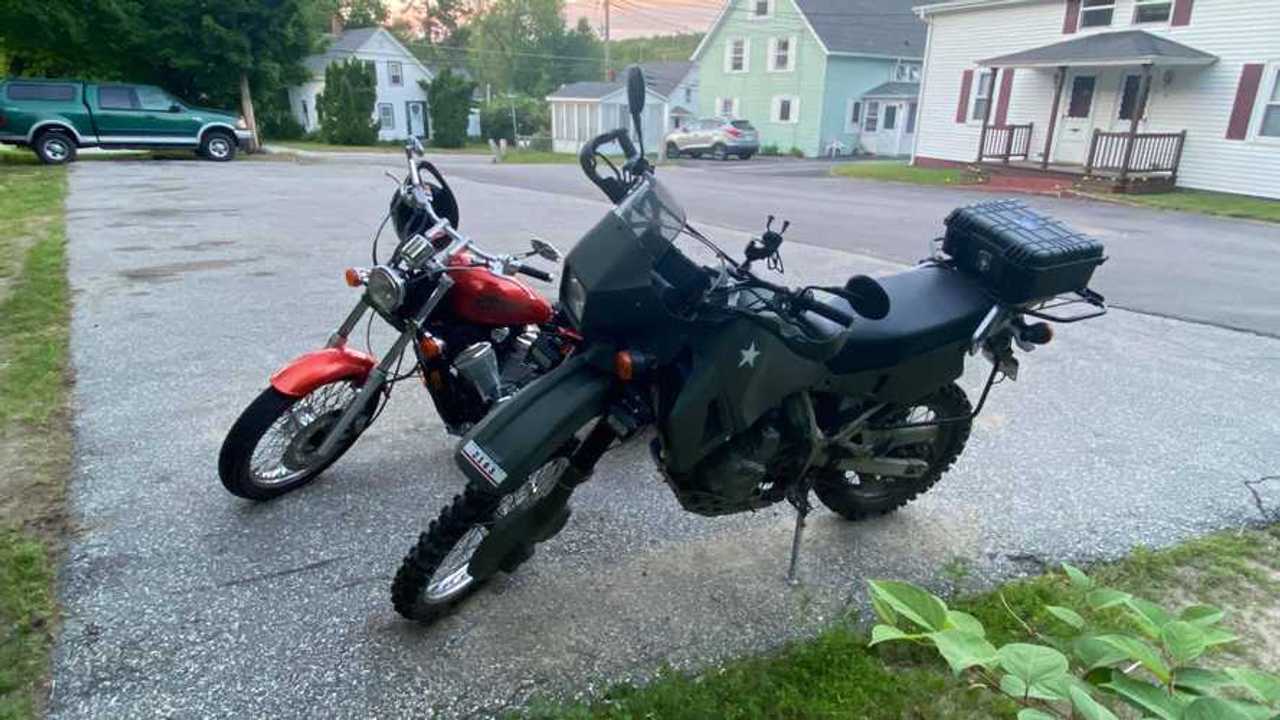 The desire is there. The strength is not.

"Today marks the beginning of the two weeks with the most daylight in 2020," the post on my local riders' group read. "The long-range weather looks outstanding. Make hay while the sun shines, my friends. It is good to be alive with a motorcycle." Unless, of course, you have a motorcycle but can't ride it.

Three months ago, I broke my foot—ironically, while getting my bike out of winter storage. Since then I've had what looks like a mending brace from Home Depot and a bunch of screws implanted into my heel bone. I'm walking with crutches now, never having completed my Hardly-Ableson knee scooter modification project. I've only started crutch-walking in the past week or so. Although the bone is healing well, my right leg no longer has the strength I need to hold myself up on the bike with my right foot, a skill I need in order to put the kickstand up. I need it to operate the rear brake, too, but that doesn't require as much force as simply supporting the bike at a stop.

How To Ride A Motorcycle Again After Your First Crash

We've covered at length how to shake off the dust and get back on a bike after a crash. My incident did not involve a crash, but jumping off an automatic gate that refused to open for my motorcycle. The usual elements of analyzing what I did wrong aren't there (it's simple, I'm too old to be jumping over fences), nor is getting over my fear resulting from the crash that didn't happen. My struggles are purely physical, regaining the strength in my right foot and leg to hold the bike up. Every day is a little bit better, but I'm still not quite at a point where I can do it. Believe me, I tried.

That doesn't mean I've been ignoring the bike lately, though. Now that I can handle stairs better than an old school Dalek, I've started fiddling with it again. It took nothing more than some extra cranking to start it back up after sitting another three months after winter storage. I installed the driving lights I picked up last fall, though missing tools I haven't used in months have thwarted me from wiring them up yet. The chain needs a thorough cleaning and lubing. I picked up a second set of wheels and am in the process of installing new tires, some more pavement-oriented Shinko 705s, since in my condition I'm not going to be tackling dirt the way I was. Once the Shinkos are mounted and balanced, I'll need to swap them onto the bike, saving the other wheels and their knobby Dunlop D606 tires for later.

Today's weather was absolutely perfect for a ride. It killed me that I couldn't go. Since I recently became able to drive with my right foot again, though, I took my Subaru WRX for a recreational drive on one of my favorite local motorcycle loops. It's very much not the same as a motorcycle. It was still fun, though, and with the windows and sunroof open I could feel at least a little more connected to the world than if I sealed myself up in automatic climate-controlled comfort. I'm a car enthusiast as well as a motorcycle nut, though, so I still had fun—just a different kind.

The main thing I can do to get back on two wheels at this point is to keep following doctor's orders. Everything about my surgery and recovery has gone extremely well to this point. I've begun the slow process of rehabilitating my muscles by walking again, but it's a long road. In another two weeks, after more X-rays, I may be allowed to start putting some actual weight on that foot. Once I can, I expect I'll be able to ride before I can walk unassisted. I can't push too hard, though, or I risk causing more damage that will make my recovery take even longer. That would keep me off the bike longer, and I can't have that.

I'm still determined to make sure my KLR is 100 percent ready for me by the time I can right, though. I even bought a collapsible cane that I can fold up and shove in a saddlebag to help get to and from the bike. I'm serious about getting back on. As with all things in motorcycling though, I need to find the appropriate balance between the risk and the reward. Few things are more important to me than motorcycling, but the ability to walk is at the top of that list for me right now.