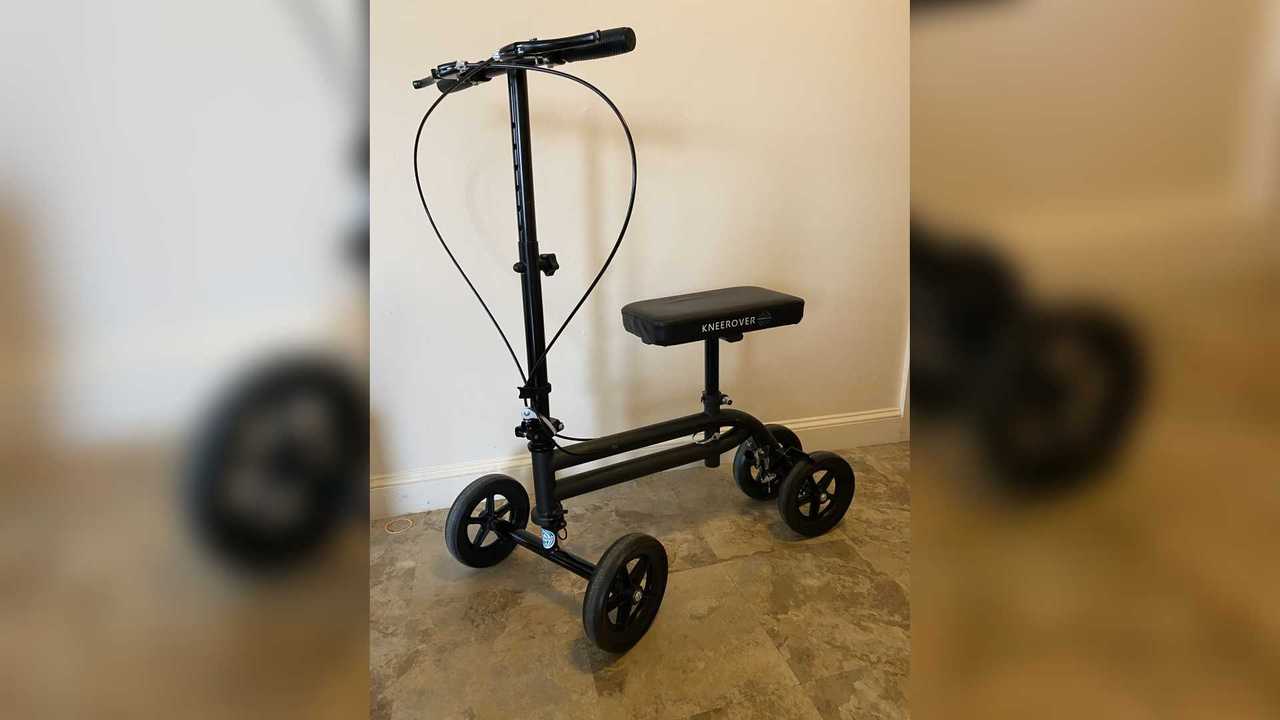 One way or another, I'm going to keep riding.

I can't ride motorcycles with a broken foot. I am also as graceful as a baby giraffe on crutches, which is to say, not at all. When my friends sent me links to various models of the KneeRover, which would allow me to roll around the house rather than teeter, totter, and fall, I was intrigued. I'm much better with wheels than I am with sticks. On top of that, I could fool my brain into believing I was riding my motorcycle, even if all I am doing is rolling myself from one room to another. After checking the balance in my HSA, I ordered one on Amazon for $99. I got the least expensive model they offer, the Economy KneeRover in basic black.

The bike arrived in a box that, with the help of the UPS driver, I was able to maneuver in my front door. Because I live alone, I had no one to object to me assembling the scooter in my living room, something most significant others would object to. This was an extremely simple process, requiring no tools at all. The KneeRover breaks down small enough to fit in the trunk of a small car, so you can take it to work or the store with you. This is a great feature, but one I won't be using because I have enough space in my van to carry it fully deployed.

What Happens When You Buy A Bike From Amazon?
⠀

Can A $2,500 Bike Bought On Amazon Survive A Torture Test?

Some may argue that the KneeRover isn't a real bike because it has four wheels. I would counter that the track of the rear wheels is so narrow that they might as well be just one wide wheel. They have to be narrow so that the one foot-power engine has space to clear the back wheels while pushing it along. The track is wider in the front, making it very much like a CanAm Ryker in this regard. Acceleration is quick, but its top speed is low, only about three to four miles per hour.

It's not designed to handle higher speeds than this, though, which is clearly evident when you look at the brakes. Rather than Brembos with multiple pistons, the two brakes—operating only the back wheels—operate simply by cables pulling on levers that press the other end against the solid rubber wheels. This design is quite similar to the wheelchairs I've test-driven in the past. I suspect you'll get more stopping power from engine braking than the brakes themselves.

They do, however, have one feature you won't find on many motorcycles: a parking brake. Each brake control has a button you can push down while pulling the lever, locking it into position. This is particularly handy to stabilize the KneeRover while standing up, sitting down, or negotiating stairs, and a vital safety feature.

More expensive models of the KneeRover feature a small basket you can hang on the handlebars. Because I was cheap, I didn't get this. I tried to attach a small milk crate—I am a Kawasaki KLR 650 owner, after all—but was unable to prevent side-to-side rotation on the particularly long handlebar stem. In the end, I simply hung a small backpack over the front of the handlebars. This works great for transporting drinks, medications, and anything else I want to keep with me at all times in my travels.

The KneeRover is great in stock form. It has truly improved my personal mobility and quality of life for the better. Being me, however, I can't leave anything well enough alone. Since both my KLR and camper van projects are on indefinite hold while I get back on my feet again, I'm turning my creative efforts toward my little scooter, which I have named the "Hardly-Ableson." While often used as a derogatory term for Harley-Davidson, I mean it only in reference to my own condition, and not to put down the fabled American motorcycle manufacturer.

In fact, I'll be drawing inspiration for my build from one particular Harley, Shadetree Surgeon's FXR. Many of you won't consider a medical mobility device to be a "real" bike, so to prove you wrong I'm going to apply his recommendations to transform my KneeRover into one. After modifying his so-called "Crusty Glide" in the tackiest, most tasteless way possible, Shadetree claimed that his worn-out Evo engine was making 400 horsepower (not dyno-tested, of course). I'm looking forward to seeing similar improvements out of my KneeRover.

I plan to do this in stages. My Stage 1 tune involves modifications using only items I already have lying around the house. After all, we're supposed to be staying at home and practicing social distancing during the COVID-19 epidemic, and I wouldn't want to put anyone in any extra danger for this stupid project. Once this all blows over and we're enjoying a pint at the Winchester (don't drink and ride), I'll go for a Stage 2 tune, which will allow me to actually spend money on things once our infrastructure can handle it again. Keep your scanners peeled to see how I transform this personal mobility device into a lean, mean road machine that would not be out of place parked outside your local biker bar.