The Legend of Patti Waggin: Burlesque Dancer and Motorcycle Racer 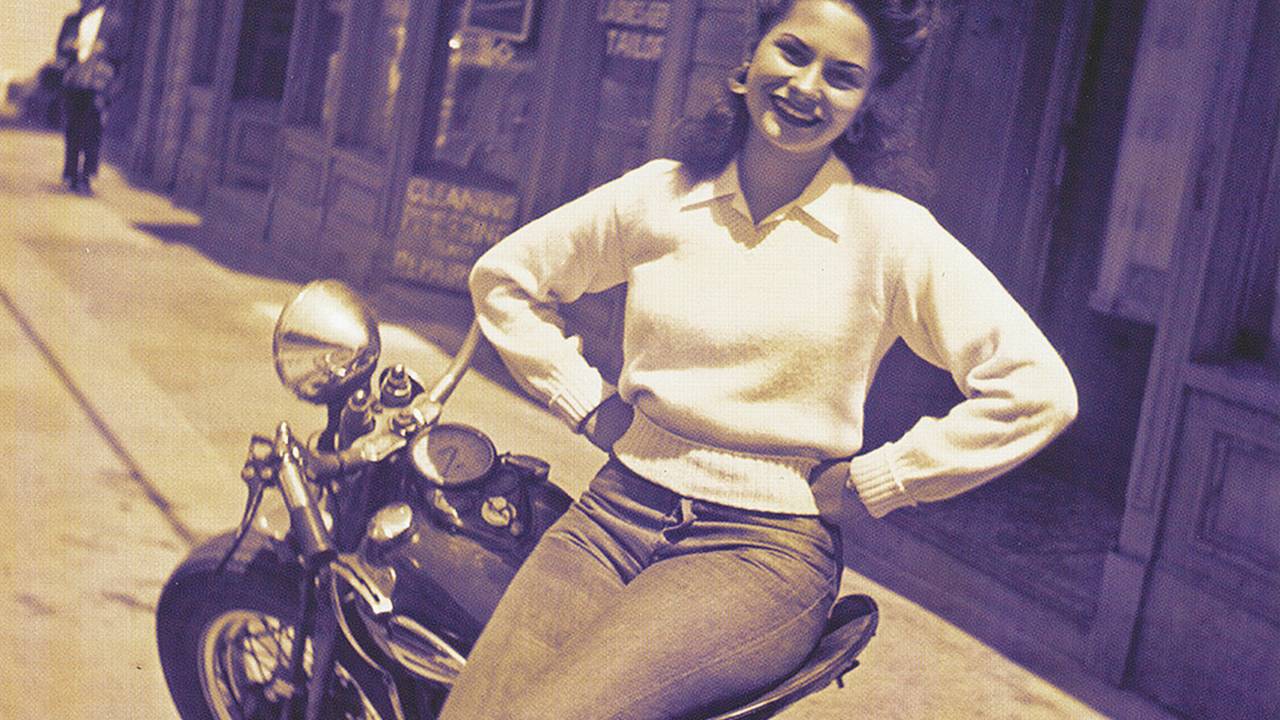 The Legend of Patti Waggin: Burlesque Dancer and Motorcycle Racer

Beautiful women have been making mediocre motorcycles look good, since the first powered bicycle hit the road. It's a pretty simple formula: ordinary motorcycle + scantily clad beauty = awesome photo. Scores of motorcycle publications have been based entirely on this formula and have done quite well for themselves. What separates the beauty above from the usual eye candy was that she could actually ride a motorcycle. Her name was Patricia Hartwick, although most people knew her by her stage name "Patti Waggin."

Patricia was a natural athlete and used her strength and agility to enhance her popular on-stage performances.

Born in 1926, Patricia was raised by her mother in Northern California along with a bunch of half-brothers. While we know that Patricia's mother was a former stage dancer, her father's identity is unknown. In the days before paternity testing, the best Patricia's mother could do was to narrow it down to another dancer or an Italian stagehand... Either way, performing was in her blood along with a love for competition which was probably the result of growing up in a house full of boys.

Patti posing for a picture at the starting line of an enduro in California on her Indian bobber.

As a young girl, Patricia had two loves: Doug Craig and motorcycles. The timeline is a little hard to follow here as we have Patricia starting to compete in local motorcycle races at age 14, her love interest Doug was leaving to become a motorcycle mechanic for the US Army during WWII and their marriage in 1942 when Patricia was just 16. It is unclear if Doug introduced Patricia to motorcycling or if she met him through motorcycling, but either way it was the love of two wheels that she would keep for the rest of her life. Doug on the other hand, was not so lucky. A few years later the couple divorced and Patricia packed her bags for Chico, CA.

The fresh-faced girl next door, Patti was destined to be a star with her engaging smile, charisma and love for motorcycles: What's not to like?

Patricia's main reason for moving to Chico was to attend Chico State College where she intended to get an education, which was something her parents had never achieved. While in school she gave theater a try, getting a part in a production of Pinocchio, but soon found out that working nights on the burlesque stage was much more lucrative. She actually used the money to put herself through college, (How many times have we heard a stripper say that? Uh, quite a few actually - Ed.)  On stage she danced under a variety of names including The Educated Torso, The Sex Oomph Girl, the Fresh-Faced Girl Next Door and of course Patti Waggin. Motorcycling still played a role in her life and she spent many of her weekends working at the Nor Cal dirt track races. This time she wasn't competing, but was paid to hand out trophies to the winners. It likely that during one of these events that she met her next husband, Bill Brownell.

Handing out the first place trophy at an offroad race in California.

Bill turned out not to be just another weekend warrior, hitting the track on his day off, but a real motorcycling legend. Besides being a successful dirt track racer, winning events up and down California, he also started an Indian-Cushman dealership in Chico, which grew to include Triumph, BSA and Honda. In the 1960's he help found the Cycleland Speedway which was a big draw for dirt track racers for 20 years before switching in Outlaw Karts in the 1980's. Brownell was also a member of the Booze Fighters Motorcycle Club and in 1999 was inducted into the Indian Motorcycle Hall of Fame.

Patricia and Bill Brownell at the track. It was a more simple time back then: Fast bikes, no rules and beautiful woman by your side. Lucky dog.

Being a savvy businessman, Bill capitalized on Patricia's budding fame to help draw crowds to the motorcycle races with Patricia continuing her role as the trophy girl. People could not get enough of Patricia, both on and off the stage and her story was featured in several men's magazines. The idea of a "motorcycle stripper" definitely sparked the imagination of their readers. Unfortunately for Bill, their marriage only lasted a few years and by 1950 they were divorced.

Pin-up photos like this were popular with American servicemen during the Korean War.

After her second marriage was over, Patricia's career on stage really took off. She hit the road and began performing all across the US. Soon she appeared on the list of top 10 strippers in the country.  Her act brought in a lot of service men as well and with the start of the Korean War, her pictures were in high demand by American GI's overseas. Patti also caught the eye of Hugh Hefner who featured her in the October 1955 issue of his new publication Playboy Magazine.

Patricia was the headliner at the Burbank Theater for a while. Her dancing career was really starting to heat up at this point.

The 1950's also brought another marriage for Patricia, this time to left-handed minor league pitcher named Don Rudolph. Don played in the Chicago White Sox farm system and soon took on the duties of manager for Patricia while continuing to play baseball. As manager he was able to schedule her performances to coincide with the locations of his away games so they could be together as much as possible. As part of his contract, Don was not allowed to ride motorcycles, so Patricia gave up riding on two wheels and switched to racing go-karts.

Racing along on an Indian wearing all the necessary protective gear of the era: A headband and boots...

Patricia hung up her pasties and fishnets in 1960 to settle down and raise a family with Don. They had one daughter in 1961 and in 1963 he was called up to pitch in the Major Leagues for the Washington Senators. After two years with the Senators, Don retired from baseball and focused on his company, California Underground Utilities. In 1968, Don was killed in a trucking accident. Although she was devastated by the loss, Patricia did attribute riding her Harley-Davidson motorcycle along with support from friends and family as the things that helped her carry on. Patricia never remarried and passed away at 66 years of age in 1992.

Patricia along side her 1940's Knucklehead.

Throughout her career, Patricia made it a habit to answer all her fan mail. Many of these letters have survived and have been published in a book titled "Fan Letters to a Stripper:  A Patti Waggin Tale". Author Bob Brill has assembled the letters along with 280 photos of Patricia into a book that gives an interesting look inside the world of a burlesque dancer as seen through the eyes of her fans.

There is some controversy inside the entertainment industry regarding who wore bangs first: Patti Waggin or Betty Page.