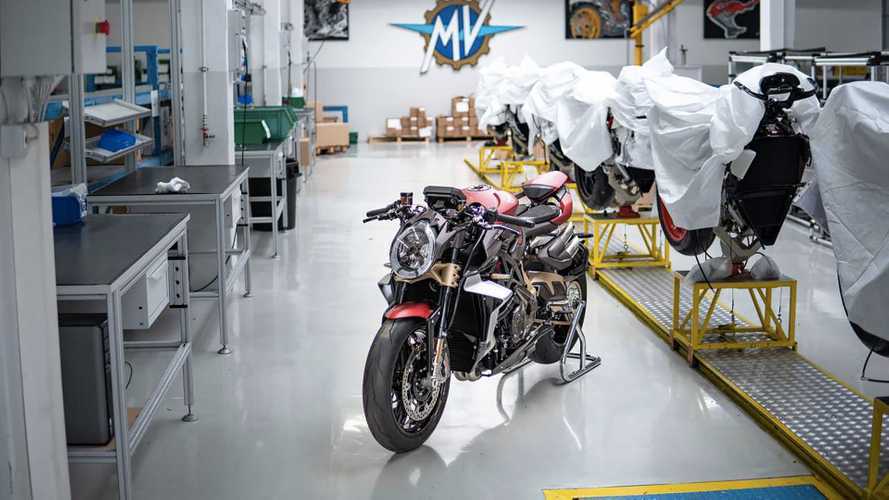 More dramatic measures are being taken.

UPDATE March 25, 2020: As the number of COVID-19 cases and associated deaths continues to grow despite the lockdown imposed by Italian authorities, more measures are being taken to help slow down the epidemic. On March 22, the Italian Parliament signed a new decree that tightened the regulations around the country.

Both Piaggio and MV Agusta chose to remain active since the country-wide lockdown was announced on March 9, 2020. However, the new decree forces the two companies to put their activities on pause.

The Piaggio Group (which also includes Moto Guzzi, Aprilia, and Vespa) announced that its Pontedera, Mandello del Lario, Noale, and Sorzè facilities will be closed at least until April 3. For the time being, the company's plants in Vietnam and in India remain active.

As for MV Agusta, the company released a statement saying that starting March 26, production at the Schiranna facility will be put on hold until further notice. To continue to provide support to suppliers and customers, the employees who are able to will work remotely.

While the production of the flagship models assigned to the Varese plant could be affected by the hiatus, production of the mid-size models in collaboration with Chinese manufacturer Loncin Motor should stay on target.

UPDATE March 18, 2020: Time has stopped for a number of manufacturers with offices in Europe. Yamaha confirmed its France and Italy facilities would remain closed until March 22 while Ducati has stopped its activities in Borgo Panigale until March 25. As for Brembo, production will remain at a stand still until March 22 as well while Moto Morini will extend its shutdown until April 3.

Despite the measures being taken worldwide, MV Agusta released a statement confirming that it had no plans to suspend its activities. The numbers of workers on site has been reduced and the proper sanitization and safety measures are respected to ensure the employees' safety however business proceeds as usual.

As for Piaggio and its subsidiaries—Moto Guzzi and Aprilia—production resumed after a three-day hiatus due to one of the employees of the Pontedera facility testing positive for COVID-19. Sanitization measures were taken and the production line was reorganized to respect the recommended one-meter safe distance between workers.

UPDATE March 16, 2020: The effects of the measures being taken to help slow down the spread of COVID-19 are starting to hit. Ducati and Moto Morini became the first Italian motorcycle manufacturers to suspend their activities following the nation-wide lockdown announced by the government on March 9. Ducati confirmed the shut down of its Borgo Panigale facility. The company plans to gradually restart production as the situation allows it.

Brake component manufacturer Brembo has also suspended its activities and its Bergamo facilities will remain closed until next week. The closure could have important repercussions both in the automotive and motorcycle industries considering Brembo's impressive list of clients.

Yamaha has also announced that it has suspended production at its Italy and France facilities and that the offices will remain closed until March 22, 2020.

We have yet to hear from other companies such as MV Agusta and the Piaggio Group regarding a potential impact on their activities so for now we can assume that production is still ongoing. Italian media reported about a Piaggio employee in the Vespa factory who was diagnosed with COVID-19. Measures have been taken to quarantine both the patient and the people he was in contact with.

UPDATE March 13, 2020: Moto Morini announced it was temporarily halting production. A partial translation of Moto Morini’s official statement reads, “We are obviously worried, but also certain that we will overcome the emergency and start growing again. Italy has the ability to do it: we are a structurally strong country. We will surely overcome the crisis by acting with unity of purpose and spirit.”

“To all those who have been working on the front lines since the beginning of the emergency, risking their safety to guarantee us a return to normal, our warmest thanks and the guarantee of our commitment to comply with the directives, which is the only way we have to really help them,” the statement continued.

UPDATE March 9, 2020: As of March 9, 2020, the Italian government announced that the entire country is now on lockdown as the number of confirmed cases in the country continues to increase. This means that the measures imposed on some of the Northern provinces on March 8 now apply to all of the country, impacting 60 million residents.

We spoke with a resident living in the Piemonte region to get a sense of how the lockdown impacts the daily activities. He explained that people are allowed to go to work and to run essential errands such as groceries. Employees who have the possibility of working remotely are invited to do so.

At a corporate level, he added that at the moment, companies that rely heavily on shipping and receiving are mainly affected in their delivery process. For instance, truck drivers in charge of picking up and delivering goods cannot step out of their truck without proper protection (masks and gloves). Another local described the streets of Milan—Italy's business hub—as completely empty.

While the Italian industry is taking a hit, as shown by the dropping stock market, as we write this, there is no mention of a concrete impact on the activities of the biggest motorcycle manufacturers in the country. Italian media SecurAuto reported on March 6, 2020, that Piaggio had taken certain measures—including installing hand sanitizer dispensers, limiting the number of meetings, and encouraging conference calls with external clients and suppliers.

For other companies, such as component manufacturer Brembo, the action plan included restricting access to its facilities for people who have been in direct contact with residents of the affected areas. While the motorcycle manufacturers themselves might not be hit as hard, a slow down at the suppliers' level could ultimately affect the output in a domino effect.

As things currently stand, the limitations are expected to remain active until April 3, 2020.

Governments around the world are taking increasingly more serious measures to protect their respective populations from the coronavirus (COVID-19) epidemic. From tightening border controls to emitting travel bans to cancelling events, every country affected by the bug is on high alert. Within a matter of days, Italy became the European epicenter for the disease after the number of cases exploded, now ranking third in the world after China and South Korea. Italian authorities have now signed an order to limit the movements of a quarter of its population.

The Impact So Far:

Italian Prime Minister Giuseppe Conte has ordered a lockdown on its second-most populous province alongside 14 neighboring others in the hopes of slowing down the spread of COVID-19. The quarantine affects 16 million people which will likely have an impact on the country’s business activities.

Before the lockdown, despite taking safety measures to limit the number of visitors in their facilities, Italian motorcycle manufacturers’ production hadn’t been affected by the epidemic. None of the companies have announced that the measure affected their activities yet but the lockdown could ultimately result in slower or even halted activities as travel is extremely limited within and between the quarantined zones.

The companies we are currently watching are Aprilia, Moto Guzzi, and MV Agusta that all have their HQs in the quarantined provinces. Considering Aprilia has its office in Noale, Veneto, Moto Guzzi in Lake Como, Lombardy, and MV Agusta in Schirana, Lombardy, the three companies could see their ranks diminish as people’s movements are limited and controlled. We reached out to Piaggio for a comment on the matter but have yet to hear back.

According to AlJazeera, people traveling between provinces without a valid, “not deferrable” reason will be fined. "This is not a ban on any movement, but citizens will have to justify them," Prime Minister Conte was quoted saying.

As for Ducati, the province of Bologna where the company has its office has been spared from the lockdown, at least for now. We will report back as the situation evolves in Northern Italy and as we hear from the companies potentially affected.