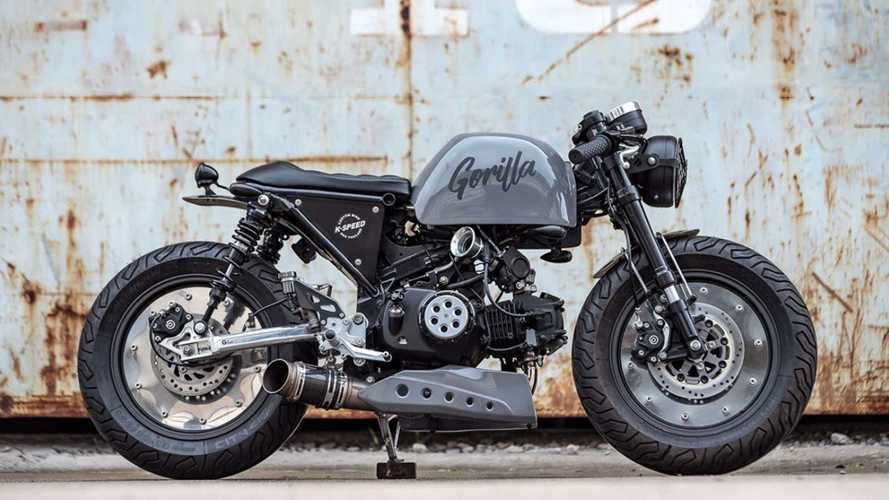 Bangkok-based K-Speed has been turning heads for some time now. From the cafe racer-inspired Honda Super Cub to a scrambler version of Yamaha’s XSR155, the Thai garage has pumped out some of the industry’s most noteworthy customs in a short timespan. It’s no surprise that K-Speed’s latest effort featuring the Honda Monkey is another master class of mini-bike makeovers.

Established in 2002, K-Speed fostered a particular style that toed the line of rugged and refined. The shop isn’t just known for trendsetting designs though, they’re also one of the largest aftermarket parts suppliers in Thailand. That production experience led K-Speed to assemble an in-house project featuring its catalog of parts.

Brand founder Eak—he only goes by one name, like Prince—grew up riding Honda’s adorable minimoto so the Monkey not only held sentimental value but also presented a unique canvas for customization.

“The new Monkey inspires my imagination to customize them,” he said. “It’s like making a new toy.”

Starting with a 2019 Monkey 125, Eak and team replaced the stock 12-inch wheels with a set of 14-inch aftermarket rims made for the Honda Grom. After bolting on a set of sturdy alloy wheel covers and fitting a pair of beefy Michelins, the Monkey’s posture was already more formidable.

To align the ergonomics with the new aggressive stance, the team added a set of clip-ons and lowered the front forks. With a set of YSS shocks suspending a lightweight aluminum swingarm, the builders packed on muscle and shed some weight.

Trimming further, the builders shortened the subframe, bobbed both front and rear fenders, and replace the side panels. While the minuscule power and reduced weight of the Monkey didn’t warrant top-spec calipers, K-Speed equipped the build with the robust bite-force of Brembo brakes anyway.

Aesthetically, Eak continued the oversized theme with the hump-backed gas tank cover that sits atop the existing unit. On the undercarriage, K-Speed attached a belly spoiler made of ABS plastic to help shield the over-the-top street fighter exhaust from road debris. Reminiscent of a Silverback, both pieces of bodywork were coated in Lambo Grey with Gorilla script emblazoned on the tank.

Finishing off the build, the team installed an LED headlight, taillight, and indicators. Aside from CNC-machining rear-sets and velocity stack for the project, most of the parts were bolted on by the custom shop. If the Gorilla is just a showcase of K-Speed’s catalog, it’s certainly a chest-pounding success and we can’t wait to see how other builders put their parts to use.