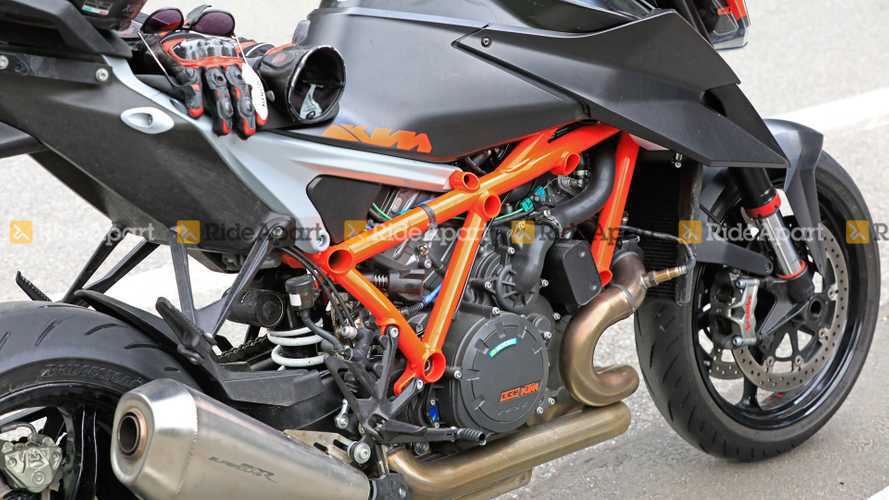 This is what happens when you find a stranger in the Alps!

Our best agents are at it again, and this time, in the mountains of Europe, they’ve been snapping photographs as unsuspecting test riders leave their motorcycles alone. Moose and Squirrel have been very busy with their cameras, and we’re reaping those benefits.

If these spectacular spy shots are any indication, KTM has completely and wholly redesigned their 1290 Super Duke R. The things everyone usually looks at first, namely, the headlight, gas tank, and front fairings, have not changed much from the previous generation. The rest of the bike, though, is nearly completely different. They’ve apparently lifted up the tank and front subframe and replaced almost everything under it!

The wheels are a different five-spoke cast design. The brakes look like the same double, two-pot Brembos that KTM uses to haul the current Super Duke R to a stop. The front suspension may or may not be upgraded: externally it remains essentially unchanged but who knows what goodies those Austrians have stuffed inside.

Here’s a fun part: the orientation of the water pump has changed, the water hose snakes up under the tank, and the photos of the test bike show what might be a custom modified pre-production radiator that accepts the coolant from a completely different spot. It's certainly lacking the fit and finish of the rest of the bike, so who knows what's going on there.

The motor is externally somewhat different, and set ever so slightly higher in the entirely redesigned half-trellis frame. It seems the engine is now even more of a stressed member in that frame. Its lines are simpler and more constant, and the frame’s mount points to the engine are more numerous and beefier.

The Duke R’s rear subframe has apparently been absolutely defenestrated and whole-cloth cast new. That interesting but cluttered looking rear trellis subframe is gone. The tail section now sports what looks like a very simple aluminum support with very clean lines. The tail sports a full-surround plastic cover underneath it, ostensibly to contain the bike’s wiring and shield it all from the road splatter that will inevitably come off the same tiny rear wheel cowl the last Duke R had.

The new swingarm is redesigned and definitely not the same as the old swingarm. The placement of the rear shock has changed too; it is forward of, and slightly lower than, its previous mount point.

Did we mention the exhaust yet? Because ooh, that pipe. KTM is perhaps taking a cue from Ducati’s styling and made that pipe curvier. Instead of covering it up, the bike shows it off now. That blobby can on the end has lost some volume (area, not noise) and gained some allure. Hopefully that system is more than a concept and will make it into final production, because wow.

Take a look through the spy shots and let us know what you think!