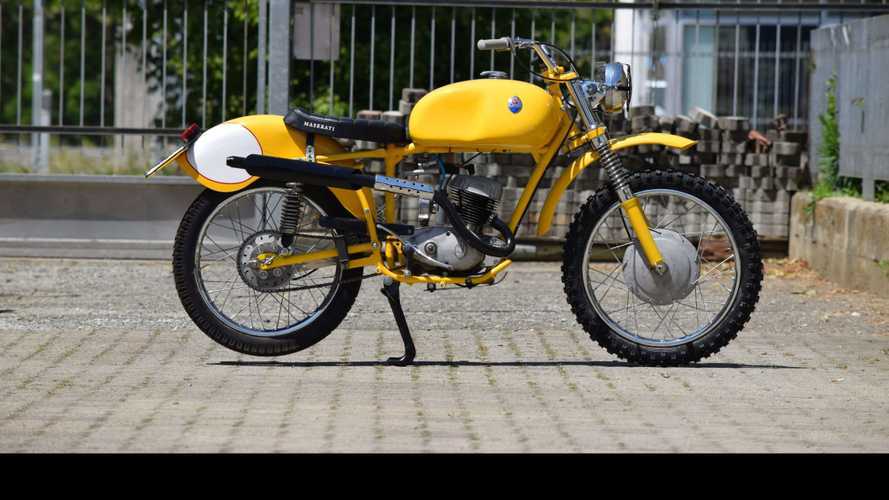 This isn't the Maserati you think you know.

Sometimes, if you’re lucky, you aren’t doomed to repeat history— instead, you’re lucky enough to get to appreciate it. Such is the case with this impeccably restored 1956 Maserati Regolarità scrambler that will soon hit the auction block in mid-June.

This striking 125cc scrambler variant was completely restored just two years ago, according to auction house Artcurial. But it’s important to note that although this has the Maserati name—and the famous trident badge—if you’re a car-type Maserati fan, these are not the bikes you’re looking for.

Back in October, our very own Professor Marker schooled us on the origins of the Maserati family tree. The motorcycle company bearing this marque seems to have started with a simple paperwork mistake that resulted in two separate companies—both the famous car manufacturer and the less-well-known motorcycle manufacturer—sharing both a name and a logo with no other discernible relationship to one another.

After accidentally twinning before twinning was a thing, the two companies developed independently of one another. The company purchased Italmoto and moved to Modena, where it produced a range of bikes between 125 and 250ccs. Even though the two companies had nothing to do with one another other than sharing a name, the halo over the name from the car manufacturer’s racing success seemed to drive the motorcycle company’s sales up as well.

Despite this early success, by 1960, there could be only one—and after some serious financial troubles, the motorcycle company unfortunately bit the dust.

In case you find that you can’t live without this beautiful piece of motorcycle history in your life, Artcurial has all the information you need if you want to bid—as well as plenty more photos.