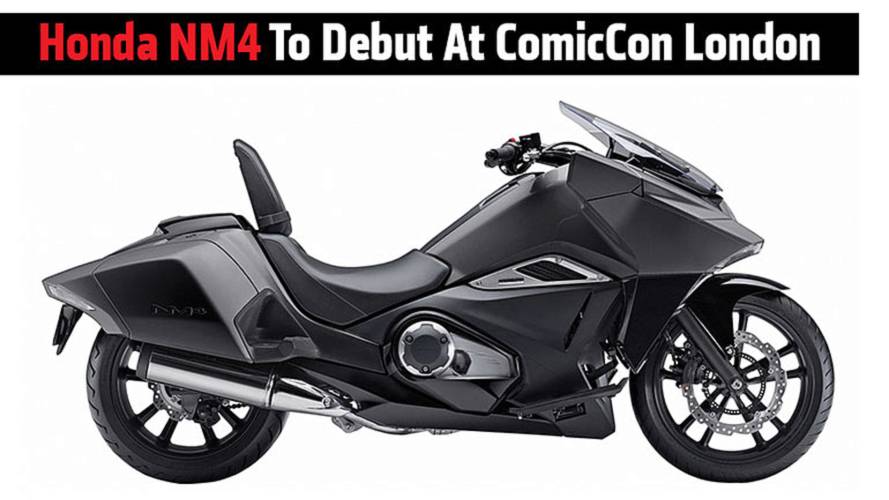 The Honda NM4 is set to make its debut at ComicCon London. The bike/scooter drew much of it's inspiration from the fantasy pages of famous Japanese comics.

If like me you grew up on a diet of Japanese cartoons you no doubt came across many of Honda’s inspirations for the new NM4. Previously codenamed the Vultus, Honda’s New Motorcycle 4 is a twin cylinder scooter / motorcycle hybrid with a feet-first riding position and wildly futuristic styling.

Drawing inspiration from the 1980s Manga serial comic Akira, the bike’s riding position is as unique as they come - the Honda NM4 is not a step-through design so the rider is straddling the bike, but the seat is low at just 25.6 inches and the handle bars are swept back behind an imposing, geometric fascia reminiscent of the humanoid robotic ‘mobile suits’ from the anime series Gundam Wing. Ingeniously the pillion seat can be folded forward to serve as a backrest which riding 1-up and can be angled forward and backward to find just the right position.

The controls are taken from a motorcycle, but simplified, the NM4 has a dual clutch six-speed transmission with full and semi automatic modes which eliminates the need for a shifter on the left foot, and while the right foot still controls the rear brake, the bike’s ABS system allows both brakes to be actuated by the brake lever on the right handlebar. Riding around town and on the highway promises to be a breeze with just two controls, both in the rider’s right hand, floorboards beneath the pegs, and a generous windscreen and fairing to keep the rider well protected.

Underneath that striking bodywork, the NM4 is powered by Honda’s 670 cc parallel twin, which exhibits a 270 degree firing order, much like a V-twin, but allows for a more compact packaging. The engine is tuned for low-end torque, and produces around 54 hp, more than capable of moving the NM’s somewhat surprising 540 pounds.

The bike’s turns signals are integrated into the front and rear bodywork which even accommodates four separate storage compartments - two small cubbies in the front fairing, one of which offers a 12 volt charger for a cell phone or GPS, and two larger paniers in the rear of the bike. The bike’s dashboard is a single, central LCD display with a variable color backlight. It features a central digital readout of speed above a horizontal bar-graph style tach as well as a gear indicator, trip computer, and temperature display.

The NM4 is due to make it’s European debut at this weekend’s London ComicCon where a partnership with Oculus will allow attendees to experience a virtual reality tour through Akira’s futuristic Neo-Tokyo. With this motorcycle, Honda is hoping to tap a new market of potential customers who will appreciate the bike’s friendly seating position and easy controls. Personally, I think it’s a great looking motorcycle with a feature list that will appeal to broad range of consumers, and I’m looking forward to seeing one on the road.