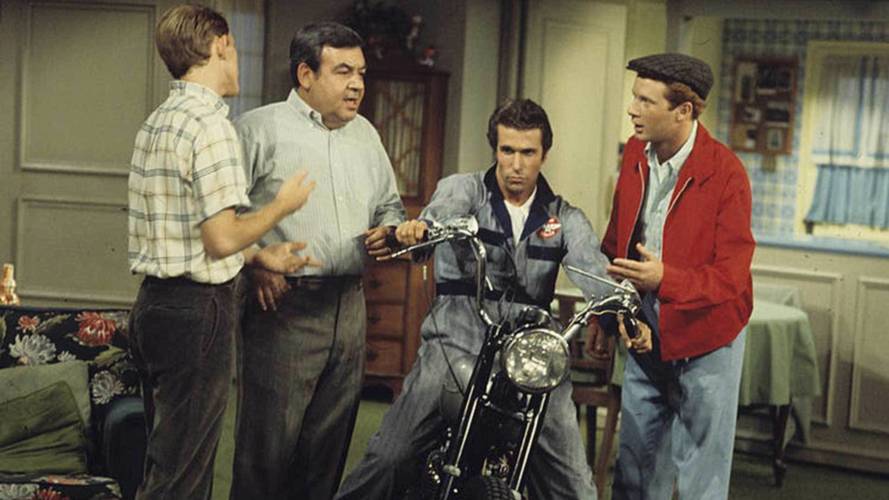 The Hollywood connection with motorcycles is long, slightly twisted, and legendary. In 1974, Garry Marshall created Happy Days, a nostalgic look at 1950s teenage America. To complete the look, a cliched and lovable bad boy was needed for the cast. Enter Henry Winkler playing the pompadoured, leather jacketed greaser Arthur "Fonzie" Fonzarelli. Fonzie was known for his roguish charm, his big heart, his ability to get machines to work just by hitting them, and his catchphrase, "Ayyyyyyyy." He was also known for tear-assing around 1950s Milwaukee on a selection of fine antique Triumphs, one of which has just went at auction for an incredible sum.

In Happy Days' first episode, Fonzie appeared on a gorgeous Harley-Davidson knucklehead, but this proved too much for bike novice Winkler. For episode two, the show's producers switched Winkler to a 1949 Triumph TR5 provided by famous Hollywood Triumph dealer and stunt actor Bud Ekins.

With the show in full production, the producers needed a running bike knocked together in just a few days. "We made it up from parts and things lying around." Ekins once stated in a Classic Bike interview from 1990. It proved to be the perfect choice, light enough for Winlker to handle and truly representative of what a 1950s teenager could afford.

Fonzie's TR5 rolled across TV screens for years until difficult starting and a sort of run down appearance caused the show's producers to switch to a custom 1964 Triumph T100ss. It wasn't just a different bike, it was even a different color. Never mind the continuity error—it also changed color throughout some episodes—no one cared. Pre-unit Triumphs like Fonzie's TR5 have long since hit 5 digit prices, but the Hollywood connection is worth something, in this case quite a lot.