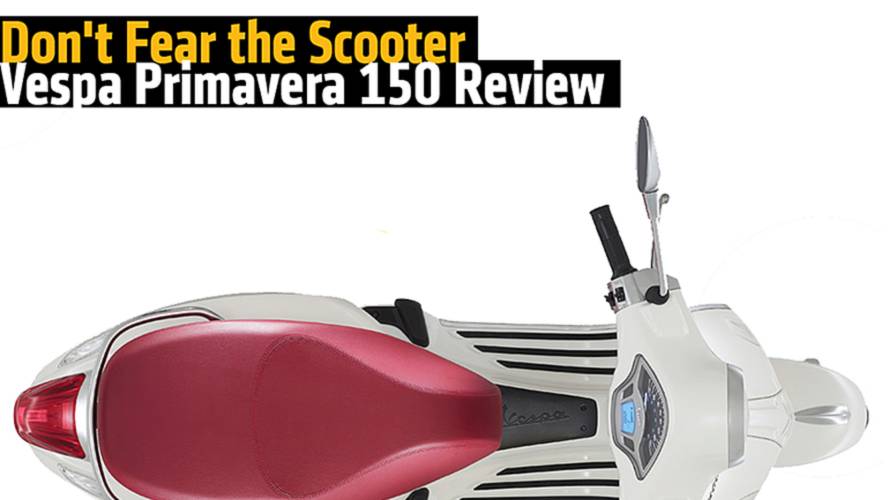 We review the 2015 Vespa Primavera. Does it carry on the Italian brand's tradition of combining style and performance?

Courage is not the absence of fear; it's the mastery of it. There are many variations of that quote floating around, and all of them were bouncing through my head when I took delivery of a 2015 Vespa Primavera for review. Motorcycles don't really frighten me. But scooters? Man, I think they're terrifying.

I know. A fear of riding a scooter makes no sense, but hear me out: When I see a scooter, I see a tiny, two-wheeled shopping-cart, powered by a lawnmower engine. That is NOT what I want to be on when riding in traffic, or at speeds above 15 mph. Along with the fear that I'm going to be run down by a minivan, there's also...well, the coolness factor. Scooters haven't been cool since The Who wrote a rock opera about them.

It's hard to picture "Quadrophenia" without the crazy scooters. (Yes, that's Sting.)

But a week with the Vespa Primavera 150 made me rethink the scooter, and its place in the motorcycle world. I live in the beach town of Carlsbad, north San Diego county; it's a labyrinth of surface streets, with lots of hills and a wide range of speed limits. And of course, there's plenty of SoCal traffic.

But if one so desired, one could get from Oceanside to La Jolla  - and even to downtown San Diego - without ever having to get on to a freeway. So...why not use a scooter? I learned that the 2015 Vespa Primavera 150 is actually a good-buy, easy-to-ride, fun means of two-wheeled transportation.

Let's get the Power Question out of the way. Is the Vespa 150 freeway-capable? Well, that depends on whether or not there are other cars on the freeway. Piaggio's official stat sheet says that the 150 Primavera's max speed is 59 mph. Without admitting to anything, I can say that the little Vespa cleared that, without complaint from the engine - or the rider.

The 154.8cc engine has a surprising amount of power; with a very pleasant growl, I surprised myself a few times, checking the speedo to see that I was going quite a bit faster than I thought. Since the bike's got an automatic transmission, torque delivery is near-instantaneous; if you're used to a clutch, it does take some adjustment. While I wouldn't take it on a freeway, I found it to be perfectly capable when riding on multi-laned parkways where the speed limits run from 50 to 60 mph.

This is where I can see the attraction. As far as comfort levels go, riding the Vespa must be the closest thing to tooling around on one of those electric Rascals that the old folks favor. There's a big comfy seat, your feet are resting nicely on the floor… it's downright cozy. I'm not a particularly tall guy (5' 10"), and was concerned about my knees being up on my chin when I first laid eyes on it but even so the small-looking scooter was very comfortable.

Unfortunately our Vespa did not come with beautiful women in pretty dresses.

Much of that comfort comes from the suspension. Both front and rear coils absorbed the occasional pothole and bump nicely. Engine vibration was minimal, likely due to changes in the engine mounting system for the 2015 model - the rubber-mounted engine also features an additional positioning arm. Or perhaps I didn't feel the vibrations in the grips and floorboards because I was wearing leather gloves and boots, and not the usual Vespa rider's choice (barehanding it, with Chuck Taylors on my feet).

Handling was great. The Vespa is maneuverable at all speeds - trips through my local library and grocery store parking lots gave me ample opportunity to see how well the Vespa turned at low speeds, and it would require considerable effort on the rider's part to drop it.

The wheelbase is 52.75" long, two inches longer than the Vespa LX, which helped inspire confidence at higher speeds. (As I said before - it's one thing to go fast on a motorcycle that you know is built for speed; it's quite another to push the limits of a scooter with 11-inch wheels.)

With my Shoei helmet and Icon Hypersport Prime jacket, I didn't quite look the part.

The brakes were on my mind during my time with the Vespa. As a new rider, I've become obsessed with the idea of anti-lock brakes; I'm not quite confident in my own abilities, and that coupled with the current wet weather we've been having in southern California had me concerned about the Vespa's braking. I'd be riding in traffic, and Californians are stunningly bad at driving when it's not 75 degrees and sunny out. I needn't have worried. The Vespa's front hydraulic disk brake with a rear mechanical drum brake made for easy stopping; in fact, I'd tell the Vespa folks to leave the brakes as-is for the Primavera, but the new GTS now features ABS and traction control for 2015. I found myself having a blast playing around with front-rear braking combinations, and would definitely encourage new scooter riders not to be nervous about stopping the Vespa.

I'll preface this by saying that if you're looking to get a minimalist scooter and have no desire or need to take freeways, absolutely consider the Vespa Primavera. But I do have a couple of minor quibbles.

Storage: The glove compartment is fine; plenty of room there to stash your cell phone, wallet, and other small items. There's a folding rack on the front of the bike. The under-seat compartment, however, leaves a bit to be desired. Granted, those looking to fully embrace the Scooter Life will most likely opt for a half- or open-face helmet, and the folks at Vespa claim that those will fit just fine in that space. My Shoei, however, did not.

The under-seat storage wouldn't hold my Shoei helmet. Also - do people really try to stuff their pets in here?

The Center Stand: Good God, did I come to hate the Vespa's center stand. The scooter is certainly not heavy - curb weight is listed at 268 lbs - but wrestling with that thing every time I walked away from the bike was a hassle. A sidestand would have been appreciated.

The Price: This is where the buyer needs to ask him- or herself what they want out of their scooter experience. The MSRP of $4,799 puts it right in there with bikes like Yamaha's new SMAX and other scooters that are bigger and freeway-capable. It seems to me that Vespa is selling a lifestyle - and there's certainly nothing wrong with that, but in terms of performance and even carrying capacity, there are scooters out there that offer more bang for the buck.

Like I said, my quibbles with the Vespa Primavera 150 were small ones. Overall, I had a blast riding it; while it's certainly different from riding a full-blown motorcycle, the little scooter proved to be a great performer in the niche that it was built for.